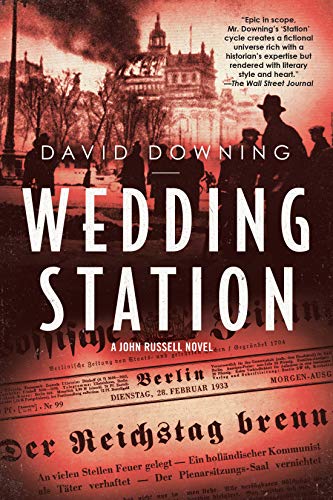 “Wedding Station is an ideal choice for both Downing fans and newcomers to his fast-paced and intense crime novels.”

David Downing’s novels of crime, suspense, and espionage have danced through both world wars. His Station series, six titles before Wedding Station, evoke the relentless terror of life in Berlin during World War II. Now, in a fierce and daring prequel, Downing reveals the back story to the propulsive series.

A British citizen with a “German” son from his first marriage, John Russell has no desire to leave the complex and culturally rich city of Berlin. But Wedding Station opens with the burning of the Reichstag parliament building, a display of political malice that Hitler’s forces deftly blame on “Communists” and utilize as a reason to crack down on liberty. Russell’s a reporter for the Morgenspiegel—it’s his job to dig into any crime aspects to the fire, as well as other events around him.

Since the fire’s an obvious fake, with the expected political posturing—“The German people would be expecting a vigorous response from their government, and harsh new measures would be announced over the next twenty-four hours”—Russell’s free to investigate other ominous shifts in the city. Within limits: The newspaper’s editor is already under enormous pressure to toe the official line, if he wants to keep publishing.

“This was what the seasoned professional journalists lived for, Russell thought. Exciting times. Only this was the sort of excitement that might well prove fatal to some of them.”

Within hours, life in Berlin shifts from cultural glory to silently witnessing corpses and abuse. And at work, Russell chases scraps of crime stories, like the death of a teenaged male prostitute, that become entangled with the power and sadism of the various Nazi forces and leaders. When his other leads turn up parallel threads, from a genealogist’s death to a celebrity fortune-teller’s disappearance, Russell’s relentless digging puts his personal liberty and safety at risk. Soon a professional beating comes to seem routine, and his choices narrow to what will put his son and his ability to be a father under threat. Or cost him his integrity and self-respect.

“Russell liked fiction as much as the next man, but he couldn’t imagine agreeing to lie for a living. Better to sidestep the issue . . . He had thought the crime desk might provide a safe haven but most of the stories he’d covered so far had political hazards etched right through them, like the letters in a stick of seaside rock. Which shouldn’t have come as a shock when the forces of law and order were the people committing the crimes.”

As a “foreigner” in a dangerous city, Russell’s becoming a sort of criminal himself, conspiring with the occasional halfway-human police officer to get murderers captured, hiding out for days on end, desperately trying to protect his son while seeing the child inevitably seduced by Germany’s new politics. Downing manages the painful transformations in thoughtful passages that never detract from the threat and tension of the situations that Russell deliberately puts himself into, in the hunt for both honest journalism and a personal stance against Hitler’s imposed regime.

Wedding Station (the title refers to a location in Berlin, Wedding, pronounced with a V sound at the start) is an ideal choice for both Downing fans and newcomers to his fast-paced and intense crime novels. As a “prequel,” it won’t require catch-up time, except perhaps for the alphabet soup of the various German groups menacing Berlin. And as part of the series, it’s a marvelous exploration of how John Russell steps out of ordinary life into endless dangerous choices, and into how the Nazi regime will convince itself of a mission to subdue all of Europe.