Before We Were Trans: A New History of Gender 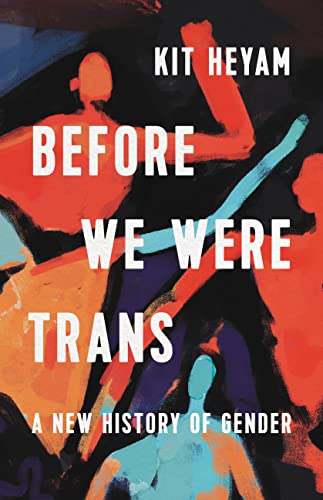 “Heyam has gone a long way to realizing their ambition to ‘open up space for so many more new ways to relate to gender . . . and to enable people of every gender to live more freely and expansively . . .  with more fluidity, situationality, ambiguity or creativity.’”

In Before We Were Trans: A New History of Gender, author Kit Heyam presents and analyzes testimony to the existence of non-binary gender ideas, roles and behavior across cultures and from different time periods, before the word trans and its variants and derivatives entered our vocabularies, roughly dated as the early 20th century. Perhaps the “trans” of the title should be in quotation marks though that would reduce the creative ambiguity of the phrase.

They were inspired to undertake this rich and complex journey, riddled with conflicts, contradictions and reverses (not to mention terminology and pronouns perhaps new to some readers), since modern trans people, including themselves, often feel isolated; the re-reading of the history of transness proves that it is not some newfangled fad with little validity, as is often maintained by anti-trans activists, of whom there is quite a range.

Heyam’s own struggles with understanding their evolving identity are woven through the chapters.

“the few piecemeal images of transness I had access to as a child were heavily medicalized, all suggesting that transness was something you did to change your body, not something you felt. I didn’t know that it was possible for trans people to be anything other than straight, for them not to conform to gender stereotypes [presumably ‘binary’ though it’s not stated] or for them not to have “always known”—in a kind of static, essentialized way—that they weren’t the gender that they were assigned at birth.”

They note that of the examples usually available the most successful performances of transness have been individuals who had completely converted to the norms of femininity or masculinity without divergence, and were predominantly white (examples given are actress, singer and recording artist, Christine Joergensen, and Roberta Cowell a race car driver). An individual’s moving away from gender assigned at birth into a non-binary position, i.e. people “who don’t identify as male or female all the time” is much less well recognized or generally accepted.

Heyam insists that transness (as gender in general?) is about who you are and not what you do. This distinction they make between identity and performance is harder to apply than would appear on first sight, as is in fact demonstrated at several points in the text. Presumably one would ideally want to express identity however transient and changeable through valid performance . . . though that would not necessarily relate to available binary stereotypes. And by the way, stereotypes do not have to be binary though they often are assumed to be.

Every substantive chapter of this interesting book is packed with relevant testimony to support Heyam’s thesis of the long-established nature of the phenomenon of transness; some will be familiar to most students of gender (e.g. Albanian “sworn virgins”; South African runner, Caster Semenya; Anne Lister aka “Gentleman Jack” now the topic of a BBC drama of that title); and some likely to be new to most readers.

Heyam distinguishes their book from other trans histories in that “invasive details about trans and intersex people’s bodies that populate many other histories” have been avoided, stating that “nobody needs to know exactly what someone’s genitals look like to understand their story”—although very often for intersex individuals, examination of their genitals is precisely where their story starts.

The modern understanding of “trans,” “transexual,” and “transgender” is traced through the early, mid, and late 20th century along with the word cis (“dating back to at least the 1990s”); cis individuals being someone comfortable with their assignment at birth, though not necessarily buying into associated stereotypes of femininity and masculinity. It should be noted that the term “cis” is not yet in general use although being the default condition in most if not all societies.

Heyam admits that though we have now have many more labels to discuss sex and gender, sex is still largely assumed to be biological and gender to be socially constructed . . . though there is not much coherence or consensus between or amongst the non-experts, the experts, or the activists as to what that means. And what is understood by “sex” is also “socially constructed.”

Heyam does some sterling work on putting life into the cliché of “socially constructed” but could have been even more forceful in exposing the narratives that hold binarism in place, and the circumstances in which binarism is regarded as a requirement, such as in autocratic, conservative, and expansionist political regimes who cannot tolerate difference, other than us versus them (and would like to have more of “us” and ideally none of “them”). Manifestations of sex, gender and sexuality are shaped (“constructed”) by political, economic, medical, population, and legal narratives, and by ideas of race, class, age, and ableism. Religion, including the Christian religion, is of course a major culprit in terms of supporting clear cut binarism, though it gets a rather easy ride here.

The strongest chapters, and those most likely to draw in the intelligent “gender amateur” are those packed with historical testimony; favorites include the wakashu of Tokugawa Japan, and the chapter on living and performing as a woman in the First World War internment camps.

The more explanatory and theoretical sections sometimes feel not fully realized, or perhaps not always made with sufficient force; and, of course, this slippery—or as Heyam says “messy”—material is not amenable to neat conclusions. The audience Heyam is addressing is also hard to pin down, as in principle it includes everyone with a gender, though the title of the publication may ensure that Heyam’s traditional sparring partners (anti-trans feminists and lesbians, some intersex people, etc.) seize on it first.

Despite these minor reservations Heyam has gone a long way to realizing their ambition to “open up space for so many more new ways to relate to gender . . . and to enable people of every gender to live more freely and expansively . . .  with more fluidity, situationality, ambiguity or creativity.” Hopefully their revelations of gradations, variety, intersections and combinations of sex, sexuality, and gender will soon lead more people to see that discrimination on these grounds is really not worth the effort, and that we should all be focusing our hostility on climate change . . . or Botox . . . or moon landings . . . or (fill in the blank).