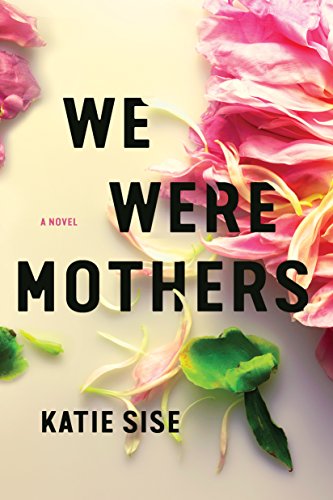 "several delicious Lifetime movies rolled into one . . . The finished product is superbly satisfying."

Okay, readers. Get out your pen and paper and prepare to make a cast of characters list to keep as a reference as you read. Unfortunately, the author did not provide one, but you might need it to keep all the characters and their relationships straight. The opening chapter and several chapters that follow introduce the reader to a lot of characters—mothers, fathers, husbands, wives, daughters, sisters, best friends, boyfriends, babysitters, and children. You'll need to know who is who in order to follow this busy-busy story that opens at a birthday bash for two-year-old twins.

Four main characters are at the center of We Were Mothers who, along with all the other people in the book, are attractive, educated and wealthy:

Cora—The party is at her house. She's still grieving her sister Maggie's death ten years before.

Sarah—Cora's mother. She, too, is still grieving Maggie's death, as well as her divorce six years ago.

Laurel—Harboring some resentment over an unfulfilled career dream, and suffering but tolerating a horrible marriage to a dastardly man. So dastardly the reader will question the validity of her reason for staying with him:

". . . And now she counted down the days until Anna left for college, because leaving him then wouldn't even draw suspicion. It was the natural time marriages dissolved. Laurel had been paying very close attention: when the houses in Ravendale became empty of children seemed to be the precise time people who had been wanting to leave picked up and left. She would be one of them."

She also wanted to "show her family she was nothing like them."

The entire book takes place over the course of a weekend though there's an epilogue that happens one year later. Story opens with Cora making goo-goo eyes at someone else's husband during the birthday party:

"Swooning over a man who wasn't her husband made Cora feel terribly guilty, but how could anyone not swoon over Jeremy? His lashes were thick and dark, his tanned skin glowed, and his built frame towered just the right number of inches over six feet. . . She should be stronger, or more in love with her own husband."

Does anyone see trouble on the horizon?

Later, when Cora goes upstairs to change her baby's diaper, she surprises Laurel's daughter Mira in the bedroom. Mira initiates an uncomfortable conversation about her sex life which gives Cora pause. After Mira leaves the room, Cora finds a notebook hidden in plain sight on the bed.

The notebook is a diary containing a scandalous secret that ultimately devastates this tight circle of friends. Before the weekend is over, Mira goes missing, but it takes nearly half the book to reach this plot point. A related questionable death also doesn't become the focus until the midpoint. There's a long lead-up.

Author Katie Sise is a successful Young Adult writer, and there is a definite twinge of YA angst and drama threaded in and out of this story line. More mature readers will prefer stronger, less "victimized" female characters, and at least some admirable men to offset the bad daddies. Still, the story unfolds like several delicious Lifetime movies rolled into one.

The author writes from various points of view in alternating chapters, which is an excellent way to show depth of character. But these chapters are so short the story seems to jump around abruptly, which may distract some readers and confuse others. The characters get shortchanged, as well.

And speaking of showing, the story could have benefited from more of it. There are long passages of internal dialogue in some chapters with a minimum of action and plot-moving conversation between characters. Which is not to say this is not a readable book. It is very readable if you take your time and read it slowly. There's a lot going on. A lot to take in.

Try this: Read this book as if you were putting together a jigsaw puzzle. Think of the opening chapters as the straight-edged outside puzzle pieces. The frame, so to speak. Then work your way in through the rest of it collecting and setting aside similar pieces before carefully fitting them together. Don't rush it. The finished product is superbly satisfying, and you'll surely look forward to this author's next domestic suspense.