We Share the Same Sky: A Memoir of Memory & Migration 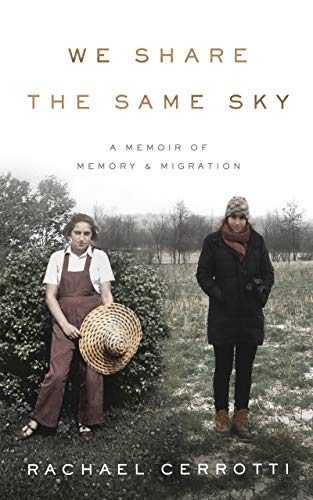 “Bearing witness has never been more important. Cerotti and her grandmother are powerful guides as to why these Holocaust stories matter.”

As the generation of Holocaust survivors dies, their grandchildren are picking up the banner to tell their stories. As a college student, Rachael Cerrotti starts interviewing her grandmother Hana about her journey from Czechoslovakia to Denmark to Sweden to the United States. Hana dies not long after the first of their in-depth conversations, but she leaves behind a wealth of material that Rachael uses to create a profound sense of family history. Following her grandmother’s trail, she meets with people who knew her—some who saved her—as she fled the Nazis alone as a 14-year-old girl.

Cerrotti offers her own personal story, her growing sense of connection to a difficult history, as a frame for Hana’s life. She learns from her grandmother’s resilience and is guided by her spirit when she needs it most. But the meat of the book is Hana’s story. Like so many assimilated Jews, her family was sure they were safe in Prague:

“Each of the previous generations in her family had faced anti-Semitic rhetoric, sometimes being called ‘dirty Jews’ or spat at, but it never went any further, at least not in Hana’s memory. She was simply taught not to make waves about her Judaism—to not fight back—and for the most part, she never felt like she had to.”

After the Germans invaded Czechoslovakia, this changed for the Jews. Schools closed, bank accounts were frozen, groceries were rationed, professions restricted.

“‘I remember my parents wanted to immigrate to Uganda,’ my grandmother reflected. It was one of the coungries proposed by the Zionist movement as a possible home for the Jews. . . . Hana’s father dutifully filed and refiled all the necessary paperwork as fast as possible. . . .

But the doors were closing. The Germans wouldn’t let the Jews leave and even if they did, nobody would let them in. Hana told her granddaughter:

“‘It’s not true, like they say, that the Jews marched to the concentration camps like sheep to the slaughter. People wanted to get out of the country but nobody, including the Americans wanted them. You needed exit permits and entrance permits, but nobody wanted the people.’”

Hana survived because the Zionist youth movement she belonged to made an agreement with Denmark to take young Jews who were heading for British-ruled Palestine. There they would wait for the paperwork necessary for the British to allow them into the Protectorate. Denmark, of all the countries in Europe, did the most to protect its Jewish population, saving 95 percent. This was because of ordinary people helping their neighbors, not just the official stance of the government.

“Hana didn’t know anything about the raid against the Jews until a member of the Danish resistance showed up . . . in little more than three weeks, more than seven thousand people . . . illegally sailed across the Baltic Sea to Sweden, whose government offered immediate and unconditional sanctuary for all those fleeing Denmark.”

Hana was on one of these small fishing boats, and Cerotti follows the path her grandmother took, first visiting the Danish family who housed her, then tracking down fellow Jews who shared the boat passage. Cerotti is doggedly determined to meet anyone still living who her grandmother mentioned in her pages and pages of journals and letters. Talking with them gives Cerotti not only an expanded sense of her grandmother’s character, but a larger context for her journey. As one fellow refugee says of the immediate post-war period:

“‘All of those people who survived the camps—they were stateless and homeless . . . But nobody wanted them.’” There were upwards of 250,000 Jews living in displaced-persons camps around Europe.

Where could these survivors go? Hana’s entire family—her parents and younger brother—had been murdered. There were no grandparents left, no uncles or aunts. Nothing and nobody welcomed her

back to Prague. As a young Zionist, the obvious choice was the newly established state of Israel, a country created by England to solve the Jewish problem by sending the refugees there. But to get there, refugees first had to go to a clearance center in Cyprus. The idea of staying in yet another internment camp was too much for Hana. Fortunately the United States had just passed the Displaced Persons Act.

After limiting immigration to fewer than two hundred thousand a year in order to protect America’s “racial stock,” the country was finally willing to allow 400,000 people displaced by war entry into the country. About 80,000 of those visas went to Jewish refugees, still a tiny number  given the depth of the need. Hana’s grandmother had a stepsister living in Ohio. That slender link was all Hana needed to flee for yet another country and learn yet another language, her sixth.

Again, Cerotti follows the steps her grandmother took, appreciating her courage in facing the unknown, alone and unmoored. The Ohio family proved less than welcoming, and Hana, now a young woman in her 20s, headed for San Francisco, taking trains across the entire country, first from New York to Cincinnati, then Ohio to California.

Every survivor’s story is compelling in its own way. Every one is worth hearing. Cerotti gives her grandmother’s the resonance it deserves, and it has even more power reading about it now as new waves of refugees fight against restrictive immigration policies and as anti-Semitism is once more in the daily news. As Cerotti notes in a letter she writes to her dead grandmother at the end of retracing her steps:

“Anti-Semitism is on the rise. I imagine that much of the rhetoric you overheard as your father listened to the radio in 1938 would feel uncomfortably familiar today. I think it will always exist—anti-Semitism. We are a minority, and the hate and fear people have is so deeply rooted in both religion and history that it will likely never go away, even with all the good intentions of others and the protection that Israel offers. I often think back to what you told me of your parents’ attitude about Judaism. ‘Don’t make waves,’ they said. It seems to me that might be the safest approach.”

Cerotti doesn’t end the book on this sad note, but on a hopeful one, one that connects her deeply to her family history in a good way:

“Back when we were talking and you heard the end of your story, you said to me, ‘Rachael, the big difference between your travels and mine is that I had to burn all my bridges as I moved forward.’ Mutti, I want you to know that that wasn’t true. The bridges weren’t burned. They just needed a couple of generations before they could be crossed.’”

Readers should be grateful that Cerotti crossed those bridges and takes us along on this journey. She shows us how individuals can make big differences in the lives of others and how important it is to know our histories. Bearing witness has never been more important. Cerotti and her grandmother are powerful guides as to why these Holocaust stories matter.