We Love You, Charlie Freeman: A Novel 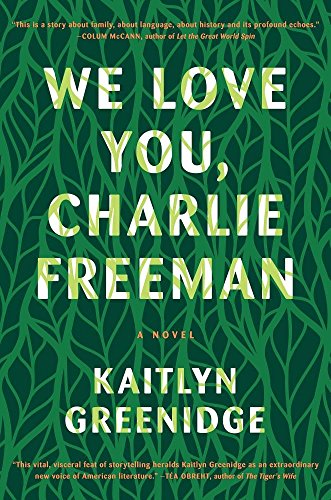 Kaitlyn Greenidge’s debut about family, race, and eugenics is a haunting coming-of-age novel. It’s a significant and timely work that delves into humanity and the exploration and dark underbelly of the Toneybee Institute’s dark 1920s secret experiments.

Lonely, living in apathy and feeling a division from her rural all-white northern town, a young 1950s African American girl, Laurel Freeman, withdraws and chooses to become a mute. Soon she finds solace and perfection and warmth in sign language, instead of the cold silent indifference in the rest of her life.

Laurel goes off to college in the 70s and learns to teach sign language, but discovers to sign not just in white, but black with its own theatrical beauty and drawl.

The author writes of Laurel, “They only had to see black sign language . . . to understand it was special.” Greenidge never really elaborates on the difference, nor shows the detail of black signing, and readers will find themselves intrigued and wanting to learn more.

For Laurel, having the special black signing skills becomes her love and passion, and she yearns to share it with the world. But the world does not agree and politely shuns her for stubbornly refusing to sign only in white. Laurel is denied promotions and is stuck as a lowly assistant in a school for the deaf.

Laurel marries and has two children whom she teaches to sign.

In early 1990s, after years as an assistant teacher, Laurel spies an ad on the bulletin board in the teachers’ lounge for a sign teaching position at a private intuition hours away. One of the job duties is to teach sign language to an abandoned chimpanzee, Charlie.

Toneybee is privately funded and owned by aging heiress, Julia Toneybee-Leroy. Toneybee has a strange fondness for chimpanzees and has dedicated her life to the study of these animals.

Despite the Freeman family’s bad luck with animals (all their pets die), Laurel snatches up the ad to keep anyone else from applying and charms her way into the position, jumping at the opportunity to become part of the experiment the private research facility proposes.

Soon Laurel uproots her less than willing-to-move husband and two daughters from noisy Boston and they move to the bucolic countryside, living inside the Toneybee Institute’s apartment with the chimpanzee.

“Laurel never doubted that she loved Charlie. She loved him before she met him. But it wasn’t love that made her insist upon the innocence and beauty of Charlie and the experiment. It was her complete and utter at exhaustion at being underestimated.”

Laurel devotes all her time and energies to working with chimpanzee Charlie but ignoring her family. She is determined to make him part of their family, give her daughters a brother, and teach the chimpanzee sign language.

Laurel signs in white when other workers are around during the day, but at night, alone in her quarters, she signs in black with Charlie. She tries to enlist her daughters’ help, but they are more interested in fitting in in their uncomfortable new roles and schools.

Laurel’s older daughter, Charlotte, a high school freshman, makes friends with one of the very few black classmates in a mostly predominately white school, and slowly unravels the institute’s true agenda and past history and her mother’s shocking secret. Younger sister Callie withdraws and pines for the attention of her family and painfully tries to gain her family’s attention and win over her new chimpanzee brother, Charlie.

Interspersed are the chapters from Nymphadora of Courtland County, 1929, the painful and somber story of Nymphadora, a girl whose parents commit suicide. Before her parents died, Nymphadora was raised to be a Star of the Morning in the secret and religious society that teaches “other Negro women how to shine” and instills goodness in Christian Negro women.

Nymphadora’s mother, a leader Star herself, tells her only daughter the importance of the society and her role. “Because in order for the Negro race to survive and thrive, we need a hundred stars, a thousand stars, full of light to show others the way.”

But with no family, loneliness and meanness eat at the adult-orphaned Nymphadora until one day a researcher from the Toneybee Institute approaches her. Nymphadora’s life takes another downward spiral as she discovers the stark and bitter truths behind the institute’s experiments.

A smart mesmerizing tale with finely crafted dialogue and landscape, We Love You, Charlie Freeman is easy to fall in love with.