We Know You Remember (The High Coast Series, 1) 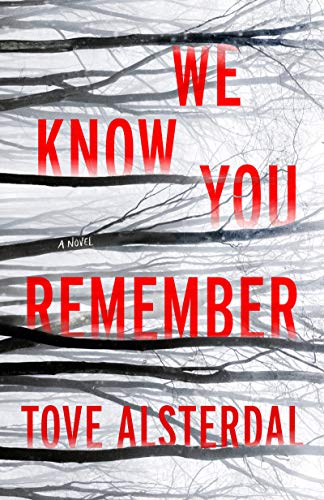 “Among today’s abundant crime novels, it’s rare to find one that demands a second reading for its language and insight. We Know You Remember is one of that small group.”

Even before investigators suspect that he’s a victim, not a perpetrator, Olof Hagström’s presence in his long-ago hometown in rural Sweden is drenched in sorrow, terror, and accusations. Living on the fringes of society, supporting himself through an off-the-books job, and isolated by both his slow speech and his burdensome past, he yields to an impulse to visit his childhood home—where he finds his father dead in the bathtub.

Police detective Eira Sjödin hasn’t been around town much either, but the case calls her into a community that hasn’t forgiven or forgotten Olof. At age 14, he’d been the local scapegoat: convicted of rape and murder of another teen. His own mother wanted nothing more to do with him.

But Eira is going through her own changes of identity, as the investigator who’d mentored her enters retirement. A woman on a police force, including in Sweden, needs to watch her back as often among her colleagues as on the street. Suggestions from her mentor send her back to the case 20 years earlier where Olof was charged. “GG hasn’t exactly been explicit about what he wanted her to do, but his hints were more than enough. An unwillingness to listen. A suspicion that she was digging into Olof Hagström’s past because she felt guilty.”

Eira’d been only nine years old when Olof was charged. Why should she feel guilty now? It has something to do with how she’d first seen the man in the interrogation room, sweating and frightened and incompetent. “It wasn’t just unease, it was stronger than that. It was disgust and contempt and a kind of curiosity that made her stray beyond the strictly professional.”

But opening up Olof’s past means reopening her own, and Eira’s family life growing up was far from simple. Those teen rebellion years included risks and secrets. If her investigation moves suspicion onto people she cares about, will the cost be too high? And what about her own mother, sliding into dementia—when she asks her mother to open up about the past, it’s only Eira’s anger at the old silence that keeps her pushing. “Whether you do or don’t remember, she thought, there’s something you’re trying to protect me from.”

The pipeline for translation of Scandinavian noir demands time. Alsterdal’s 2009 debut in Sweden won her immediate acclaim, and she’s brought out more stand-alone novels.   We Know You Remember came out last year in Sweden, under a title that translates as “Uprooted.” This translation by Alice Menzies reads well, letting Alsterdal’s steady accumulation of haunting and guilt-drenched detail build a memorable internal world. The power of this crime novel is as much in the struggles of Eira’s too-personal investigation as it is in the criminal threats involved. Eira is a victim of her own inescapable compassion, as well as of the demands for clarity that come with her investigation.

Among today’s abundant crime novels, it’s rare to find one that demands a second reading for its language and insight. We Know You Remember is one of that small group, and more American appearances of Tove Alsterdal’s other titles are well worth looking forward to.