We Keep the Dead Close: A Murder at Harvard and a Half Century of Silence 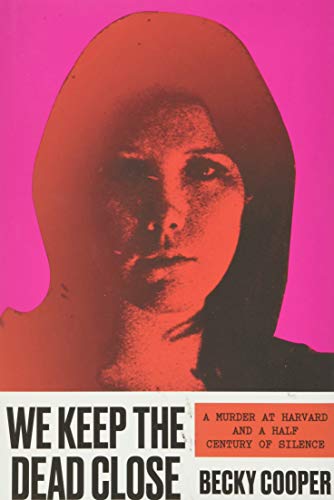 This is not your typical true crime book, and that’s very much a good thing. At the same time, it’s a caution to readers who pick it up expecting a run-of-the-mill true crime. This is not that, but it is a stunning achievement—a whodunit page turner with an unexpected ending that is both shocking and, sadly, a little disappointing.

But no spoilers here. To discover who exactly killed Jane Britton, a 23-year-old graduate student at Harvard University or, perhaps more accurately, who the authorities say killed Jane Britton back in 1969, you’ll have to read to the end of the story. It’s worth it.

This was one of the best books of 2020. Author Becky Cooper’s quest to learn the truth about Jane Britton’s 50-year-old unsolved murder is a fascinating journey that ultimately leads to any number of truths about murder, relationships, justice, misogyny and powerful institutions.

To begin, it’s surprising that Jane Britton’s murder was unsolved for so long. She was white, went to Harvard (or Radcliffe in those days), lived just off campus in university owned housing, and her father was a senior administrator at the university. Surely there was pressure on the police to find her killer.

Given the bare bones outline of the story, it’s not surprising that the tabloid reporters came running; even New York City newspapers had Jane’s murder on the front page. Jane was an outspoken, outgoing anthropology student whose murder had earmarks of a ritual killing. Red ochre was sprinkled around her body, a substance used for burials rituals in various cultures.

That fact alone made it seem as though someone associated with Harvard’s anthropology department had committed the murder, and there were long whispered rumors that Jane had been having an affair with a professor who was about to get tenure. If his affair with Jane became known, his tenure would be lost. Did someone say motive?

Enter author Becky Cooper, herself a student at Harvard when she first hears the rumors about the murder casually. Jane Britton’s murder is something of an oft-told cautionary tale passed down from student to student about what happens to co-eds who sleep with their professors. What’s more, the rumor mongers tell Cooper, Jane’s alleged killer is still a respected professor—with tenure—in the Harvard anthropology department. How can this be? Cooper wonders.

Cooper graduates and stores the story away but cannot shake it. A year or so later, by then a researcher at The New Yorker, Cooper gets the investigative reporting bug, quits her job, and resolves to uncover Jane’s murderer. It’s a story inside a story, not just of an unsolved murder but of a reporter’s determination to find the truth.

But how to begin? Because Cooper is not an actual investigative reporter, she is daunted by the prospect of talking to sources, taking days to work up the courage to call Jane’s friends, and going down paths that lead nowhere.

How does one talk to the police and the district attorney? How can she, who has no standing in journalism circles, get them to cooperate? Will Jane’s friends and acquaintances even want to revisit her murder?

Cooper makes a breakthrough when one of Jane’s close friends agrees to talk. This friend, Elisabeth, brings Jane to life: “[She was] a kick in the pants. She was sort of like a combination of Groucho Marx and Dorothy Parker, just without the mustache.”

And just like that, Cooper is off and running with one friend leading to another and then another. As many a reporter has learned, persistence pays off. When friends and relatives of a victim understand that you care about the murder victim nearly as much as they do, doors open.

Cooper’s initial naïveté is one of the charms of the book. We see her tackling her own self-confidence in real time, and we take the journey with her as she becomes more of a seasoned reporter and researcher.

Along the way, any number of Jane’s friends seem like they may have had something to do with her death. One of the most fascinating threads involves a fellow student who had a crush on Jane. This same fellow later accompanies a different female researcher, Anne Abraham, to Labrador where Abraham mysteriously disappears. It seems too much of a coincidence and, as Cooper discovers, she’s not the only one who thinks that. Two other women, not associated with each other, have studied this suspect for years, trying to understand why he was with or nearby Jane Britton and Anne Abraham when they died.

But that’s only one of many roads Cooper travels down. Aside from the potential murder suspects, Cooper delves into the misogyny faced by many brilliant women at Harvard back in the day and the way the patriarchy affected their lives and careers.

By the end of the book, Cooper does learn the identity of Jane Britton’s killer. She’s not sure she entirely believes it, but the police do, and the district attorney closes the case. That revelation takes us down yet another sociological road into the way the criminal justice system operated back in the 1960s and ’70s. It’s one more lesson for Cooper in a book full of them. Luckily for the reader, we get to go along for the ride.