We Have a Pie 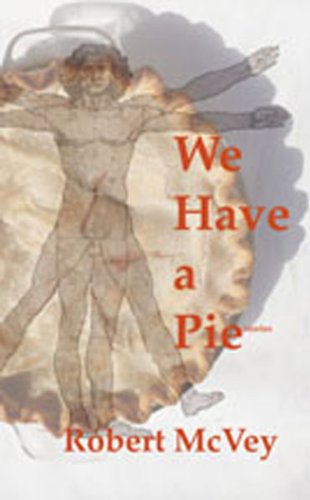 Will Rogers once famously commented: If you don’t like the weather in his home state of Oklahoma, all you had to do was wait a moment.

The same philosophy holds for the short stories (or more accurately the short-short stories) of Robert McVey in We Have a Pie.

Weighing in at a page and a quarter to a page and a half, each or micro narrative (We get eighty of them in this single collection!) takes only a moment to read.

And so if you don’t like “Criminal” just hurry on to “Beeped,” which you will likely like much much better.

Or you might hate “Beeped,” but never mind. Just read “Exeunt” or “Plums” or “The Gang’s All Here.”

The stories captured in We Have a Pie and held somewhat under pressure within the covers of the book are so varied—some with the sort of twist ending that made “The Twilight Zone” both so popular at the time and so campy now in retrospect (the little men aren’t aliens, Agnes Moorehead is the alien! or the Earth is not burning up, it’s freezing but Lois Nettleton has a fever so to her its burning up!). Others offer little shards of insight into human nature or fragments of sense memory as if the reader were taking a class in the Stanislavsky Method.

The trouble is given their length and the lack of in-depth character development, a story arc, and the like dictated by flash fiction, the stories end up being Christmas sweaters of a sort with very truncated usefulness and somewhat limited appeal. Think fiction presented in a greeting card format.

Which is not to say that quality is lacking. Mr. McVey, a Manhattan psychiatrist (who apparently is too busy to “write long”), is a wordsmith, plain and simple. And several of the pieces contained in the collection would make for excellent dramatic monologues.

Take this from “Three Thin People:”

“It’s the first warm day of the year. Every year they get only fatter. I’m supposed to look at this suet parade as if it’s normal, as if it’s the very best we could come up with. It isn’t, and I’m not so desperately exhausted that I cannot summon up the misanthropy the twenty-first century requires.”

Or the wonderful set up to the story “Girls About Town:”

“On Gay Pride Day, I went to the revival house and saw Girls About Town, 1931, directed by George Cukor, a homosexual. It was a film I didn’t think I’d ever get to see, but it materialized for one day only, thirty-five years into my waiting for it, even as love—you know, someone to love and desire me—never had materialized and never would.”

“I was having my morning coffee with CNN, and my eye landed on the moving crawl at the bottom of the screen and the word ‘Wynonna.’ No, Wynonna is a woman I think of as always trying to get it together and self-realize. I’ve seen her on Larry King from year to year. Her silken voice celebrates life in all of its evolving wondrousness, yet she has known pain. She is of us who have sought solace in a Twinkie. And found it. Again and again. And paid the endless Shameful Price.”

Or this rather indelible moment (and let’s face it, with stories this short a moment like this is like a chapter in other books) from “Beeped:”

“I go look at puppies in the pet shop window ten blocks away. A miniature schnauzer with the head of a frowning Beethoven captures the attention of a toddler inside, who flings himself upon the window. Their eyes meet in a moment of communication, and I hope each of their brains get a deeper smiley wrinkle from it.”

It would be easy to continue stringing these little pearls for quite some time as each minute tale offers up a gem or two like those quoted. Each is rather a perfect bite, a lovely amuse bouche; however, how many bites does a meal make? And given that one story is sweet, the next salty, the next downright revolting, a meal of these is peaches and spicy mustard and circus cookies—all mixed up and touching each other on the plate.

Nonetheless, the collection does represent if not a full smorgasbord at least a lovely little graze of sorts. Dip in here and there ignoring the printed order of the collection, and a good time may be had.

Among the leitmotifs that one trips on again and again are vomiting and/or belching, being fat, being gay or perceived as acting as if you are gay when you may or may not be, the arts (writing primarily, but also dance and photography, and cinema) and death—lots and lots of death, many sad, some horrid, nearly all lonely.

So much is crammed in the pages of this brief collection. And so much of it is so very rich the reader begins by “Part Four: 41–50” to understand that the stories contained here are no so much unfinished as they are distilled. Were they allowed to swell, allowing for backstories and foreshadowing and such, this material would have represented the work of several lifetimes. Thus Mr. McVey only does what he must in condensing what otherwise would have used up so much paper.

There is one story that stands above the rest: “The Meaning of Bennett Cerf.” Suffice to say it is written as a response to watching the Game Show Network in the middle of the night. It is the only story I’ve ever read that uses both the word oleaginous and cocksucker in one place. And along with several other tales in a collection that reads like one of Robin Williams’ more erratic stand up performances, “The Meaning of Bennett Cerf” is completely sublime.