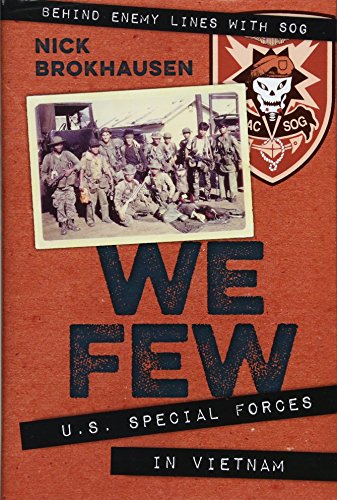 Nick Brokhausen spent the 1960s and early 1970s on the sharpest edge of the spear. Back in those days, the Minnesota native was a member of the U.S. Special Forces. More specifically, he served as a member of Recon (as in “reconnaissance” ) Force for Military Assistance Command, Vietnam, better known by the acronym MACV-SOG.

Underneath the famous green beret, Brokahusen and his friends saw intense action against the North Vietnamese Army (NVA) in the DMZ (demilitarized zone divided North and South Vietnam), across the border in the communist heartland, and in the neighboring countries of Laos and Cambodia. Such combat often proved fatal, and most of the battle scenes recounted in We Few involve dead bodies being airlifted out of the battle area following an intense firefight.

In case you are not aware, the U.S. created MACV-SOG as a deep penetration force that would take small bands of local Viet fighters into enemy territory with a handful of American NCOs. The operators were almost always outgunned and outmanned by the NVA, and yet they typically inflicted serious damage on Hanoi’s war effort. This was what Brokhausen’s war looked like.

Surprisingly, much of We Few has nothing to do with battle. For this bulk of this memoir, Brohausen recounts the exploits that he and his Special Forces mates got up to while they waited around for their next mission. Most of the violence and hijinks in We Few come during in-country R and R.

We Few recounts the year 1970. Brokhausen and his friend Bernie, a hard-luck Irishman and Korean War vet, get orders to MACV-SOG’s northern headquarters. Here, the pair join a Recon force tasked with taking Montagnard tribesmen into NVA-controlled bush. The Montagnards are tough mountain people who eat fresh game when they can, and who politely steal money and equipment from their American advisors.

Brokhausen is also quite frank about who he does not like: stuck-up “Donut Dollies” (a term for civilian nurses), careerist officers, REMFs (rear-echelon . . . just can guess the rest), junkies, and “McNamara’s 100,000.”  The latter term comes from Defense Secretary Robert McNamara’s 1966 plan to draft more civilians into the U.S. military by lowering IQ and physical fitness standards.

According to Brokhausen, these undesirable conscripts make up the bulk of Da Nang’s deserters, most of whom are hopelessly addicted to cheap heroin. Other members of the 100,000 are the ones guilty of “fragging” their officers. Four black conscripts even try to kill Brokhausen and his friends one night in Da Nang out of pure racial hatred.

We Few pulls no punches. This book endlessly recounts the wanton thievery that Special Forces men routinely engaged in, their predilection for random acts of violence, and their many dust-ups with REMF authority. Brokhausen is as hard-boiled as they come, but this book is also replete with plenty of humor, even if it is obsidian black.

For example, Brokhausen feels no shame in the fact that he sometimes walked around the jungles of Vietnam in a German helmet from World War II, or that he and his men stenciled the crest of Field Marshal Rommel’s Afrika Korps on the body of a truck that had they had stolen from a fat, cowardly major in the South Vietnamese Army (ARVN).

We Few is an excellent and exceptionally raw look at the Vietnam War just at the apex of its unpopularity. While Brokhausen and his friends were bringing the fight to the enemy and having to deal with black power militants in army green back in Da Nang, millions of Americans were marching back home in order to end the war. Some of this certainly feeds into the cynicism and anger that populates this book.

There also moments of true beauty, such as Brokhausen’s passages about the South China Sea or the coastal cities of South Vietnam. And in the final chapter, Gin and Heartbreak, Brokhausen deftly shows how living in a war zone cheapens life. Here, a pair of beautiful Australian nurses and six others get chewed up by a random Viet Cong bomb that detonates at a street side cafe. In Vietnam in 1970, survival is the only thing that matters; love and lust are fleeting. We Few shows that again and again, and this battle-scarred memoir is an excellent tribute to the generation that fought, laughed, and died in Southeast Asia.