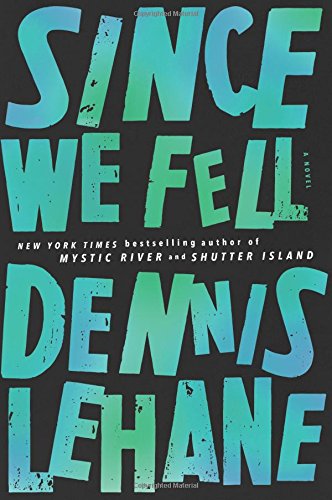 Disgraced journalist Rachel Childs, who suffered a mental breakdown on the air while covering tragic events in Haiti, now lives as a virtual recluse. Her second marriage, however, seems to be working out, and she’s slowly moving toward a recovery from her agoraphobia when something happens to break the spell. Crashing down into an unsuspected world of deception, violence, and conspiracy, Rachel must find the strength within herself to overcome her fears and uncover the truth behind the web of lies in which she has been living.

Dennis Lehane is the author of 11 previous novels including Gone, Baby, Gone, Mystic River, and the remarkable Shutter Island. His novels lend themselves easily to the big screen, and film adaptations have been directed by Ben Affleck, Clint Eastwood, and Martin Scorsese. He’s obviously not afraid of large-scale projects, and his stories have a quality that tends to lift them out of such categories as thriller, crime fiction, or suspense into more ambitious literary realms.

As a result of Lehane’s desire to write a story with a broader thematic impact, Since We Fell, presents itself as a tale of two halves.

The first half, comprising almost 200 pages, consists of a detailed character study of Rachel Childs. We learn about her difficult relationship with her mother, an unbalanced author with a single bestseller to her credit, and her endless search for her father, whom she never knew.

We follow her career in journalism and witness her catastrophic coverage of two separate calamities in Haiti that deeply affected her mental stability.

We endure her first marriage, to her television producer, and look forward in anticipation to her developing relationship with the man who will become her second husband. Lehane takes his time unpacking Rachel’s character, and once we reach the mid-point of the novel we empathize with her emotional struggles to overcome her past.

The second half of the novel is nothing short of an avalanche. While taking small steps back outside, she sees something she simply cannot believe. It becomes a thread she cannot resist tugging at until it completely unravels and sends her over the edge into nonstop mayhem. Rachel crashes through façade after façade until she finally understands the full import of what has been going on around her without her knowledge or permission.

For better or for worse, Lehane’s preferred technique for suspense in Since We Fell is the kind in which he tells us what’s going to happen right up front, then makes us wait a few hundred pages for it to actually happen in the story. It’s the very first thing we read, right there on page one:

“On a Tuesday in May, in her thirty-seventh year, Rachel shot her husband dead. He stumbled backward with an odd look of confirmation on his face, as if some part of him had always known she’d do it.”

Lehane’s decision to follow this bald and shocking opening pronouncement with 200 pages of slowly-developing character study is a calculated risk, to say the least. Since there are two husbands in play, we’re not sure which one she’ll end up shooting, and it’s a testament to Lehane’s skill as a writer that the reader resists the temptation to give up in exhaustion and toss the book aside before finding out which one gets it, and why.

In addition, while the action that propels the reader through the second half of the novel is little short of jet-propelled, one can’t help but feeling that we’ve suddenly moved outside her character, outside her complicated point of view, and are now simply watching the movie of her adventures.

Other than the predictable complications caused by her agoraphobia, her responses to the terrible things suddenly destroying her life seem almost completely reactionary, drawing little on the subtleties of character Lehane spent so much time developing in the first half of the novel. It’s as though he spent 200 pages winding her up, and then just let her go.

Nonetheless, Since We Fell is a ride you won’t want to miss. Rachel Childs is a character you’ll empathize with and care about, and you’ll want to stick around to discover how it all turns out.