We Do!: American Leaders Who Believe in Marriage Equality 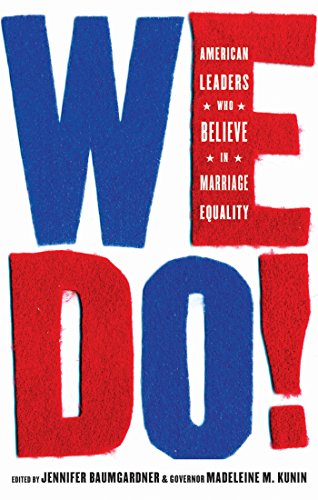 This year, 2013, is turning into the year of marriage equality for lesbian and gay couples in the United States.

On June 26, 2013, the United States Supreme Court issued its decisions in United States v. Windsor and Hollingsworth v. Perry. The former declared portions of the infamous Defense of Marriage Act (DOMA) unconstitutional and the latter restored marriage equality in California.

Baumgardner and Kunin have compiled the writings and public pronouncements of public officials and other figures on the issue of marriage equality.

Some of those represented in this book, like Evan Wolfson, have been slogging along promoting marriage equality for many years. Others like Hilary Clinton are recent converts. All of the contributors, however, hold the same opinion expressed by Andrew Sullivan, “Gay marriage . . . allows for recognition of gay relationships, while casting no aspersions on traditional marriage . . . [i]t harnesses to an already established social convention the yearnings for stability and acceptance among a fast-maturing gay community.” There it is, in a nutshell. Nothing fancy, just a clear and simply stated sentiment.

At least one of the contributors, former president Bill Clinton has come a long way. After all, he is the man who signed “Don’t Ask, Don’t Tell” and the Defense of Marriage Act into law. Frankly, he has a lot to make up for.

Granted, when he signed those pieces of legislation it was a different time. Yet that is what people expect of leaders: to make the difficult decisions during difficult times. President Clinton’s March 2013 Washington Post op-ed column reflects his decision to hop onto the bandwagon. Welcome aboard, Bill. It’s about time.

Still, Clinton is not unlike most politicians: finger always checking the way of the wind. The speeches and writings of heterosexual politicians are not as poignant as those of lesbian and gay men and women who faced the furor of those who were frightened and incensed with the thought that LGBT people might have the right to full citizenship.

In 2000, Vermont became the first state to give legal recognition to lesbian and gay relationships by creating civil unions through the legislative process. Bill Lippert was the lone gay member of the Vermont legislature. On the floor of the Vermont House of Representatives, Lippert gave voice to the personal struggle in the effort for equality.

When the Vermont legislature took up the civil union legislation in March 2000, Lippert rose to the occasion. “Think what kind of relationship you would try to establish and how successful it would be to find a loving, committed partner in an environment where you have been barraged on a daily basis, from birth, saying you are sinful or wrong, that something is fundamentally flawed in your nature. It is, in truth, the goodness of gay and lesbian people and of gay and lesbian couples that is a triumph, is a triumph, against discrimination and prejudice. We are not a threat. We are not a threat to traditional marriage. We’re not a thread to your communities. We are, in fact, an asset. We deserve to be welcomed, because in fact we are your neighbors; we are your friends; indeed, we are your family.”

Lippert’s extemporaneous speech is the most touching part of this book. He spoke from the heart.

This book will serve as a resource for what was said about the struggle for marriage equality . . . at least what was said by men. And,therein lies a major deficiency of this book.

Where are the women? Sixteen people are represented in its pages but only four women. And, only two of those are lesbians. Too often lesbians are overlooked, ignored, or forgotten when discussing the history of the LGBT civil rights movement.

Where is Mary Bonauto? Or Camilla Taylor? What about Jennie Pizer? These women are but a few of those who have been pressing forward for years in the fight for marriage equality.

This book has a place in reporting on that history but it will be less important because of the lack of women’s voices in its pages. It’s too bad that Baumgardner and Kunin, professed feminists, failed to notice those missing voices.