We Are Not One: A History of America’s Fight Over Israel 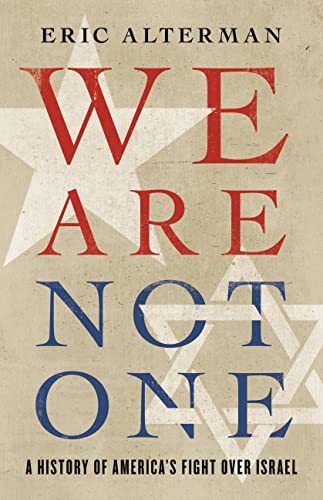 “This work is an education and a powerful discussion that spurs needed honest conversation.”

We Are Not One is an appropriate title for this book and on different levels. “The space that Israel occupies in US political debates is, by any measure, extraordinary,” writes Eric Alterman in the first line of the book. That “support takes countless forms,” including opinion polls and the foreign aid “literally unparalleled . . . in the history of any nation.” Help for the Jewish state also includes vetoes and votes in the United Nations as well as almost completely unregulated military aid. Has America, however, made itself culpable in apartheid and other crimes of the governments of Israel?

Public support for Israel, until recently, included almost all Americans without regard to religion or political party. Not all of the people of the United States, not even Jewish people, have ever spoken with one voice over Palestine and Zionist ambitions, however.

The roots of this seeming contradiction began in the Old World. “People all over the world have marveled at the imagined mystical power of the Jews over societies” but at the same time “Jews judged their condition to be one of endless episodes of political impotence and vulnerability.” Americans falsely blamed the nation’s Jews for much of the wrongs of big business but extended great sympathy for these people after the multi-million murders of the Holocaust.

This almost universal support for Israel lasted until 1967 but seriously began to unravel in the 1980s with critics, especially in the Jewish community, came to question the conservatism of the Israeli government and its treatment of Palestinians. Israel’s interference in American politics has become hotly debated.

The modern Zionist state began with large migrations of very different groups of Russian Jews fleeing to Palestine to escape the anti-Semitic pogroms and other horrors of Tsarist Russia. This same humanitarian crisis brought on an equally great eastern European/Russian migration to the United States that overwhelmed the relatively small numbers of German Jewish families that had settled in America earlier.

The Christian evangelical movement in the United States that called for a restoration of a Jewish state in Palestine already existed by that time but, as with the small number of Jews, went largely ignored. The Holocaust won Zionism and a degree of unity for Christians and for Jews as the survivors who sought to build new lives in Palestine became heroes in the popular American mind.

The American Jewish community now “had a purpose and a common cause,” but not everyone in the United States completely agreed with all things associated with Zionism. Even some Jews would “question the morality of Jewish terrorists.” Some Jewish leaders feared that Zionism could inflame new anti-Semitism.

A call had already begun for the new state to have equal rights for all of its people including Christians and Muslims. The influx of Russian Jews had overwhelmed the earlier German Jewish communities until a 1924 act limited that immigration—but how would that affect Palestine?

President Harry Truman’s almost immediate recognition of the government of the state of Israel in 1948 “was the culmination of one of the most successful and ambitious lobbying political campaigns in political history.” The same lobbying and prejudice continue to the present.

Despite forming “deep relationships, both personal and professional, with Jews,” Truman had prejudices against Jewish stereotypes common to his time (as did President Nixon). The United States national security establishment “demonstrated a rare unanimity and consistency when it came to Zionism: they were opposed.” Supporting Jewish immigration to Israel seriously threatened American relations with the Arab nations. Winning Jewish votes played a major role in Truman’s recognition of Israel.

The new Jewish state never developed into the “normal” country that American liberals had hoped. Its image drew upon wildly biased propaganda that portrayed it as an oasis of modern democracy in a sea of Arab barbarity. Support by and the few immigrants from American Jewry proved a disappointment to Israel’s supporters, however. It has gone through many phases including the question of if to oppose Zionism is to be anti-Semitic.

The new nation needed financial help but what did come from the United States was “understood by both sides to have come from a place not only of generosity but also of guilt” from not saving more Jews from the genocide in Europe. Israel’s socialism did not set well with many people in an America increasingly paranoid over Communism. Israel from its beginnings ignored American pleas for the repatriation of 750,000 or more Arab refugees.

Eric Alterman writes clear, concise chapters on subjects befitting whole books, such as the origins of modern Zionism and the debate on recognizing Israel. Other topics discussed include the Suez Canal Crisis, the movie version of Leon Uris’ novel Exodus (edited upon suggestions by the Israeli government), the United Nations, and much more. The author even discusses the recent death of Palestinian-American journalist Shireen Abu Akleh.

Each of the chapters on the United States presidents, especially Nixon, Carter, and Clinton, is so separate from the others, representing the changing views in the United States and Israel among Christians and Jews. It always had more dimensions than the American general public would appreciate. Personalities, politics, and prejudice abound.

Israel’s Six Day War (1967) on its neighbors became a great turning point in the relationship between the United States and the Jewish nation in Israel. The subsequent treatment of the native Palestinian people in Jerusalem and elsewhere moved America’s left against Israel even as the Christian evangelicals increasingly embraced Zionism. American Jewry initially tried to continue writing checks without considering questions about the justice of Israeli policies regarding even the harsh treatment of Israel’s Arab citizens. Dissent within Israel, however, grew.

We Are Not One is balanced and fair, but Alterman holds little back in expressing his views with the hard realities. This work is an education and a powerful discussion that spurs needed honest conversation. This work is annotated.