We are Explorers: Extraordinary Women Who Discovered the World 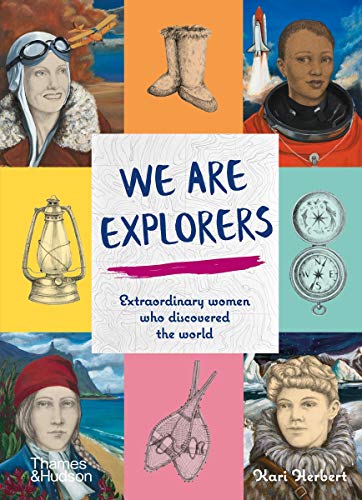 Kari Herbert offers a compilation of women explorers from one studying plants in the 17th century to one climbing Everest in the 20th. It’s an admirable goal but one marred by historical inaccuracies. Parents and teachers rely on books like this to get the basic facts right. The first discoverer described, Maria Sybilla Merian, a 17th century German naturalist and scientific illustrator, is called so “fiercely independent” she “decided to divorce her husband and move to Amsterdam.” That sentence raised alarm bells. A woman in the 1600s able to divorce her husband? How? Women were basically men’s property for many centuries, most of recorded history actually. And the author gives a modern cast to what was obviously an unhappy marriage. A little research confirmed the suspicion that it was in fact the husband who divorced Maria. Once such a basic mistake is revealed, it is hard to trust the other claims in the book.

What the book does well is introduce young readers to women who broke the strictures of their times to do extraordinary things. The inclusion of illustrations by these women, those who were scientific artists like Maria, as well as contemporary photographs, enriches the text. There’s a broad range of women from different countries, eras, and backgrounds, something showcased on a map in the endmatter.

What the book falls short on is placing these women’s achievements in historical context. Little mention is made of the hurdles these women faced simply for being women. And some difficult conditions are glossed over, so, for example, when Sacagawea is “sold to Toussaint Charbonneau, a fur trader, who took Sacagawea as his wife,” the relationship is presented as if this was a normal family, not that of an enslaved young girl with her owner. Even stranger is the claim in the next paragraph that “the first time that Sacajawea . . . saw a white person was when the Corps of Discovery expedition arrived at Knife River in 1804.” So her French-Canadian “husband” didn’t count? The factual errors in the text begin to pile up to a disconcerting degree.

The difficulties these women faced are well described, but in much the same terms as they would be had men faced them. Minimizing the extra hurdles woman confronted fails to give these women credit for being truly rebellious, breaking from the roles society assigned them. So while the intent of this collection is laudable, its execution falters in too many ways to make it a recommended read, which is a shame, since these women are truly inspiring. What happened to the copyeditor for this manuscript? Why wasn’t basic fact-checking done? More rigorous research and historical context would have made all the difference.