We Are Bellingcat: Global Crime, Online Sleuths, and the Bold Future of News 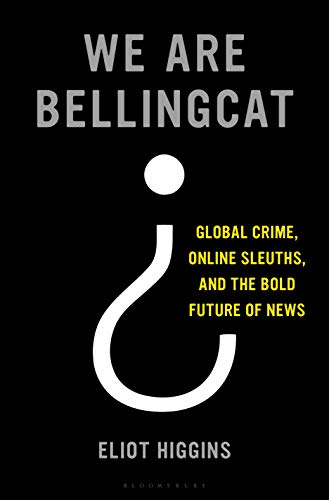 “We Are Bellingcat reveals the power within each one of us to pierce the walls of disinformation and learn the truth about what’s happening out there.”

Imagine a young man in Leicester, England, in August 2011, stuck in an anonymous administrative job, who shows up at the office before everyone else to fire up his computer and scour the internet for the latest updates on Arab Spring, news from the Libyan civil war, demonstrations in Yemen, and rapidly expanding unrest in Syria.

As his interest grows, he discovers a wide range of information sources available to him: a message board called Something Awful, the Twitter feeds of on-the-ground foreign correspondents, YouTube footage posted by witnesses and participants, statements on Facebook, and photos on Tumblr. The more he looks, the more he finds.

As he begins to fit pieces of information together about what’s happening in these trouble spots, unearthing nuggets others might be able to use, he posts his findings in the comments section of the Guardian newspaper’s live blog.

Then, one morning, he comes across conflicting claims about control of the Libyan town of Brega, a contested location with an oil refinery, an airstrip, and a strategic Mediterranean port. Gaddafi’s government asserts it controls the town, while a video posted to YouTube by rebel combatants confidently claims it now lies in their hands.

To our young man in Leicester, Eliot Higgins, it’s like catnip to his insatiable curiosity. Using Google Maps, he diligently searches for a street layout resembling what he sees in the rebel video until he finally discovers that both claims are true: the rebels have indeed captured the eastern quarter of Brega while the government still holds the western quarter.

“Seated in my office in Middle England,” he writes in We Are Bellingcat, the amazing story of the birth of a new type of journalistic investigation, “I had clarified the front line of a war zone thousands of miles away. All I had needed was a YouTube clip and Google Maps.”

Realizing the resources readily available to help him discover and understand events taking place far from his office desk, Higgins never looked back. Starting up his own live blog, Brown Moses, he began to publish his findings to assist other, like-minded amateur sleuths, and he rapidly expanded his network of contacts, sources, and collaborators.

What follows is the jaw-dropping story of what Higgins refers to as open-source investigation, the use of online sources of information freely available to everyone willing to look for them. As he asserts, 90% of worthy intelligence comes from open sources on the internet.

Working from the precept that “what people mean to show in their online postings is not all they are revealing,” he quickly racked up an impressive series of investigations into major international events.

The downing of Malaysian Airline flight MH17 over eastern Ukraine on July 17, 2014 was his ground-breaking early case. Undeterred by Russian disinformation, he and his small circle of collaborators were able to prove that Russian-backed insurgents fired an anti-aircraft missile from a Buk missile launcher that downed the aircraft, they identified the weapon itself, and, astonishingly, they tracked the movements of the launcher from a military base near Moscow to a specific field in the Ukraine where the atrocity occurred.

Through diligence and dogged hard work, Higgins quickly built up an expertise in armaments identification and an amazing process he calls geolocation, in which he uses online apps and tools to determine from mere scraps of video or photographs where something has happened and, incredibly, at what time of day it took place.

Other successes followed. He and his network undertook a number of investigations of atrocities committed by government forces in the Syrian civil war, intensely difficult work that caused some to experience symptoms of post-traumatic stress disorder after the fact. And once he’d founded Bellingcat with an inner circle of collaborators, he and the group expanded their scope to cases from Latin America and the United States to the Arabian Peninsula and Turkey.

Perhaps most notable of all was their investigation of the poisoning of former GRU officer Sergei Skripal and his daughter, Yulia, in Salisbury, England in March 2018.

Their work not only proved that two Russian intelligence officers had sprayed the nerve agent Novichok A234 on the Skripals’ front door but also positively identified them, tracked their whereabouts through leaked cellphone databases, and, amazingly, identified a third operative who had participated in the background.

Furthermore, this investigative work uncovered a list of about 30 Russian intelligence officers, 20 of whom operated internationally, in an elite unit whose covert activities could now be laid bare to public view.

Declaring that Bellingcat “is something that has never been before: an intelligence agency for the people,” Higgins asserts his work proves that “newspapers [are] not the first draft of history anymore; social media [is].”

Having expanded from “the hive mind of amateur sleuths on Twitter” to a broad network of volunteers in what he refers to as “crowd investigation,” Higgins has brought his organization forward to undertake a triple mission of support for investigative journalism, academic study, and the gathering of evidence in legal cases.

Eliot Higgins is a remarkable young man, intelligent and relentless, and his book tells a story that needs to be read, digested, and discussed.

We Are Bellingcat reveals the power within each one of us to pierce the walls of disinformation and learn the truth about what’s happening out there.