We Are Artists: 15 Women Who Made Their Mark on the World 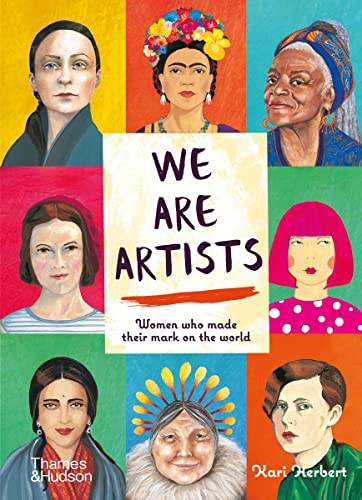 “We Are Artists is a fine example of how we should be exhorting the next generation (girls and boys) to embrace themselves exactly how they are. Each life experience is special and worthwhile. Each will make a valuable contribution in their own unique way.”

Targeted to a middle grade reader, We Are Artists offers 15 examples of women who made vastly different artistic choices in their lives.

It has recently become very important to provide young girls with role models of their same gender to reinforce their own interests and propensities as legitimate. The art world is no different, suffering from a severe underrepresentation of intelligent and competent female voices. Small as the sample is, We Are Artists does make a contribution to help fill this chasmic void.

Seeking diversity, the 15 women are from 11 countries, primarily in Europe and the U.S. with Africa and the Middle East oddly omitted. It would have been very interesting to know how these ladies had been chosen, what Herbert’s criteria were, even who else she had considered. The depth of candidates is overlooked but would have helped Herbert in her mission.

Standards such as Georgia O’Keeffe and Frida Kahlo are present as are Barbara Hepworth, Hannah Höch, and Alma Thomas who might be more recognizable to the reader’s parents. Kenojuak Ashevak (an indigenous Canadian from an igloo camp called Ikirasaq), Emily Kame Kngwarreye (an Aboriginal from the Northern Territory of Australia), and Amrita Sher-Gil (a multi-national representative of the Indian diaspora) are perhaps the most exotic lesser-knowns.

Each woman is given a chapter in which a bit of poetic intrigue introduces the scene where we find them living out their lives. It is in these first two paragraphs that we learn that Tove Jansson (Finland) lived happily in an imagination infused childhood near the sea; that Yayoi Kusama (Japan) lived in the busy world of Tokyo and, as a child, her mother tore up all of her drawings; that Gabriele Münter (Germany) lived in constant fear that the National Socialists would haul her away if her paintings didn’t fit the mold they wanted.

These introductory paragraphs are beautifully written with opening lines such as, “A raw, angular block of marble towered over her;” “The sea was as black as a witch’s cauldron;” and “It was the thing she feared the most: soldiers thumping at the door.” Such hooks do their job and draw the reader right on in to the personal circumstances of these ladies. Which is really critical to capture because their art fits in and is integral to these particular contexts.

After the first flowing paragraph follows a brief but interesting description of the women’s roles in art history, the pivot points in their artistic journeys, and their positions in the broader art scene. Succinct chapters lend only five or six pages and two or three artwork images to each woman. The sections end with what, ultimately, art meant to each of the women.

For Lyubov Popova (Russia) her artist abilities allowed her to contribute in a tangible and practical way to supporting the Russian Revolution. For Faith Ringgold, an African American growing up in Harlem, NY, during the Great Depression, art allowed her to discover a new language where she could communicate her experiences from her poor, black, female platform.

But Suzanne Valadon (France) sums it all up in a very neat and tidy quote, “no matter where you came from, no matter how difficult your circumstances were, you could be whatever and whoever you wanted to be.” In this case, they all wanted to be artists, but the encouragement breaks out into a more comprehensive life lesson: Girls are people, too. If they want to be artists, so be it, as long as they can be themselves while they’re at it.

We Are Artists is a fine example of how we should be exhorting the next generation (girls and boys) to embrace themselves exactly how they are. Each life experience is special and worthwhile. Each will make a valuable contribution in their own unique way.