We All Fall Down: Living with Addiction 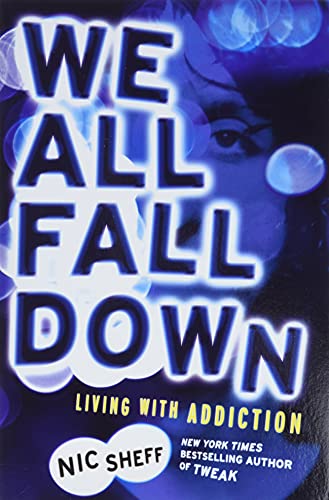 Following Tweak, Nic Sheff’s memoir about methamphetamine addiction, the sequel, We All Fall Down, chronicles the author’s continued struggle to stay sober.

It recounts his time in rehabilitation at the Safe Passage Center in Arizona (also described in Tweak), his later experiences in Savannah, Georgia, with a new girlfriend, and the unexpected changes in his life after his first book was published to considerable media attention. At the end of We All Fall Down, Sheff is back in Los Angeles after splitting with his girlfriend.

The narrative voice is similar to the one in Tweak—present tense, immediate, and mimicking orality—but in many places it is more stripped down and staccato and reluctant to linger in a moment. Here is how he describes falling in love with a girl called Sue Ellen:

This style puts a premium on the visceral; it is probably intended as a mark of authenticity. But toward what end? Readers of Tweak will notice different versions of people and events. Some of these discrepancies are trivial and surely quite defensible—changing names, for instance, in order to provide third parties with a degree of anonymity.

Other examples and omissions are more complicated, even problematic. In Tweak, for instance, Sheff says that he completed treatment at the Safe Passage Center. In We All Fall Down, the reader finds a long account of the circumstances under which he was expelled. In Sheff’s Internet blog, “New Dawn Transmission: Nic Sheff’s Journal of Recovery,” he describes many of the same events and people of We All Fall Down—in fact, some long passages are lifted verbatim from the blog and appear in this book—with the notable difference that the book version also includes references to Sheff binge-drinking, smoking marijuana, or abusing prescription drugs from his mother’s medicine cabinet at a time when he was presenting himself to the public as being sober.

How much does this matter? Who will wring their hands if another Oprah-featured memoir writer appears to have recounted something less than the gospel truth? Only the most credulous and needy can be surprised; it is hardly a scoop that addicts are prone to lying, and at a certain level Tweak and We All Fall Down are, despite pretensions of being raw or edgy, standard fare in a confessional, consumerist culture.

Even so, only the most cynical can read this memoir without sadness, and concern for Sheff’s loved ones, notably his rather fragile girlfriend Sue Ellen and his father David Sheff, whose own memoir, Beautiful Boy, gave his version of Nic’s addictions and a parent’s struggles to deal with them.

And, of course, there is concern for Nic Sheff himself, who unflatteringly documents his denials and betrayals and who, despite his professed interest in “rebel” types like Henry Miller or Charles Bukowski, often adopts an affectless, almost Warholian voice, which is repetitious but convincingly captures the anomie of the addict.

Sheff’s relatively privileged San Francisco upbringing contrasts with the situation of most methamphetamine addicts, who are usually rural and poor, as reported in Nick Reding’s Methland, which is probably the best general reference on the subject to date. On the surface, at least, Sheff has little in common with dead-end batchers in Iowa and Missouri, and the blue-collar working addicts in the meth-fueled meatpacking industry. But, below the surface, it is obvious that addiction is a great leveller—horrible suffering is horrible suffering—and the hell that Nic Sheff has experienced is every bit as bad.

He just gets to talk about it more, in a memoir industry in which he is part of the food chain. In the economic scheme of things, his role neatly parallels the blue-collar tweaker on the job. A burger, a book. Here, take it, the reader is told. Never mind the empty calories. Consume.

Sheff’s more important challenge remains in front of him, and, to his credit, We All Fall Down acknowledges as much. Some of the most interesting passages are when he recounts ambiguities, such as the conflict between his pretending to be sober, which was a self-destructive pose, and the real comfort and inspiration that Tweak and Beautiful Boy offered to other addicts and their families—which, on a book tour, could be assisted by this charade.

He also makes debatable nuances about degrees of sobriety based on the fact that for Sheff, abusing other intoxicants was not as terrible or as nihilistic as the earlier days of methamphetamine addiction. This is controversial in treatment circles, but it is better for this debate (or this version of denial) to be aired than to be swept out of sight.

Lastly, Sheff has interesting things to say about 12-step programs, notably their premise that the addict must recognize a “greater power,” which will always be an obstacle for individuals who cannot muster belief.

We All Fall Down ends with Sheff in California again, trying to stay sober and taking steps to address his diagnosis as being bipolar, which was also mentioned in Tweak, but which he did not consistently treat with medication and which likely contributed to his later problems. He offers a hopeful conclusion, and there is every reason to want to believe it.