Ways to Die in Glasgow 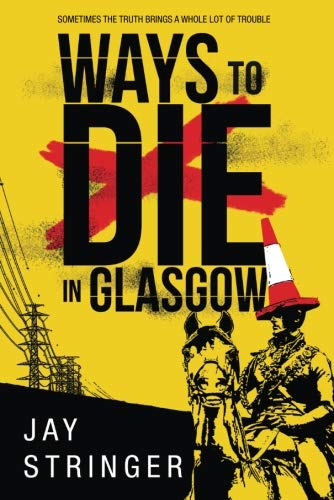 Ways to Die in Glasgow is told mainly from two characters’ viewpoints: Mackie, a drunk and ex-con with a vicious past, whose taste for violence and dodgy associates barely keeps him one step away from the undertaker’s door; and the terrifically named Sam Ireland, a reluctant private investigator barely eking out a living from her late father’s business in the tough streets of Glasgow. Being female makes it even more difficult and dangerous for the ballsy lady.

In the opening seconds of the story we discover a naked Mackie at a house of ill-repute being attack by two would-be assassins, both fully clothed. Thankfully, Mackie is able to turn the tables—or in his case—weapon, on the thugs, but not before he is shot in the leg.

Understandably not wanting to wait for the police to show up with a pocket full of questions, he quickly heads out into the street, naked, limping, and bleeding profusely while staggering in the direction of his Uncle Rab Anderson’s house, less than a mile away.

Anderson’s a notorious ex-gangster, but nowadays has become something of a celebrity crime writing author. But has he really left his bloody past behind in exchange for ink on paper, or are there still a few skeletons still to be discovered in his many closets?

Mackie eventually reaches the sanctuary of his uncle’s house and bangs on the door, hoping to get shelter before being spotted by cops or enemies perceiving him weakened by the leaking wound in his leg.

Getting no response, he fishes a spare key from a hiding place at the front door and lets himself in, only to discover someone has shot Anderson’s beloved dog, and no sign of the criminal-cum-writer.

The hard man soon goes in search of his uncle, not realizing there are others in the city with the same aim if not the same caring benevolence.

Meanwhile in another part of the city, Sam Ireland is hired by hotshot law firm, Hunter & Simpson, to track Anderson and deliver a large manila envelope into his hands. Apparently, Anderson may have mentioned someone in his latest crime novel and is about to be sued for slander.

Sam knows that if she can succeed in this case, other cases from the same law firm will follow and be quite lucrative, helping to pull her struggling detective agency out of the red and into the black.

She heads to a well-known pub where Anderson is often seen, but for her troubles she is assaulted in the dodgy establishment by even dodgier bunch of patrons and barely escapes with her life and dignity.

Unnerved but still determined, she calls on the help of DI Andy Lambert, a friend and admirer of her father. Lambert is a cop in the middle of an endless shift. A body has washed up in the morning tide, and the city seems to be living in fear. As usual, it’ll be left to Lambert to clean up the mess.

However, for all his straight talking and shooting, Lambert may not be everything he appears to be. In fact, he is hiding a deadly secret—a secret that may eventually bring Mackey, Sam, and Lambert into a collision course of confrontation and disaster.

Dark, bloody, and outrageously comical, from the very first page Jay Stringer’s stylish noir journey, Ways to Die in Glasgow, grabs you by the throat and refuses to let go until the bloody denouement. Bullet-fast chapters and smart one-liners make it a must-read, with one of the most eye-catching covers seen in a very long time.