Ways and Means: Lincoln and His Cabinet and the Financing of the Civil War 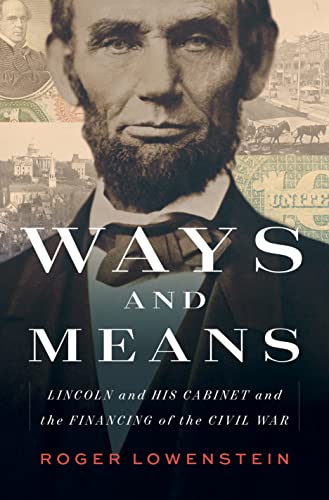 “Ways and Means represents nonfiction writing at its best, using an easy prose to enlighten with thought provoking, sometimes controversial, ideas from the very beginning.”

The notoriety of the battles and generals of the American Civil War leaves little room in this genre for complicated, mundane, social, or technical studies. Often such important topics as logistics, prisoner exchanges etc. lack solid works and that results in only passing and questionable mentions of such subjects. For example, “both the North and the South reckoned that, if a war came, money would be decisive.”

Such problems during the nation’s greatest crisis created the modern federal government. In 1860, writes Roger Lowenstein in Ways and Means, the United States government’s “main vocation was operating the postal system and collecting customs duties at ports.” “Its administrative scaffolding was threadbare, its financial capabilities primitive.”

Ways and Means begins, however, with background, that “secession was a southern project; the war came mainly from the North.” The author writes of politics and society in America in 1860 as radically different from the country that we know today, that slavery created secession but preserving the Union caused the war.

Throughout Ways and Means, Lowenstein never lets the reader lose sight of the great effects of the war and on society. Because of this conflict, for example, paper currency became the sole provenance of the federal government and not any longer issued by individual banks, a change superseded by the changes brought on by the war.

The all economically powerful enslaved produced cotton economy impoverished the South while encouraging its class system, racism, and “the South’s economic and social backwardness.” “The South was bountiful but impervious to change” and “federal improvements threatened to impose an unwanted modernity, ultimately jeopardizing slavery itself.”

Financing the Civil War comes next in this work but the author never loses the reader in complex technical explanations but rather explains concepts with relevant storytelling, such as the lessons Lincoln learned about the country’s changing economy on his trip to Washington on 20 different trains to his inauguration!

Lowenstein similarly contrasts the backgrounds and very different personalities of Lincoln and his Secretary of the Treasury Salmon P. Chase. The new secretary’s “economic knowledge was limited.” “Chase tended to see right and wrong in absolutes” but “Lincoln appreciated that political issues were often matters of degree.” Chase definitely was a rival in Lincoln’s “team of rivals.”

“At the outset, neither government had a financial system even marginally adequate to support a major conflict.” They not only needed to find funds to pay for a war but also invent the means of distributing the money. State governments in the North had to step up to save the Union and, sometimes incidentally, their leaders called for an end to enslavement.

Lincoln inherited a financial mess. The Panic of 1859 had shut down the economy with war fears and followed closely the Panic of 1857. James Buchanan’s previous administration had doubled the national debt with short term notes instead of long term bonds. His incompetent Secretary of the Treasury, secessionist Howell Cobb of Georgia, resigned but not before accusations of his treasonously sabotaging the credit of the United States.

Seceding southern states threatened to seize northern property and to repudiate debts owed to banks and individuals in northern states. They waged war in the New York Stock Exchange before the first shot was fired on a battlefield. “Financial pressures spread like an advanced signal corps of sectional conflict.” Seceding states seized custom houses and therefore cut custom duties paid to the United States. The new government also profited from taking over federal mints.

War threatened to reduce trade and therefore revenues from tariffs. Chase complained to Lincoln that “his biggest obstacle” “wasn’t financial but military.” Failure of the federal armies hurt government credit and investment in fighting the war. Democrats attacked the Lincoln administration for the economic crisis and by claiming that financially supporting the war effort meant that eventually freed Blacks would swarm across the country and take jobs from whites.

Lincoln and Chase fought back long and short term. Short term notes continued for a time, a blockade of southern ports began, and direct taxes were imposed. An emergency session of Congress raised taxes on imports. Chase, through Jay Cooke, successfully sought investment from the average American. Congress reformed banking and the means for federal loans.

Lowenstein contrasts how the North paid for the war with the Confederate states, with how the war changed to become about abolition of slavery. Both sides created national currency, suffered from inflation, borrowed from Europe, and had to trade with the enemy to survive. The South suffered from the war fought on its soil, profiteering, self-emancipating African Americans, shortages, and the blockade of its ports as its currency became worthless and “the southern economy was slowly imploding.”

Despite the crisis, “Lincoln was fixated on promoting prosperity,” not just holding off economic collapse and paying for the war.  “Lincoln and Chase were avatars for Republican Progress.” Also, Congress members “were less intent upon preserving [unlike the southern politicians who by then had left], more on building and improving.” Consequently, Lincoln signed into law the free land Homestead Act, Department of Agriculture, Transcontinental Railroad, and Morrill Act for higher education. Even from the ruins of the plantation, the New South would emerge.

These actions set the course for the economic need for the Emancipation Proclamation that threatened abolition in the remaining territory of the Confederate states. A war not intended to end the institution of slavery mutated into a struggle for African American liberty that continues today.

Chase had won the financial war and the future was bright for winning on the battlefield.  He now plotted to replace Lincoln as President of the United States!

Ways and Means represents nonfiction writing at its best, it uses an easy prose to enlighten with thought provoking, sometimes controversial, ideas from the very beginning. A solid work of scholarship, this has annotation and illustrations.