At the Water's Edge: A Novel 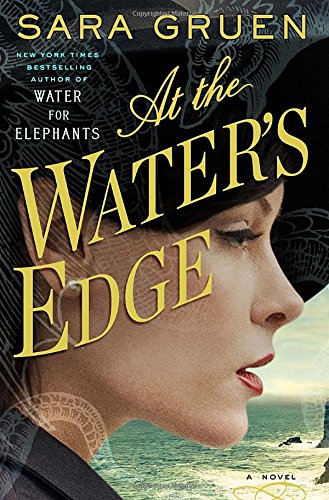 “a beautifully written story that takes some effort to buy into. If you can flow with its subtle pace, then a satisfying read follows . . .”

The opening chapters of this book are a head-scratcher, in that they repeatedly raise the question, “What’s a nice girl like you doing with losers like these?” in the reader’s mind.

But that proves to be the point: how a deep-natured woman is raised to be shallow by overprivileged, underprincipled, high-society friends and relations. Then how she overcomes that influence and emerges into her true self.

Not surprisingly, it takes hardship to get there. Whether or not she will make it forms the story’s suspense.

A second prong of suspense launches from the first three chapters. In a bing-bang-bong, the narrative jumps between two points of view and three time periods, leaving the reader to wonder how on earth the disparate elements will find their way together.

It takes 350 pages to get there, one eloquent sentence at a time. Starting after America enters World War II, Maddie and her husband, Ellis, along with his best bud Hank, travel to Scotland to prove the existence of the Loch Ness Monster (!). This is in response to the failure of Ellis’s father to do so, and the young man seeks to both exonerate his parent and return to grace in his eyes, so to keep his allowance.

Both Ellis and Hal went through the motions of enlisting but failed due to color blindness and flat footedness, respectively. So they carry on in wanton obliviousness to the war. That is, until they cross the Atlantic and witness a U-boat sinking a ship—which wakens Maddie to truth and starts her metamorphosis into a compassionate, thinking person.

The accommodations in Scotland fall far short of those she and her peers are accustomed to. But while she adapts, Ellis and Hank cling to their delusions and progressively alienate both Maddie and all the people in the community. Ellis in particular grows more harsh and stupid, proving that he has a drug problem that leads him to rash and violent acts.

Maddie turns from him in self-defense and slowly, involuntarily, assimilates herself into the impoverished Scottish reality. There she finds the first human and loving relationships of her life. But she must solve the problems of extricating herself from her deteriorating marriage and learning to believe in the validity of herself and her viewpoint—all while the war is dropping bombs and causing miseries around them.

Indeed, this book provides a glimpse of what the war was like for those left behind, a perspective often overlooked because of the extremes of cruelty and destruction that dominated at the front. A few supernatural moments feel out of place, but they make sense to Maddie so can be accepted without much more than a flinch. Everything else is so realistic-feeling that Maddie’s experiences make their own sense.

At the Water’s Edge is a beautifully written story that takes some effort to buy into. If you can flow with its subtle pace, then a satisfying read follows, the taste of which lingers long after finishing.