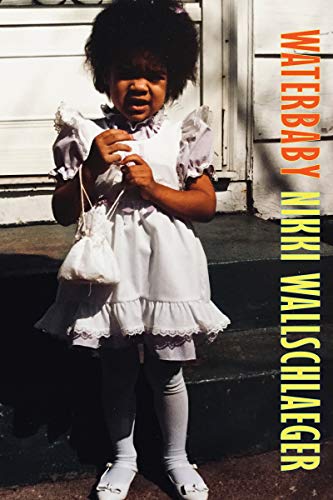 “The poems in Waterbaby are present. They tell the truth and will inspire readers to lust for more.”

Poet Nikki Wallschlaeger gets right down to it in her new book, Waterbaby. Beginning with the first poem, “Nobody Special,” she lays her book’s foundational reality by belting out blues that sets the cornerstone in place for what is to follow:

Pick up my candles and dust them

I don’t know when the spirit gets in

housework is done by nobody special

that’s the way it’s always been

Been working since I was a babe

I come home now and work for free

housework is done by nobody special

that’s the way it’s always been

a washerwoman serving the cream

As the opening poem continues its travels, readers are being prepared for the hard lines Wallschlaeger rolls out that lay out life as easy as warmed butter spread on toast, dealing with a body, bodies, dealing with injustice in ways beyond the ability of words yet allowing her words to carry themselves beyond the confines of injustice. To say that her poetry is powerful is to understate their effect. The poems in Waterbaby seem to nail themselves to the wall and then spontaneously combust. A reader can’t help but feel the effect of Nikki Wallschlaeger’s words. Take a look at “Notes on the New Reconstruction:”

The stockroom only the cooks know. Bone bloc broth

how our runaway slave feet gotta close-read the tides.

floorboards. My gods are always horrified by the living,

the gooseflesh of a bacon-wrapped fig inside a pig,

A country surreptitiously playing itself with well-worn

and well-torn secrets still plays itself.

Homegirl was twenty-two years old when she outwitted him.

No one cares about a past that’s supposed to be done.

In her poem “Way of the Road,” she writes:

I closed my eyes

so I didn’t have to

look at it anymore.

When I opened my

eyes again it was still there,

but I was farther down the road

than the last time I was willing to rest.

The road is an exasperating concept.

I’d get sent to jail if I drove the car

off into a field of ragweed and chicory

but in my mind something resembling

freedom would spark until the highway

patrol came to take me away

Wallschlaeger is like a carpenter in this book. Or maybe the combination of an excavator, stonemason, sculptor, and prophet rolled up in a time traveler’s body. When she builds poems, they are houses of words anchored to rock foundations, but a reader exploring their structure can’t help but gain some sense of future vision wrapped in déjà vu. “It’s kinda like you’re a clothesline with no clothes. The whole point is / to have clothes hung off it or else it’s just a wispy string fed to the air, / right? You’re naked before the universe” she says in her poem “Astral Traveling Got Me F*cked Up.”

While in her poem “Women are Doomed to Be the Angels of Love” she writes:

“Where do bad folks go when they die?” asks Kurt Cobain on my

favorite Nirvana album. I replace “folks” with “hearts” and marvel at

the candor of strange smarmy men on TV who want

to be president, who have no clue being part of a community is

different from purchasing investments in a city. My heart is stone sore.

My heart wants to close forever,

to protect me from market combat. But as a woman bred for strength

and openness I lack options. I’m pretty good at the precarious art of

choosing what gets in,

since doom makes a great gatekeeper,

it’s rainwater in a vase of roses on a sleeping hero’s grave.

That this book is so hard hitting isn’t surprising. Wallschlaeger’s work has appeared in The American Poetry Review, The Boston Review, The Chicago Review, The Georgia Review, The Iowa Review, Brick, Poetry, Kenyon Review, and a long list of literary journals. She has authored three other full-length collections of poetry and an artist book.

Waterbaby is a full glass of insight and reflection, hard line remembrance, and the truth of yesterday and today with a prayer for tomorrow’s reality in America. Nikki Wallschlaeger is a poet who throws her poems to the air so that readers can catch them. She is a magician who turns mere words into truth in a way so alarming, every reader will be affected by their impact. She is a boxer with well-placed punches again and again, a builder representing reality that can be seen, touched, and tasted. The poems in Waterbaby are present. They tell the truth and will inspire readers to lust for more.