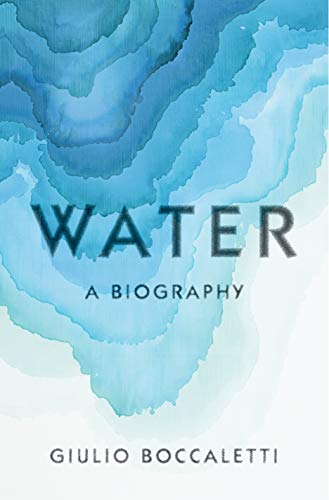 “Giulio Boccaletti in Water: A Biography tells a history of human manipulation of the environment. The author does this by explaining big ideas effectively and simply.”

Millions of manmade structures support the public’s “illusion that water on the landscape is, or should be, nothing more than an inept background on the stage of human events.” “Modern water infrastructure has replumbed the planet,” “around 20 percentage of the world’s runoff,” in “the most radical transformation of landscape in history.”

The story of water can be told many ways but Giulio Boccaletti in Water: A Biography tells a history of human manipulation of the environment. The author does this by explaining big ideas effectively and simply. This book explains how water “tied individuals together in mutual dependence as they tried to deal with their environment.”

Water also includes discussion of water in terms of flood and of travel. This work, however, does not so effectively or thoroughly discuss the consequences of over dependence on water, such as overpopulation or environmental degradation from water management.

Geophysical events and features mattered such as India’s monsoons and China’s Loess Plateau but only because of water. Human societies had “to make radical adjustments to their relationship to water” and, subsequently, it “has left deep cultural traces guiding and human adoption.”

“The story of water is not technical, but political,” as Boccaletti writes in Water. It “shaped the structure of society” in ways of innovation and the spread of ideas that included “the rise of the first long-distance markets” with all that involves in finance and trade.

Water “is a story of ideas.” “Explaining why things happen is not the same as explaining how things happen.” (Author’s emphasis.) The author does this by using the Fertile Crescent, China, Egypt, the Old Testament, Sparta, Athens, the Mississippi River network, the British East India Company, and more, to illustrate his points. The Roman Empire in particular converged need with managed hydro-engineering possibilities to such ends as feeding its army.

Boccaletti divides Water into four parts, part one with how water shaped human society “into shaping statehood.” In part two, the author outlines how “antiquity was metabolized by European nations into the modern state.” How “the force of industrialized capitalism” is so powerful that it is “sowing the seeds of dangerous illusion” makes part three and four covers “the undercurrents of water’s agency still flow as powerful as ever.”

Life could never have formed on Earth if the planet had begun covered with water as it is today. The Earth supports life, however, because water keeps the planet in “radiative-conductive equilibrium.”

That Homo Sapiens won out as the only surviving humanoid species could be due to their prowess “as hunters or environmental change.” Creation stories and “reached a deeper level of norms and behaviors . . . because it was clearly germane to the destiny of a nation.” Land ownership became important but only of it involves water.

In Mesopotamia, people first began harnessing water for domestication of animals/plants, irrigation engineering, law, religion, and trade as part of complex societies. On the Euphrates and Tigress Rivers, the Eden of the Bible, people also had fishing and water born transportation.

Water thus “did not just contribute to shaping the state in terms of its activities—calendars, public works, etc.” It generated art, cities, and writing, all of which existed earlier and without human manipulation of water but “water technologies spread widely” such ideas with all of the consequences.

Water created ancient cities of legend such as Babylon, Nineveh, and Urak, but “it also sowed the seeds of their destruction.” Conflicts over water for irrigation and transportation, or just for power and wealth generated by water “played out over generations.” Dependence upon water also led to the collapse of societies and massive migrations to places like Egypt in times of drought.

“By the time the nineteenth century was over, the United States had itself up to become the most successful architect of water geography in history.” “Aside from its mix of institutions, law, and natural resource endowment,” its lack of water resources in some areas inspired the creation and spread of steam technology across the New World as a substitute and supplement.

Imperialism also had a basis in water. In addition to canals, British India profited on opium to China and textiles to the world dependent on water management. “The British aspired to transform the rivers of India and soon Mesopotamia and Egypt into a breadbasket for a greater empire” [where tens of millions still starved to death]. The age of water made Britain a hostage of blockade.

Boccaletti argues “that three trends emerged at that point.” Demographics, the need to feed more and more people, became important. In the second, industrialization to feed growing consumerism required more energy and better transportation. Political, “that water could be an instrument for nation-building” is the third.

Toward those needs, the major “hydropower generation” began in the late 1800s as a technical revolution to transfer power from muscle to water produced electricity. Widespread communication of ideas first created by water civilizations of thousands of years earlier brought about the rapid expansion of this technology across the globe.

This work touches on the role of water in all major historical events in ancient and modern history, usually in ways not obvious in popular thinking. Discussion of the negative consequences of water management too seldom makes an appearance in Water, however. Its extensive scholarship is annotated.