The Watchman's Rattle: A Radical New Theory of Collapse 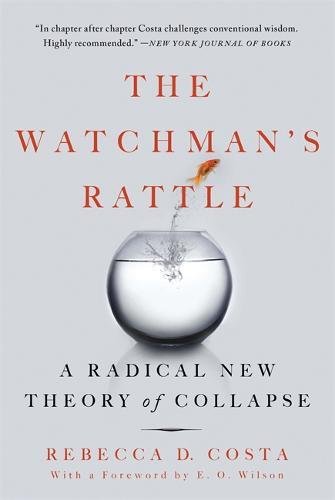 If there were a “Watchman” to protect us from danger, he would be shaking his rattle vigorously right now. We are in danger of becoming extinct as the signs of the collapse of our civilization are obvious, according to Rebecca Costa’s excellent and thought provoking new book, The Watchman’s Rattle.

The theme for The Watchman’s Rattle can be summed up in the story of the sophisticated and scientifically ancient Mayan society: Unproven beliefs became the substitute for facts. Once this happens, as the practice of beliefs cannot result in real solutions, the inevitability of failure takes place, and disaster is the only outcome.

The Maya suffered the catastrophic events that lead to their demise.

Costa reveals this lesson in a matter-of-fact, clear, crisp dialogue with her reader as though we were having a conversation drinking tea overlooking the magnificent northern California coastline of her native state.

In chapter after chapter, Costa challenges conventional wisdom, sometimes gently shaking us by the shoulders, to make her point. Costa uses various memes—pronounced like gene, and defined as “any widely accepted information, thought, feeling, or behavior”—as the vehicles to move forward from the most basic of current issues. For instance, memes are the foundation upon which we teach our children what is true because it has always been this way, such as “wait an hour after you eat before going swimming.” Science has debunked this theory, yet it is passed on down from one generation to the next.

Her examples challenge what we have always accepted comfortably as truth—except after reading her book, we become uncomfortably questioning. From the “Personalization of Blame,” to phony facts she calls “Counterfeit Correlation,” Costa smacks down one Sacred Cow after another. Our conviction of what we have believed in forever is her fodder, which she consumes ravenously.

Costa takes aim at everything we have always accepted as our truth or reality. Unfortunately, science has shown us—if we choose to pay attention—that we are on the road to disaster. These are facts. We have suffering from severe water shortage, we are engaging in senseless wars, our food is tainted, our air is poisonous, and we are getting fatter and fatter every day.
She argues that we can change the course of inevitability only if we shatter the status quo of “business as usual” and lift ourselves out of our comfortable intellectual easy chair, venturing out from the world of known assumptions and erroneous conclusions. Only then may we mitigate our own destruction.

Costa confronts us with a barrage of “Counterfeit Correlations.” These concepts alone are enough to cause the reader acute abstract anxiety. Costa’s “Counterfeit Correlations” or the “Third Supermeme” is a concept that has “the appearance of being firmly rooted in logic and empirical proof.” However, she explains that these concepts are misleading as a form of logic. These conclusions are false.

Counterfeit Correlations occur because we accept them as a substitute for truth when in fact they are manipulated evidence. The danger is that few of us have the time to check everything presented to us as fact. The confusion over unproven beliefs can have dire consequences, just as in the demise of the Mayans.

The problem with correlation is that it often implies causation, but that does not necessarily “mean that cause and effect have been proven.” Examples of “Counterfeit Correlations” include:

What is shocking, as Costa tells it, is that 62 percent of the people who saw this list believe these correlations are true! Forget the fact that there is no science behind any of these statements. We barely have any standards for proving cause and effect. If it sounds good, it must be true.

With this kind of intellectual rigor (read: lack thereof), how can we expect to save ourselves from the fates that killed off the Mayans, Romans, the Khmer Empire, and other advanced civilizations?

We can’t, according to Costa. The best we can do is to try to mitigate the damage. Regrettably, thought, The Watchman’s Rattle puts to rest any notion of conserving our way to sustainability, as many would like to believe is possible. Mitigation is not the complete answer, Costa tells us, as the purpose of mitigation is to do what the term implies: to lessen the disaster at hand.

One such disaster is the ongoing global drought and therefore lack of sufficient water. Among the many scientists Costa interviews is Dr. Martin Perry, an economics professor and environmental visionary at Rutgers University. Perry says that we cannot mitigate ourselves out this problem. The water dilemma is one more example of counterfeit correlation: If we conserve water, we will have the answer and solve our predicament.

Yet, in The Watchman’s Rattle, that and other issues, such as solving one problem at a time, are quickly dispatched as erroneous and ineffectual approaches.

Costa is good at coming up with phrases that capture comprehensive scenarios such as “parallel incrementalism.” The phrase clearly describes its meaning: Parallel: the performance of more than one operation at a time. Incrementalism: making changes by degrees. This is a way of attacking a problem using everything available at the same time rather than try one solution or approach, waiting to see if it works, then trying another.

The results of these and other insights in Costa’s The Watchman’s Rattle are truly intriguing and thought provoking. This cerebral book challenges our capacity to comprehend our fate as a merely inadequate species destined for doom like others before us.

Our inherent hubris about our being as evolved as we can possibly ever be, is another message that one can take from The Watchman’s Rattle. If we do not heed the lessons of the past, if we continue to ignore all the warning signs that threaten human existence—such as global recession, powerful pandemic viruses, terrorism, rising crime, climate change, rapid depletion of the earth’s resources, nuclear proliferation, and failing educational systems—we are doomed to extinction. However, if we do pay attention, Costa lays out a plan that places us in an excellent position to change a repetitive pattern of decline.
This is an excellent book, rich with challenging thoughts as well as perceptive solutions. Costa offers excellent research in this fully developed dissertation on the warning signs and potential solutions to human and global destruction.