Watch Her (A Hester Thursby Mystery) 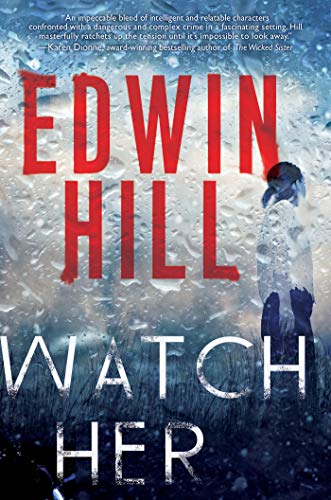 “Whether you’re drawn to Watch Her for the high-fidelity Boston setting, with its contrasts of gritty working-class life and cultured wealth, or for the dramatic and classic interactions of the motivated women in it, or for the deft plotting and intense pace, Watch Her could be one of the top mysteries closing out 2020.”

Edwin Hill’s new Boston crime novel, Watch Her, spins an intense family drama around a set of close friends in the arts and education world of the wealthy city. Cleverly hung on the changes already taking place at the college level before the Covid pandemic, Hill positions his well-varied set of close friends within the structure of a for-profit college that’s just changed hands, to the young and manipulative Vanessa Matson.

The core characters are the school fixer, Maxine Pawlikowski, who’s been cleaning up Matson messes and managing the college growth for 20 years, and especially police Sergeant Detective Angela White and Angela’s long-time ally, Hester Thursby, who’s both a librarian and someone good at finding lost people.

As much a character as the people is the Matson family home, a restored architectural gem: Pinebank Mansion. Boston and especially Jamaica Plain readers will know right away that this calls for suspension of disbelief, as the remains of the glorious 1868 Pinebank Mansion were condemned and destroyed by the Boston-edge city of Jamaica Plain in 2007. But Hill is not the first author to find the structure so haunting and lovely that it called for a resurrected role anyway. And it makes a fitting “madwoman” location for the clearly disturbed and alcohol-abusing Jennifer Matson, mother of Vanessa and wife of newly retired college head Tucker Matson.

When Maxine takes Angela and Heather with her in response to a crime reported by Jennifer, only Maxine herself knows what’s going on, and in her own way, she’s enacting yet another fix for Jennifer, whose daughter was killed two decades earlier. By Jennifer herself, and covered up? Perhaps. But this is now:

“Maxine poured tea and handed a cup to Angela, who let it sit while an uncomfortable silence built around them. She wanted to see who would break it and how, but to her annoyance, Hester spoke first. ‘Why don’t you walk us through what happened?’ she said. ‘You heard a noise upstairs. What did you do then?’

‘I took a fire poker and went to investigate . . . I searched the second floor, flipping on lights. I was convinced I’d find a man wearing a ski mask. Finally I heard the rain through an open window in my office. That’s when I texted Maxine.’”

Hill’s brilliant twist to the crime genre is crafting a fixer who’s a strong woman with terribly mixed motives. Slow revelations about Maxine accumulate, as Hester, the most straightforward and approachable of the women, begins to peel back what happened around the death of that child. It’s Maxine who knows and persistently hides the truth from back then, and Maxine who was told in the past to step up for the child who survived: Vanessa. “Watch her.”

With powerful emotional twists and well-considered criminal revelations, Hill unspools the effects of power given to those who don’t have enough moral compass to manage it properly. Eventually the reminder to “watch her” becomes a stand-in for the magician’s order to “watch my hands”—each of the women has depth and complications that the reader must eye closely, in order to come to a solution to multiple crimes, as Hester’s drive to reveal and save plunges her into extreme danger. What will people do when they have nothing left to lose?

Whether you’re drawn to Watch Her for the high-fidelity Boston setting, with its contrasts of gritty working-class life and cultured wealth, or for the dramatic and classic interactions of the motivated women in it, or for the deft plotting and intense pace, Watch Her could be one of the top mysteries closing out 2020. Highest compliment of all to a crime novel: It’s worth reading again, for the strength and energy of what’s unveiled. It’s a sequel to The Missing Ones and Little Comfort, and Hill signals more to come in the Heather Thursby Mysteries.