Washington's Rebuke to Bigotry: Reflections on Our First President's Famous 1790 Letter to the Hebrew Congregation In Newport, Rhode Island 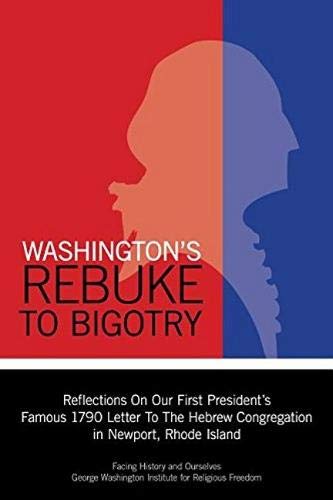 Americans remember George Washington for a great many things but not as one of the great lights among the intellectuals of the Enlightenment era and the American Revolution. That is a pity as he should be known for his intellect and vision. Of the latter, he could see further than even Benjamin Franklin and Thomas Jefferson, to the Pacific and beyond in his American empire of not just territory but ideals. Too bad that he did not write a book to express the important ideas that he put forward so well in his public addresses.

In this relatively short collection of essays, individual scholars including Supreme Court Justice Ruth Bader Ginsburg offer different takes on aspects of a brief but very public letter that President George Washington wrote about liberty and tolerance in 1790. They explore the meanings from his time to the present.

Although each piece is concise, most of these pieces have annotation. They represent solid, thought provoking scholarship that uses brevity as an effective and powerful teaching tool about the past but also about understanding ideas. This work would be worthwhile reading for early American history and even Enlightenment classes above the survey level.

Washington chose his actions and words carefully to mean what he said not just for his generation but also for those that would come. Jonathan D. Sarna points out “the fact that Jews were included at all is noteworthy.” This congregation was small and Washington had and would receive again letters from other Jewish congregations. On August 17, 1790, Moses Seixas, warden of the Hebrew Congregation in Newport, Rhode Island respectfully asked, with allusions to the Old Testament shared by Christian and Jew alike, just how the new federal republic would view his people.

President George Washington responded in kind shortly after. He knew that his answer would be published, and he used the opportunity to make a memorable statement against religious intolerance than could (and would) be interpreted in the future as an attack on bigotry in all forms and all places. Daniel L. Driesbach writes in his essay “Washington understood a great American innovation—the rejection of a regime of toleration for one of liberty. Many Americans have called this America’s most profound contribution to political thought.”

Seixas quoted the Bible in referring to each “sitting under his or her own vine or fig tree” that Washington would then use to argue for liberty, privacy, and property, as pointed out by Robert R. Burt and other essayists. He rightly believed that these ideals would found an international revolution including as Eli N. Evans writes, that toleration is not an indulgence “but owed as an obligation to all.”

Washington took advantage of being in Newport in 1790 because Rhode Island with its small population had most resisted adopting the Constitution that robbed it of equality with other states. He saw that document, however, as the mechanism for protection of individual liberties in the new nation. Rhode Island has an important history of liberty of religion (not the same as religious toleration) that coincided, as pointed out by some of the authors of these essays, with a complicated past (and future) regarding slavery.

Writers would cite and quote from this Washington letter thousands of times. As Jonathan D. Sarna wrote, “Washington set a high bar, not only for his successors but for Americans of all faiths and creeds.” Eve LePlante, for example, reviewed the struggle of a private Quaker school only fifty miles from Newport in the 1830s to teach black women. It argues on principal over whether religious rights could trump laws based in bigotry with complications involving women’s rights to the point of even “whether or not to allow women participate equally” in the movement to end slavery!

Even the last state laws concerning state religion and restricting various faiths saw repeal only decades after 1790 and this issue is still important in our own time as pointed out in the essays of Eboo Patel, Robert A. Burt, David Waters, and others.

James Madison, author of the so-called Bill of Rights passing through the state approval process in August 1790, recognized that from its beginning America was more about exclusion than acceptance. Thomas Jefferson’s views on race used science to argue that point. This book begins with Pulitzer Prize winning scholar Gordon S. Wood’s essay “The Origins of American Liberty.” The 13 states had varying amounts of state supported religion and intolerance left over from colonial times. Essayist Eboo Patel quotes Malcom X about Plymouth Rock landing on people like his whose ancestors did not land on it.

Religious toleration reflects both the worst and the best of the emerging American culture. Even the ratification of the first amendment did not end all established state religion, religious toleration etc. except as far as the federal government was concerned. The article that guarantees that no one denied office based on religion, however, set the standard for America and religion that we still work to achieve in different ways. Martha C. Nussbaum points out that Madison (and his political partner Thomas Jefferson) and Rhode Island’s staunchly Puritan founder Roger Williams (see the essay by Charles C. Haynes) saw that even a tolerant state religion by its existence diminished the rights (equality) of its citizens.