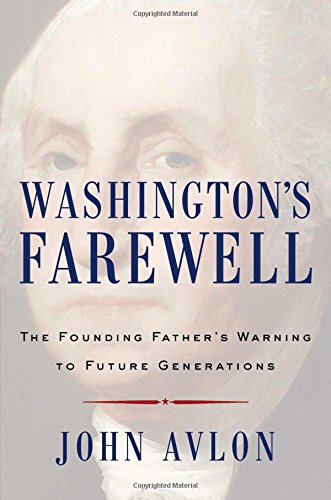 John Avlon calls George Washington’s Farewell Address “the most famous American speech you’ve never read.” His new book, Washington’s Farewell, explores the history, intellectual formation, and legacy of one of the most important and enduring documents in America’s political tradition.

James Thomas Flexner famously characterized Washington as the “indispensable man” of the American founding. As commander of the revolutionary army and the country’s first president, Washington ensured the survival of the infant republic amid war against the world’s greatest empire and the vicissitudes of the French Revolution.

Avlon, the editor-in-chief of the Daily Beast, shows how Washington’s experiences as a landowner, farmer, entrepreneur, soldier, and statesman shaped the Farewell Address. “It was the work of a lifetime,” writes Avlon, “an autobiography of ideas.”

It was also, in part, the work of James Madison and Alexander Hamilton, two of the intellectual giants of the country’s founding. Indeed, many of the ideas set forth in the Farewell Address can be traced to The Federalist Papers, the brilliant polemic written by Madison, Hamilton, and John Jay to facilitate the ratification of the Constitution.

Madison and Hamilton in The Federalist Papers looked to the examples of ancient Greece and Rome, as well as the writings of Plato, Socrates, Cicero, Thucydides, Hume, and Gibbon, for insight into human nature and wisdom in establishing the institutions of republican government.

Washington’s favorite classical philosopher, Avlon notes, was the Roman Seneca who taught the values of virtue, moderation, and temperance—values that inform every page of the Farewell Address.

Avlon divides the Farewell Address into “six broad . . . pillars of liberty”: National Unity, Political Moderation, Fiscal Discipline, Virtue and Religion, Education, and Foreign Policy, and he traces the foundation of these pillars to formative events in Washington’s life.

Washington’s call for national unity pervades the Farewell Address. As army commander, he witnessed firsthand the difficulty of persuading the several states to provide the necessary funds to wage war effectively. As an interested citizen, he saw how the weaknesses of the Articles of Confederation endangered the new republic’s survival in the face of enemies at home and abroad. As president, he used force to crush the Whiskey Rebellion in western Pennsylvania.

His urging of political moderation derived from the political infighting and factionalism that bedeviled his administration. Hamilton and Thomas Jefferson battled each other throughout Washington’s presidency, resulting in the formation of ideologically diverse and rival political parties.

Although a wealthy landowner, Washington never felt economically secure. As a businessman, he understood the value of trade, fiscal discipline, and good credit. As president, he understood the need for revenue via taxes to fund the essential roles of government, which he believed to be limited.

Avlon views Washington’s view of religion and virtue as “practical and pluralistic.” He downplays Washington’s personal religious beliefs as a devoted Anglican Christian, and emphasizes his commitment to religious tolerance.

What is clear is that Washington viewed morality, virtue and religion as inseparable, and said so in the Farewell Address. Michael and Jana Novak’s Washington’s God is a more reliable reference for the impact of Washington’s faith on his governance.

The Farewell Address contains only a brief paragraph on education, but Avlon focuses instead on Washington’s proposal in other venues for the establishment of a national university. One senses here, as elsewhere in the book, Avlon’s willingness at times to transform Washington into an enlightened, liberal 21st century statesman.

Perhaps the most famous pillar of Washington’s Farewell Address relates to foreign policy. Avlon describes it as “peace through strength,” the principal goal of which is “independence.” It is an apt description.

“Observe good faith and justice towards all nations,” Washington wrote, “cultivate peace and harmony with all.” “[N]othing is more essential,” he continued, “than that permanent, inveterate antipathies against particular nations, and passionate attachments for others, should be excluded.”

The United States, Washington explained, should not go to war because of sentiment; the nation’s interests must be our guidepost. “Europe has a set of primary interests which to us have none; or a very remote relation,” he noted. Europe’s controversies are not ours, and “it must be unwise in us to implicate ourselves by artificial ties in the ordinary vicissitudes of her politics, or the ordinary combinations and collisions of her friendships or enmities.”

Washington recognized the importance of geography to foreign policy, lauding America’s “detached and distant situation” from European rivalries.  This enabled the United States to grow politically and militarily stronger and “choose peace or war, as our interests, guided by justice, shall counsel.”

This was not, as Avlon points out, a call to isolationism. Though Washington recommended steering clear of “permanent alliances,” he foresaw the need for “temporary alliances for extraordinary emergencies.” Independence of action was the dominant theme.

Avlon notes that the Farewell Address influenced U.S. foreign policy throughout the 19th century and into the early 20th century.  It was invoked by many of his successors and continues to be read each year in the U.S. Senate on Washington’s birthday. Avlon believes that Washington’s advice and warnings still have relevance to today’s world.

The book’s appendix contains the complete Farewell Address. Avlon is surely right that it should be more widely read because, as he notes, “it retains the ability to offer insight.”