The Wars of Afghanistan: Messianic Terrorism, Tribal Conflicts, and the Failures of Great Powers 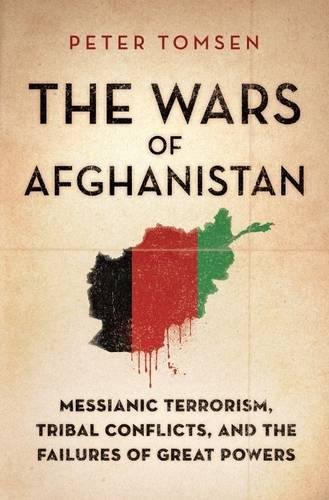 Former Ambassador and U.S. Special Envoy on Afghanistan Peter Tomsen’s first book has much to commend it. First, it provides an in-depth encyclopedic description of historical events in and about Afghanistan.

Second, Mr. Tomsen provides many examples of the diverse range of political beliefs and behaviors among Muslims in Afghanistan, its neighbors, and more broadly worldwide. For example, he rightly points out that “severe bedouin restrictions on women that were not mandated in the Koran or Sunnah became deeply entrenched in [the] Wahhabi” form of Islam practiced in Saudi Arabia and adopted by other minority Islamic sectarian groups in Afghanistan and elsewhere.

Third, Mr. Tomsen convincingly presents the reasons why Afghanistan is largely an artificial state with essentially fictitious sovereign boundaries while also well-demonstrating the fact that central governments have been weak throughout Afghanistan’s entire history, although he does not follow that analyses through to its logical conclusion. Fourthly, substantial evidence is provided for a reader to conclude that throughout Afghanistan’s history very localized political interests almost always trumps esoteric interpretations of religious beliefs. And finally, in the nine chapters and 251 pages of Part III, the book provides a fascinating “first person narrative account . . . of my meetings with Mujahidin politicians and commanders, the former Afghan King Zahir Shah in Rome, Pakistani intelligence officers and other Pakistani officials in Islamabad, Saudi princes in Riyadh and Jeddah, and Soviet officials in Moscow” during the three years that Mr. Tomsen served as the U.S. Special Envoy on Afghanistan from 1989 to 1992.

Unfortunately, the main text of this book weighs in at 714 pages divided into 25 chapters distributed among four “Parts.” Given the book’s broad scope, it is not clear for whom it was intended. It is too long for policy makers, their staff, or as supplemental reading for undergraduate university courses. It is also too densely packed with unfamiliar names, places, and events for a more general readership. And that leaves academic specialists, graduate students, and foreign policy lobbyists, most of whom are familiar with the key persons and events recounted here. Many readers among that latter group are likely to be disappointed by this book for several reasons; several examples of which are identified further below. But an underlying problem is that Mr. Tomsen has his own strong views about why Afghanistan’s history has been as violent as it has and only rarely identifies those that are in dispute or those who disagree with him.

Perhaps because Mr. Tomsen was based in Washington, DC, during his tenure as Special Envoy to Afghanistan and apparently was not allowed to set foot in Afghanistan during that time, the book is written from the perspective of a foreigner’s interactions with, and understanding of, other top-level leaders rather than the ordinary Afghans who actually fight against those leaders on both sides and who ultimately determine actual political outcomes on the ground. Perhaps that limited perspective accounts for his charge that a triumvirate of Saudi financiers and radical clerics supported by the Saudi ruling family, Pakistan’s military establishment through its Inter-Services Intelligence agency (also known as the ISI), and America’s CIA is primarily responsible for both global terrorism committed by radical Muslims and the resurrection of the Taliban in Afghanistan. He believes, therefore, that that an “acceptable outcome” that “bolster[s] our national security; . . . redeem[s] the sacrifices of Americans, allies, and Afghans; and lift[s] the horizon of a region deeply scarred by conflict” can only be achieved if that triangular collaboration is fully understood in the broader context of “Afghan history and culture.”

Mr. Tomsen also appears to have a limited understanding of fundamental disputes among both Muslim and non-Muslim scholars with respect to such things as: (1) whether or not fatwas are legally binding or only scholarly opinions, who should issue them, and within what contexts or political regimes they might be legally binding and on whom or (2) how the term “jihad” as used in the Koran should be interpreted. Partial allusions to Islamic beliefs or sources of Islamic jurisprudence without any contextual explanation compound that problem.

As only one example, Mr. Tomsen cites Abdullah Yusuf Azzam (“a Palestinian Islamic Scholar”) as teaching “his students [at Jeddah’s prestigious Abdulaziz University] that jihad should be considered the sixth pillar of Islam” without identifying the other five (at least within an endnote). As it is, a previously uninformed reader is left hanging as to the contrast that Mr. Tomsen might be making. The same problem exists when he refers to Koranic scriptures and/or hadith without any explanation about the jurisprudential differences between them.

Further, some scholars are likely to be troubled by several logical leaps linking various Islamic radical or terrorist groups existing at different points in time and/or locations to each other. As only one example, he characterizes the Bedouin “martial-pietistic” Brotherhood (Ikhwan) of “the 1920s” “completely destroyed” by the first Saudi King in 1929 as “a forerunner of the Islamist network built by Pakistan’s ISI with Saudi and CIA funding along Pakistan’s border with Afghanistan” more than 50 years later (“in the 1980s”). He also uses the undifferentiated label “Muslim Brotherhood” (Ikhwan) to link those earlier Saudi Bedouins to “hundreds of Arab Muslim Brotherhood activists . . . from educated, middle class backgrounds . . . [in] the Middle East and North Africa” who fled to Saudi Arabia during the 1970s.

Further, although Mr. Tomsen initially infers that all Saudi Wahhabists, including those occupying the senior positions within the officially established clerical hierarchy and Saudi Government itself, support radical Muslim terrorists, he sometimes attributes that position to only “radical” Wahhabists or those who have “melded rigid Wahhabism with the Muslim Brotherhood philosophy of Sayyid Qutb” in a way that “strategically reinforced each other.” Such inconsistencies can easily confuse a non-specialist reader; are only “radical” or “rigid” Wahhabists” or all “Wahhabists” to blame.

And in what specific ways have Wahhabism and Qutbism “strategically reinforced each other” with respect to what specific objectives and actions planned? Mr. Tomsen does not explain nor does he direct the reader to information elsewhere that might help us answer such questions.

Ambassador Tomsen’s proposals for new American and NATO strategies toward Afghanistan might have been novel when he began writing this book more than three years ago. But they now look very much like the current policy of President Obama’s policy toward Afghanistan. That policy was articulated only nine days ago by his National Security Advisor Tom Donilon in an interview by Fareed Zakaria on CNN. Unfortunately, the view of many analysts who believe that policy will almost certainly fail also applies to Mr. Tomsen’s recommendations.

In conclusion, this lengthy manuscript might best have been published as two separate books.

The first and best of those books should have been the aforementioned personal memoir (Part III of the current book) in combination with Mr. Tomsen’s description of “the wars of Afghanistan during the fourteen-year Afghan Communist era” from 1978 to 1992 (Part II).

The second, less interesting, book could then have been limited to a substantially abbreviated version of Parts I and IV. Abbreviating the hypothetical second book could also have been made easier if all of the many redundancies were edited out. Indeed, much of Part IV of the current book has already been presented earlier by Mr. Tomsen in substantially more succinct and accessible ways; see any one of the following easily accessed on the web: (1) Mr. Tomsen’s “Response: A Chance for Peace in Afghanistan” published in Foreign Affairs (January/February 2000 (prior to 9/11); an interview by Ray Suarez on PBS’ “Newshour” on November 27, 2001 (soon after 9/11); another interview by PBS’ Frontline “Return of the Taliban” on August 10, 2006; or yet another interview by Take Part on May 12, 2011.