The Warrior State: Pakistan in the Contemporary World 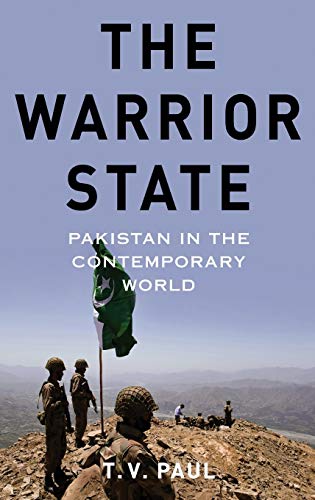 “The Warrior State is compelling, thought provoking, and extremely well written, without the wordiness and redundancy that seem to plague academic works . . .”

T. V. Paul’s The Warrior State is a key text for any reader who wishes to understand the political, military, and social dynamics behind one of this century’s principal powder kegs. This work also constitutes an enlightened and well-supported argument for change that ought to be digested and considered by leaders in Pakistan, as well as by decision makers in the U.S. and other nations that feed Pakistan’s dysfunctional patterns of behavior.

Pakistan should be doing better. Its strategic geographic position has generated huge volumes of aid from the U.S., China, and other donors. It has a well-developed military and is even ranked as the sixth nuclear power. Its neighbor, India, is making great economic strides.

Yet as Dr. Paul points out Pakistan is a “failing state.” It teeters on the edge of economic collapse and is beset by massive internal security threats. The Warrior State identifies the impediments to Pakistan’s development and stabilization and examines the historical causes of those impediments as well as the near-term and long-term consequences for both Pakistan and the world at large.

The central phenomenon that Dr. Paul identifies is Pakistan’s “geopolitical curse.” Its strategic geographic position, which appears to be a financial blessing, has instead become a detriment in much the same way that rich oil deposits have become a detriment to certain petro-nations in what Richard Auty called “the resource curse.”

Because Pakistan’s leaders are able to extract geopolitical “rents” from global powers, they have no impetus to develop trade, industry, or other sources of national income. Along the same line, because these rents often come without significant pressure for domestic reforms from the donor countries, they help maintain the power of the military class at the expense of civilian leadership and the population in general.

Other impediments that Dr. Paul examines are the “hyper-realpolitik” mindset of Pakistan’s elite and the perceived threat from India, both of which also serve the warrior state, perpetuating the power of the military over successive civilian governments. Dr. Paul also breaks down the sources and debilitating effects of Pakistan’s extreme form of political Islam. Then he completes his analysis by comparing Pakistan to other nations that began as warrior states but were somehow able to develop along relatively healthy lines, most notably South Korea and Turkey.

In his conclusion, Dr. Paul offers solutions that may prevent the Pakistani powder keg from destabilizing into what could be a world-changing mess. If not as detailed as a road map, they are at least steps that must be addressed by the leadership within Pakistan, as well as by those who are providing them with aid.

The Warrior State is compelling, thought provoking, and extremely well written, without the wordiness and redundancy that seem to plague academic works of late. Dr. Paul’s arguments are both structured and fluid, making them easy to digest. That is not to say that this text is “light reading,” but readers who are motivated to learn about the region will both enjoy it and benefit from it. Beyond casual or academic readers, though, the best audiences for this text are the leaders and decision makers who can enact reforms right now in Washington and especially in Islamabad. As Dr. Paul notes, “Ultimately, the choice for change should come from within Pakistan itself.”