The Warehouse: A Novel 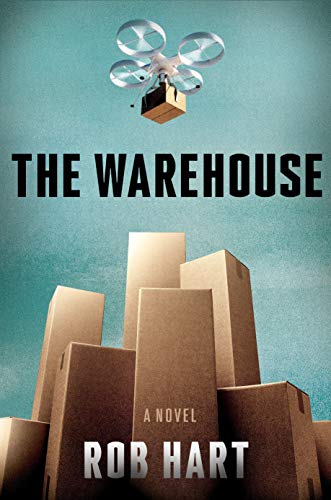 “The Warehouse reads as a treatise against the evils of big corporations and rampant capitalism.”

The Warehouse takes place inside a future corporate dystopia dominated by Cloud, a corporation so large and powerful it can throw off governmental restrictions and treat workers as cogs in its ruthlessly efficient capitalist machinery. Cloud is easily recognizable as a stand-in for Amazon, with rapid delivery of any item around the globe, mostly by quadcopter drone.

In the novel, however, Cloud has expanded so much that its employees live in dormitories on the warehouse grounds, complete with mall-style food and entertainment, where their every movement is tracked and rated on a five-star system. The overwork and mistreatment of employees is whitewashed with relentless propaganda in which employees are told how fortunate they are to work there.

The book follows two new employees, Zinnia and Paxton, strangers who begin a romantic relationship while discovering what it’s like to work for Cloud.

Zinnia’s story is somewhat implausible: She is a corporate spy, hired to discover Cloud’s secrets. Her background, never well explained, includes the ability to kill with her bare hands (not really a necessary skill for corporate espionage) and a history of violent and high-stakes jobs. She doesn’t know who has hired her, just that they have promised her millions in return for information. When her shadowy employer adds murder to the job, she barely blinks an eye. Her involvement with Paxton is purely mercenary, at least at first: she wants to use his access as a security guard to fulfill her contract.

Paxton is more believable; he was briefly the CEO of his own company, which he founded to sell an invention of his own, until Cloud put him out of business. With few employment options, he ends up working in security for the company that took his livelihood. He is passive, trusting, and easily manipulated, both by Zinnia and by his boss at Cloud. He longs for some kind of revenge but lacks the backbone to accomplish it.

The most subtle and interesting part of the novel is an occasional third point-of-view character: Gibson Wells, the immensely rich founder and owner of Cloud, who is dying of cancer and writing his farewells to the world. He seems to believe his own propaganda and thinks he has done tremendous good for the world, rebuilding more efficient cities, providing employment and happiness to millions, improving the environment, and doing away with all those regulations that just get in the way of progress. As he says: “We gave people jobs. We gave people affordable goods and health care. We’ve led the charge in cutting carbon emissions, developing standards and technology that will save this planet.” He’s not entirely wrong. And yet from the inside, his warehouse/cities are more like totalitarian sweatshops than the utopias he imagines them to be.

In the end, The Warehouse reads as a treatise against the evils of big corporations and rampant capitalism. It raises important questions about our future but offers few solutions. The best alternative to Cloud suggested in the book is, in the words of one character, “to pull this system down and smash it to pieces.” Perhaps the best lesson learned from this novel’s dire predictions is to consider how to prevent them from coming true in the first place.