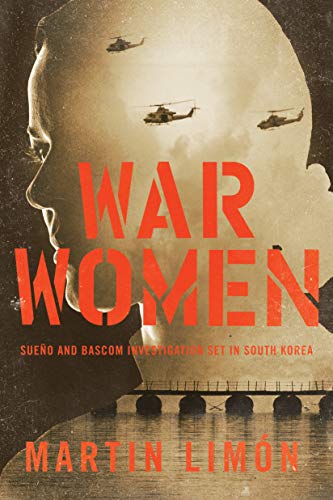 “War Women is another fine addition to a series that continues to entertain.”

This time, Katie Byrd’s on the trail of a story of repetitive sexual assaults conducted by American GIs against female soldiers in a transportation unit providing close support to combat troops. The women have rebelled, taking captive the commanding officer of the offending men, and they vow to protect themselves at all costs.

Meanwhile, Sergeant First Class Cecil B. Harvey, a.k.a. “Strange,” an occasional informant for Sueño and Bascom, has gotten himself knee-deep in a North Korean plot to disrupt an upcoming joint exercise between American and South Korean forces. Extricating Strange from a possible court-martial for leaking top-secret documents may be more than the two sergeants can manage this time around.

War Women is the 15th Sueño and Bascom novel by Martin Limón, a former military veteran who served 20 years in the US Army, including 10 years in Korea. Set in the 1970s, it provides a convincing picture of the country at a time when relations in the region were as complex and unstable as they are today.

Limón has brought back his usual cast of characters, including Katie Byrd and Strange; Gil Kwon-up, chief homicide inspector of the Korean National Police (a.k.a. Mr. Kill); Colonel Walter P. Brace, Provost Marshal of the 8th Army and Sueño and Bascom’s boss; and other reader favorites.

And once again he’s telling his story with his trademark comic tone. His prose is loose and relaxed, and the action reels across the page like a barrel full of monkeys rolling down a hill.

Sueño and Bascom are a Rowan-and-Martin comedy team turned loose on the South Korean landscape. Serious-minded Sueño narrates events in the first person while erratic Bascom plunges in and out of trouble as the fists fly and the knives flash.

Despite his light-hearted approach, Limón treats the story of the beleaguered war women with the seriousness it deserves. Their harassment is unrelenting and disgusting, and Limón presents it with an urgency that not only casts a shadow on the values of the day but also has relevance today.

As well, he offers a portrait of Korean society and culture that’s respectful and engaging. Sueño’s ability to read and speak passable Korean brings readers that much closer to the difficult situation in which American GIs and Korean natives must find a way to co-exist under less than ideal conditions.

It’s part of what this author does in each of his novels—find a successful balance between humor and powerful, thought-provoking subject matter.

Resolution of the myriad problems entangling the sergeants, Strange, Katie Byrd, and the war women all seem to be wrapped up rather unrealistically at the end of the story, however. Limón digs them deep fox holes, throws them in, then tosses down very convenient rope ladders at the end to get them back out again.

“Deus ex machina,” as Sueño himself puts it. It’s the only false note in an otherwise enjoyable novel.

War Women is another fine addition to a series that continues to entertain.