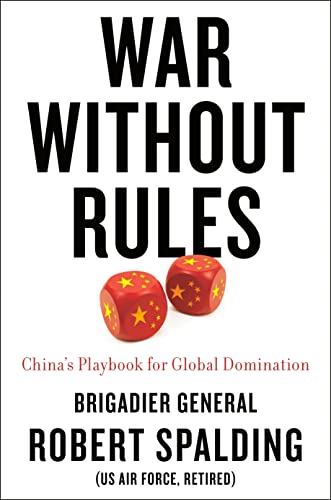 “Gen. Spalding describes Unrestricted Warfare, which has been used at China’s military academies and therefore approved by the political leadership of the Chinese Communist Party (CCP), as ‘the main blueprint for China’s efforts to unseat America as the world’s economic, political, and ideological leader.’”

“China is at WAR with the United States,” writes retired Air Force General Robert Spalding, who served as a China expert on the Joint Staff at the Pentagon, but “[w]e don’t realize it yet.” China is waging war, he explains in his new book War Without Rules, based on tactics and strategies set forth in an obscure book written in 1999 by two Chinese People Liberation Army (PLA) colonels entitled Unrestricted Warfare.

Gen. Spalding describes Unrestricted Warfare, which has been used at China’s military academies and therefore approved by the political leadership of the Chinese Communist Party (CCP), as “the main blueprint for China’s efforts to unseat America as the world’s economic, political, and ideological leader.” And, he writes, it is “the key to decoding China’s master plan for world domination.”

The two Chinese colonels, Qiao Liang and Wang Xiangsui, wrote the book at a time when the United States was enjoying its brief “unipolar moment,” having recently achieved victory over the Soviet Union in the Cold War and won a one-sided military victory in the First Persian Gulf War. And China had not yet attained economic and military superpower status.

As Spalding notes, “China in the early 1990s was still essentially a developing country with a largely rural economy and hundreds of millions of poor citizens. The remarkable rise of industrialization was underway, but China’s economy had far to go.” Unrestricted Warfare preached a new version of a very old Chinese formula for victory first set down in print thousands of years ago by Sun Tzu, who wrote that the acme of skill was to defeat an enemy without fighting.

The colonels, Spalding writes, “pulled together centuries of Chinese thinking about warfare and made it relevant in a modern context.” In each of the book’s chapters, Spalding presents excerpts from Unrestricted Warfare along with his interpretations and assessments of the text.

Unrestricted warfare, or what the Chinese authors call “beyond-limits warfare,” includes psychological, media, information, technology, cyber, financial, political, social, and espionage warfare. They refer to this as a “cocktail mixture of warfare,” and it is designed to wage war with non-military means. Such warfare aims to weaken the United States internally and to exploit our vulnerabilities.

Spalding points out that China’s version of unrestricted warfare may also include armed force, but the key elements are ostensibly non-lethal. It is, the colonels write, “warfare which transcends all boundaries and limits.” The battlefield is everywhere. And everything can be weaponized, including computers, drugs (fentanyl), financial markets, viruses (COVID-19), social media platforms, universities, scientific organizations, NGOs, trade, and media outlets.

And Spalding believes that China’s practice of unrestricted warfare lulled the United States into a false sense of security after the Cold War by convincing American elites that China was liberalizing politically and that Americans could benefit financially by “engaging” China rather than containing or confronting it. And a lot of American elites did (and still do) benefit financially from engagement with China.

China, after all, had helped the United States defeat the Soviet Union in the Cold War. And while US statesmen were right to play the “China card” against the Soviet Union, too many of them forgot Lord Palmerston’s dictum that nations have no permanent friends or enemies, only permanent interests. Spalding believes that in a sense China played the “American card” against a hostile Soviet Union—it was an alliance of convenience that ended with the end of the Cold War.

Unmentioned by Spalding is another factor that imperils US security—the gradual formation of a new Sino-Russian strategic partnership, which developed and expanded while the United States was distracted by wars in Afghanistan and Iraq. And China has also engaged in a massive military build-up and has extended its influence throughout the Indo-Pacific region via its Belt and Road Initiative. Unrestricted warfare also includes geopolitics.

Spalding believes that China, too, has vulnerabilities that the United States should seek to exploit, using our own version of unrestricted warfare. But first, he writes, we need to appreciate that we are at war with China, even if it is not yet (and hopefully never will be) a shooting war. His book is designed to help US statesmen and strategists to “know” the enemy better and to appreciate the enemy’s strategy. Will America listen?