The War Before the War: Fugitive Slaves and the Struggle for America's Soul from the Revolution to the Civil War 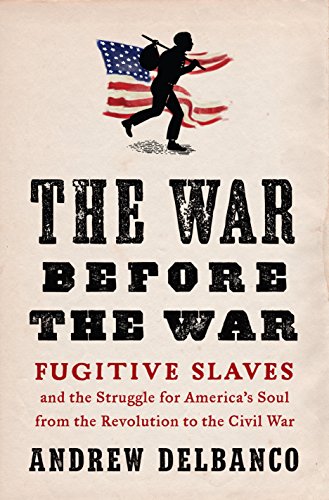 "The War Before the War is not an encyclopedia but a deep, scholarly, engrossing introduction to its subject that impacts us even today and in many ways."

Renowned historian Andrew Delblanco begins The War Before the War with "the United States was founded in an act of accommodation between two fundamentally different societies." Much of this book discusses the evolution of American slavery in terms of the Constitution and the real danger of disunion in 1850.

"In the former [the South] it [slavery] was visible everywhere and in the latter [the North] was visible almost nowhere." In time, in "one-half of the country slavery was basic to its way of life while in the other it was fading or already gone." Nationally, the slave-produced cotton became more than 60% of the annual exports of the United States.

The country had started falling apart long before 1860 because slaves "repeatedly risked their lives to flee their masters." The War with Mexico and the subsequent Compromise of 1850 opened a number of political crisis over slavery including the Fugitive Slave Act of 1850 that "turned out to be an incendiary event that that lit the fuse that led to civil war."

Between 1850 and 1860, "the North had achieved the requite economic and political unity to overwhelm the South—the freedom-killing law proved to be ultimately an advance towards freedom." The Fugitive Slave Law, however, also filled those intervening years with injustice and raised political partisanship to unprecedented toxic levels, making the Civil War inevitable.

"Everything about the Fugitive Slave Act favored the slave owners." A person accused had no allowed legal defense including "evidence of beatings, rape, or other forms of abuse while the defendant had been enslaved." Persons legally free from bondage (and sometimes "any human prey") could suffer kidnapping, and the slave catchers might murder resisters.

"For the millions of slaves still held in the South, the Fugitive Slave Act deepened the despair of the already desperate." It encouraged as never before black emigration to Africa, Canada, and the Caribbean. To illustrate the complexities of these issues, the author at least briefly outlines the basic and different views of the observers then and historians since.

Delblanco writes of this crisis as "what might be called the first Black Lives Matter movement" and about establishing America's first sanctuary cities. The author also adds states rights, a president elected by a minority popular vote, and even "opponents of gun-control laws today" to the mix. John Randolph raised the issue of the War Powers Act in the early 1800s, as part of the slavery debate.

The Fugitive Slave Act also began the end of slavery. Delblanco writes that through the resulting Civil War's self-emancipation, "some four million black Americans" "entered a limbo between the privations of their past and the future promise of American life—a transition that remains far from complete."

Delblanco asks how men like Millard Fillmore and Abraham Lincoln who despised slavery "countenance such an odious law?" The War before the War takes the reader to "beyond a world where the line between good and evil is sharp and bright" and where some public figures "risked their reputations and sometimes their lives in response."

Delblanco offers a too rare discussion of the important literature of the fugitive slave "weapons in a war just begun" and "truncated stories of impossibly virtuous behavior." They serve as "more than propaganda but less than literature."

Fugitive slaves relate to the modern debate over immigrants. It "recurs in one form or another whenever people must decide whether to submit to an unjust law or resist it." The last chapters of the book tells of the most famous incidents from the implication of the Fugitive Slave Law to its demise during the Civil War.

Delblanco stays concise to his subject. The War Before the War is not an encyclopedia but a deep, scholarly, engrossing introduction to its subject that impacts us even today and in many ways. The book has documentation and illustrations.