War Time: An Idea, Its History, Its Consequences 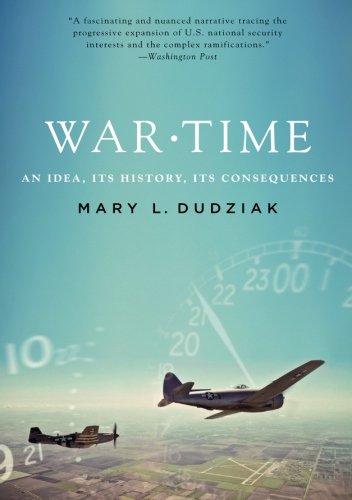 “. . . some readers will no doubt dismiss some of the author’s statements as hyperbole or perceive a pacifist bias. But those distractions are few and far between. Ms. Dudziak acknowledges that ‘demystifying the idea of wartime, and revealing how it works in American culture, will not end any wars or even get Americans to care more about it, . . . [But] it might offer a path toward a more satisfactory understanding of the relationship between war and American democracy.’” For that reason alone, this is a book well worth reading.”

Oxford University Press’ publicity release for the new book War Time: An Idea, Its History, Its Consequences by Mary Dudziak presents the author’s underlying questions accurately and succinctly: “Why do we think of war as temporary when instead it goes on and on? Since the new ‘normal’ is wartime, why do we allow our civil liberties to continue to be sacrificed—and will we ever get them back?”

Ms. Dudziak’s answer to those questions is that a failure to recalibrate our thinking about what must be accepted during times of “war” poses a threat to Americans’ civil liberties. That argument is presented in a slim book with a big message.

Four related themes are consistently woven throughout the book’s Introduction, four chapters, and Conclusion: how we think about the nature of contemporary wars; how we view ourselves, our government, and our country’s unique political norms and values; the affect of wars on our thinking about constitutionally guaranteed civil rights; and the growth of a “national security state” and the growing acceptance of “preemptive wars.”

The temporary suspension of selected civil liberties during times of war and the restoration of those liberties following military victory at the end of war is a long-standing storyline in the literature on law, politics, and the use of military force. But Ms. Dudziak argues that this storyline does not accurately reflect United States’ experience since at least the end of World War II. Instead, United States’ military forces have been actively engaged, either directly or indirectly, in a continuous string of international or insurgent military conflicts.

Even a partial list of American military involvements, either directly or through military advisory groups ranges from the Hukbalahap insurgency in The Philippines (normally thought to have begun about 1946) through, at one time or another, Viet Nam, the Dominican Republic, Grenada, Korea, Lebanon, and Panama, among yet others in southern Europe, Latin America, Asia, and the Horn of Africa, to more recently Somalia, Afghanistan, Iraq, and Yemen.

This book is not so much about those “wars” as it is about the concept of “wartime.” It is worth quoting Ms. Dudziak at length here:

“Once we enter [wartime] we expect the rules to change. Some burdens are more tolerable because we think of war as important and exceptional, and also because, by definition, wartime comes to an end. . . . [But] Once war has begun, time is thought to proceed on a different plane. There are two important consequences of this shift: first, we have entered a time that calls for extraordinary action, and second, we share a belief that this moment will end decisively, so that this shift is temporary. Because of this, built into the idea of wartime is a conception of the future. . . .

“In wartime thinking, the future is a place beyond war, a time when exceptional measures can be put to rest, and regular life resumed. The future is, in essence, the return to a time that war had suspended.”

But since the emergence of the strategic competition between the Soviet Union and United States following World War II, “small wars” have essentially been viewed as “battles” within an overarching, and continuing, Cold War or War on Terrorism. There is a disconnect between the waging of continuous war and justifications for limiting civil liberties on the grounds that they are only temporary responses to immediate threats. This is how we end up with her warning that the reality of continuous warfare poses a threat to Americans’ core political values over the long term.

Ms. Dudziak creatively identifies a variety of indicators—for example, eligibility criteria for combat service medals and criteria for membership in various American veterans’ organizations—that well illustrate that there is little agreement about when American wars have begun and ended. Many American readers will not have given much thought to how our culture influences the way we think about the beginning and ending of our country’s wars; however, as they read through Ms. Dudziak’s provocative argument, recent examples will almost certainly come to mind.

For example, our withdrawal of our troops from Iraq does not signify an end to America’s current period of wartime. Yet the “end of the Iraq War” or, alternatively, our wars in Iraq has been celebrated at least four, and arguably five, different times: first at the end of “Operation Desert Storm” in 1991 and then again twice within four months of each other in 2012; the first during August followed yet again in December. The “ending” of those Iraq “wars” were each trumpeted by the American Government and its mass media even as constitutional issues about habeus corpus, rights to a speedy trial, and so forth are still under dispute.

This book has only a few minor flaws. Ms. Dudziak’s narrative sometimes shifts between generalist and academic specialist modes. Readers can skip the two pages devoted to a discussion of “Carl Schmitt, a leading German political theorist who became a member of the Nazi Party in the 1930s” and his views about “exceptional moments [when] . . . the sovereign [can declare] emergency powers.”

And some readers will no doubt dismiss some of the author’s statements as hyperbole or perceive a pacifist bias. But those distractions are few and far between.

Ms. Dudziak acknowledges that “demystifying the idea of wartime, and revealing how it works in American culture, will not end any wars or even get Americans to care more about it, . . . [But] it might offer a path toward a more satisfactory understanding of the relationship between war and American democracy.” For that reason alone, this is a book well worth reading.