War of Shadows: Codebreakers, Spies, and the Secret Struggle to Drive the Nazis from the Middle East 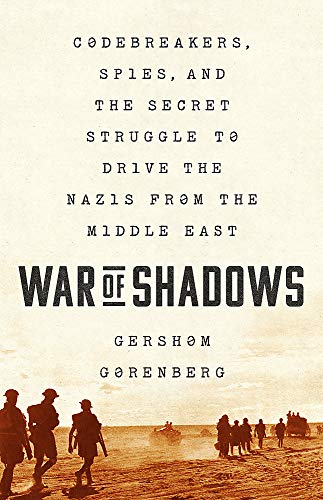 “should be required reading for anyone wanting to learn intelligence gathering.”

Gershom Gorenberg made “a journey that lasted years” to learn the truth of intelligence in World War II North Africa prior to the German defeat at El Alamein in the summer of 1942. The author had “countless long days and nights spent fitting together the recently declassified or long-lost or long-secret documents of one country with espionage reports of another.”

Gorenberg effectively tells this history through secret dispatches, memories, and personal correspondence. Some of this material was classified for 70 years.

Those campaigns could have turned out differently and changed the outcome of the war. Often the code breakers only had access to encrypted messages for a couple of days. Exhaustion and nervous breakdowns for British codebreakers were “a Bletchley Park form of war wound.”

War of Shadows begins in the summer of 1942 with Cairo in panic from a feared arrival of Erwin Rommel’s Panzer Army Africa at any moment. British “soldiers were burning papers and the train station was mobbed.” Rommel’s troops were advancing on British supplies abandoned on the battlefields.

British authorities had sidelined Egypt’s king and its people without regard to the Treaty of 1936 that guaranteed Egypt’s sovereignty. At that time, Egypt’s usually desperately hungry population faced mass starvation. Egypt, Iraq, and Palestine had German supported resistance movements. Britain had to invade Iran, Lebanon, and Syria.

Anti-Semitism is also part of the story. The Royal Navy would not share information with the army’s Jewish code breakers. Gorenberg writes of generals “worrying about Jewish rebels in the future than about an Axis invasion much sooner.”

The British had to find somewhere to evacuate Egypt’s Jews other than Palestine where they might choose to start and create their own nation. One general was dismissed for cooperating too much with the Jews in Palestine.

Bletchley Park decoded the codes of nations other than just Germany—allies and neutral—to learn deliberations on such issues as accepting Jewish refugees. The British kept secret from the United States that the Germans read American coded dispatches because that would have exposed that the British did it even faster.

This book should be required reading for anyone wanting to learn intelligence gathering. The author, for example, points out that the Germans made mistakes but “the Germans were not stupid. . .  . they were human.” “Every time they [the Germans] looked at it [the Enigma encryption machine] they [wrongly] saw it was impregnable.” “If the Germans ever found out that Enigma was being read, all they had to do to foil the British was to be more careful.”

British intelligence also made its share of errors. The author writes, for example, of how security was so lax at the British embassy in Rome in 1939 that the Italians “found safecracking was quicker” than decoding.

Often one side risked losing everything by diverting forces to other theaters such as Greece, Malaysia, or Russia, itself critical secret information. News on the on again, off again invasion of Malta was critical to the British.

War of Shadows has many timeless insights such as codebreaking “requires holding a huge amount of information in your head, and extraordinary reasoning ability, and something beyond reason.” Each side feared that intercepted dispatches would reveal how they read the enemy’s communications. They searched for clues in dispatches of the identity of spies.

Even the best sources “only have value if commanders and high officials know about them and trust their authenticity.” Hard earned intelligence serves no purpose if used badly as with the British at Tobruk. It also means little if nothing can be done to change the outcome as with Crete.

This work is far more than a book on espionage in World War II, however. Even the “outworldly conditions of deserts” is a subject. In “the 1920s much of the desert was blank spaces on maps.” Even dunes and drifting sand went unexplored until Ralph Bagnold’s book in 1939. Heat, insects, roads, and wind became factors.

In the little-known environment of North Africa, World War II was fought by colorful characters using experimental technology and unproven tactics. It is a saga of the enigma machine, MI6, Italy in North Africa, Erwin Rommel, the United States, and so much more told in segments.

“Beneath each well-known piece of history is another story that was preserved in long secret documents or in papers men brought home,” and “the memories of people who only knew part of what happened or who misheard what were anyway rumors.” “Memory can shuffle dates, or squeeze several tumultuous days into a single hour.”

Gorenberg is one of many modern scholars who challenge “the countless accounts” “that unintentionally celebrated the wrong people as heroes, or that intentionally did so.” “What has been told so many times that is bright and definite and unambiguous may be a coded message from the past, meaning something else waiting to be deciphered.”

War of Shadows is a fast and gripping read. Gorenberg, however, writes in a style of telling stories and then using each to illustrate the greater background. That method is entertaining reading for individual chapters but can come across as confusing and disjointed.

The book starts with a useful “Cast of Characters” list that includes explanations for organizational abbreviations. It also has acknowledgements by the author as a guide to his research as well as a valuable bibliography and extensive annotation.