The War on Sex 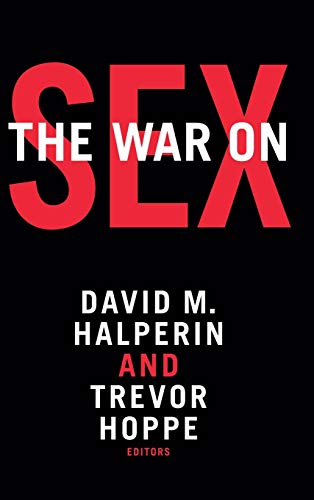 “The book is a roadmap to where the ‘immoral’ crosses the line to the ‘illegal,’ a boundary not fixed, but a terrain of social struggle that shifts over time.”

There has been a war on sex since the nation was first occupied by European settlers four centuries ago. In New Amsterdam, the first harlot is reputed to have been Griet or Grietje (“Little Pearl”) Reyniers. She arrived around 1626, unashamed of her sexual proclivities. Respectable citizens repeatedly assailed her, but she thumbed her nose at them, insisting, “I have long been the whore of the nobility, now I want to be the rabble’s whore.” The good citizens expelled her to the newly settled outpost in Gravesend, Breuckelen (now Brooklyn).

However, the gravest sin was being charged with witchcraft, and over 200 people were so accused. And the most shameful sin a witch could commit was engaging in the unholy deed of having sex with the devil. About 30 people, mostly elder women, were convicted of sexual congress with Satan and executed.

The War on Sex, edited by David M. Halperin (University of Michigan) and Trevor Hoppe (SUNY Albany), is a collection of scholarly articles that examine not the overall war on sex (e.g. abortion, gay rights, transgender issues, or witches), but fierce skirmishes at the periphery of today’s struggles over sexual culture. The book is a roadmap to where the “immoral” crosses the line to the “illegal,” a boundary not fixed, but a terrain of social struggle that shifts over time.

The editors have done a valuable service putting together these 17 rigorous pieces that, collectively, paint a grim picture of the nation’s sexual culture. There are simply too many excellent contributions, well researched and rigorously analyzed, to identify all the contributors. It’s a valuable book meant for an academic audience, a useful resource for one’s bookcase to draw upon when considering a truly troubling dimension of sex and contemporary life: the criminalization of sex.

Halperin offers an opening chapter framing of the book’s rather narrow—but invaluable—focus. He argues that there is a “tendency to punish sexual crimes much more harshly that other serious crimes, even the most destructive and violent crimes.” He warns, as do other contributors, that the current criminal “war on sex” developed in parallel to the “war on drugs.” Both have been woeful failures, miscarriages of justice. All too many men (and some women)—blacks for drugs, whites for sex—have suffered.

One of the many who suffered due to a miscarriage of justice that plagues the “sex crime” battlefield is Willy Campbell. He is a HIV+ gay man who was sentenced to a 35-year prison term in Texas for spitting on a police officer, although his saliva was proven not to contain the virus.

Jeffrey Haynes of Battle Creek, MI, was not mentioned in the book. In 2006, he was arrested for bestiality, sexually assaulting two sheep, Thelma and Louise. Under pressure from animal rights advocates, he was sentenced to 2-1/2 to 20 years of confinement and was added to the state sex-offender registry.

The criminal justice system is imperfect, as much due to the laws as on the whims of the arresting officer, aggressive prosecutors, accommodating judges, and opportunistic media hype. In 1997, the Supreme Court ruled in Kansas v. Hendricks that civil confinement of sex offenders was Constitutional; today, some 5,000 individuals—often identified as Sexually Violent Predators (SVP)—are confined to indefinite detention with few legal rights of appeal. As of March 2016, there were about 850,000 men, women, and children (as young as eight and ten in some states) listed on various U.S. state and territory sex-crime registries.

As scholars, lawyers, and writers, the contributors know their respective subject matter and are not afraid to have a point of view. Collectively, they point an accusing finger at those they hold responsible for the growing “carceral”—they’re academics—system of jurisprudence, from lawmakers, to judges, to prisons, to the cop on the beat and to the growing intelligence infrastructure that glues them all together.

The complex system took shape over the last quarter century. Who is responsible for its development? Clearly, the conservative Christian right and its legislative handmaids in the Republican Party are at the top of the list. They are supported by a legal system, including the Supreme Court, that equates “sex” with “morality,” and a law-enforcement apparatus that unjustly implements anti-sex laws and regulations to mark the boundaries of acceptable sex.

Most unexpected, and intellectually refreshing, many of the book’s contributors point an accusing finger at two unlikely developments that legitimized the “war” on those accused of sex crimes. First, the “victim’s rights” movement gained a voice in judicial deliberations and championed the most punitive sentences.

Second, more mainstream liberals, reformist feminists, and gay rights advocates failed to seriously consider the issue of criminalization of sex. Together, these forces contributed to the abandonment of a key Constitutional protection for those accused of sex crimes, the Ninth Amendment that guarantees protections not elsewhere enumerated, notably personal sexual freedom.

The current round of the culture wars was launched in 1972 when Phyllis Schlafly led a successful campaigned to defeat the Equal Rights Amendment. A key aspect of the culture war is the “war on sex.” Over the last four decades, the battle lines in the war on sex have shifted and much of what was once considered immoral, perverse and/or illegal has been normalized. Real sex crimes, like rape, pedophilia and sex trafficking have been reclassified, with the legal and law-enforcement definitions expanding to both minimize the meaning of real crimes and expanding the meaning to include often innocent and voluntary engagements.

The War on Sex paints a critical picture of one of the most under-discussed topics on social life: the criminalization of sex. Popular considerations of the analyses presented would be very helpful as the Trump administration relaunches the culture wars. To do this, the collection would benefit by providing two critical dimensions, framing devices.

First, it needs to provide an historical context for today’s “sex wars.” Various contributors refer to earlier sex “panics,” but uninformed, non-academic readers would have no sense that America has been a cauldron of conflict over sexuality—its experience and expression—since the nation’s founding. Shifting conflict over sex has accompanied every phase of U.S. socioeconomic development.

Second, the introduction should do more to “contextualize” of the sex crimes considered and the wide scope of sex-related battles being fought today. The commercial sex industry is a $50 billion enterprise; premarital sex is unquestioned; and smart, safe sex is now a teen rite of passage from youth to adulthood (and the teen birth-rate is at an historical low).

Four centuries ago, sex with Satan was considered the most horrendous and immoral crime, casting one a witch to be executed; today, as The War on Sex reveals, identifying someone as a sex criminal, especially a violent predator, marks the person a 21st century witch, one to be imprisoned for life, if not worse.