War at Sea: A Shipwrecked History from Antiquity to the Twentieth Century 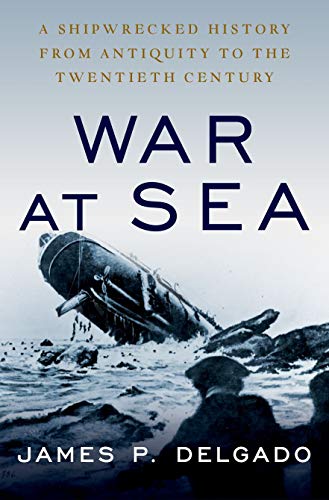 "Delgado writes as high adventure . . . a clear and entertaining narrative but [one that] also makes profound observations on what war on water means."

"By far the greatest number of preserved historic ships in the world's museums are warships." The sea holds many, many more. It is a "powerful subject rich in history, imagery, and emotion." James A. Delgado, host of The Sea Hunters, has explored the greatest historical shipwrecks uncovered so far.

The author intends his new work War at Sea as more than an update of his Lost Warships (1999) that he "intended for a wider audience of divers, students of the past, and those interested in the saga of war at sea." "It was neither full of the technical specifications for these ships, nor a blow-by-blow accounting of sea battles." Both books combine archaeology, history, and storytelling.

War at Sea chronicles the history of warships through their wrecks from the "exponential growth in the number of warship discoveries" in the last two decades. The book covers "amazing new developments." Hundreds of new sites have turned up, including the Titanic, the Monitor, and the Hunley. Only the story of the fleet of Kublai Khan appears in both books.

War at Sea opens with a summary of the many ways ship archaeology benefits historical research in general. Interesting facts turn up, such as 650 battleships were built since the mid-1800s, "designed for ship to ship sea battles" "but only 16 were sunk as a result of this type of action."

In this context, Delgado especially notes the propensity of humans "to use violence as a means to an end." To that, he adds, to the fanatics, Patriots, and soldiers of the sea, warships also had as crews men "who go to fight and die" only because "they were caught up in something bigger than themselves, and events over which they as individuals had no choice."

Findings on the wreck of the Lossen (1686–1717) of the almost 400-year Balkan wars, for example, imply that the crew did not wear uniforms but did sleep in hammocks instead of on the deck. Its crew "smoked pipes, took snuff, and carved wood," including a child's rattle. Exploration of the American Revolution Defense turned up "shoes, belt buckles, and clothes," as well as the tags tied to the ship's meat supplies.

War at Sea includes wrecks "of the last generation to fight an extended war at sea" (World War II) as the last of that generation passes away. It also highlights how these archaeological treasures "are trawled away as fishing grounds" and "artifacts are stolen off the sea beds by modern scavengers," indifferent to historical value and "these wrecks as graves."

The author tells this epic as practical history with an archaeology based introductory historical narrative. Delgado writes as high adventure, a book in which the reader can enjoy it just flipping through the pages. He writes a clear and entertaining narrative but also makes profound observations on what war on water means.

The earliest vessels found, "log boats and canoes," go back some 10,000 years but so does the "earliest evidence of larger-scale human warfare." Ancient history at sea left little record beyond art and wrecks. No one knows who had the first fleets for trade or war.

"Ancient war afloat," however, "was close, personal, and nasty," even when using rams. Rome developed a number of different warships with a variety of weapons, including stealth vessels (without highly visible sails). Mongol China failed in invading Japan, Java, and Vietnam because "it never realized the full potential of naval power." It took the Muslims 700 years to take Byzantium because of the failures and successes of sea power.

Europeans built larger and more powerful ships on the Viking model. The Spanish Armada using boarding tactics lost against English ships that relied on firepower, although boarding remained a common tactic for centuries.

Such ships recovered in modern times tell the story of the Golden Age of Discovery, including significant finds in America. Vessels evolved, over centuries, into the modern warships that do not even see each other in battle. War at sea over the centuries thus became as impersonal as land warfare.

War at Sea does not have annotation, but it does include a solid bibliography. It has many illustrations and relevant maps.