The War That Made the Roman Empire: Antony, Cleopatra, and Octavian at Actium 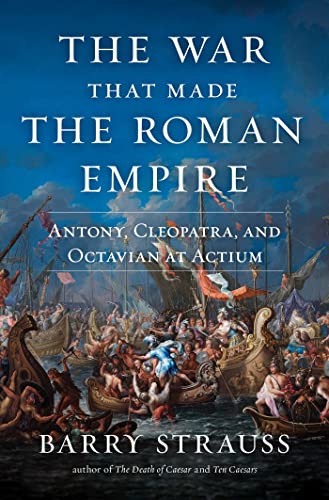 “a careful and splendidly written narrative that separates known facts from long-believed myths and outright falsehoods about events leading up to the battle, the battle itself, and its aftermath.”

One of contemporary America’s greatest chroniclers of ancient military history, Cornell University’s Barry Strauss, has written a masterful narrative of the naval battle at Actium that ended Rome’s civil wars fought in the wake of the murder of Julius Caesar and set the stage for the transformation of Rome from a republic to an empire.

Strauss, who has authored or co-authored more than a dozen books on the wars and battles of the ancients, has delved deeply into the source material for Actium and its principal protagonists: Mark Antony, Cleopatra, and Octavian. He has written a careful and splendidly written narrative that separates known facts from long-believed myths and outright falsehoods about events leading up to the battle, the battle itself, and its aftermath.

He calls the struggle between Octavian and Antony/Cleopatra a “hinge of history.” Its outcome determined whether the “center of gravity” of the empire would be in Rome or further east in Alexandria. Actium was the climactic battle in a six-month conflict that combined “armed violence, . . . diplomacy, political maneuvering, information warfare, economic pressure—and sex.”

The roots of the conflict reached back to Caesar’s assassination in 44 BCE. After his murder, Strauss writes, politics in Rome “coalesced around Antony and Octavian.” Antony was one of Caesar’s trusted field generals who believed he had earned the right to succeed his murdered leader. Octavian was much younger, but was a better, shrewder, and more ruthless politician than Antony. Octavian, Strauss writes, was “tenacious, cunning, and brave, with an iron will.” And Caesar had chosen Octavian as his heir.

In 43 BCE, Strauss notes, Antony and Octavian “agreed to govern Rome jointly . . . and to divide control of legions and provinces.” Antony governed in the east, using Athens as a base, while Octavian ruled in Rome. Antony and Egypt’s queen Cleopatra became lovers (she had previously been Caesar’s lover). Strauss describes Cleopatra as an able administrator, brave and skillful in the realm of politics.

While Octavian fought against Caesar’s enemies in the west, Antony formed an alliance with Cleopatra in the east. Octavian feared that Antony’s alliance with Egypt could result in a concentration of wealth and power that could overwhelm Octavian’s forces, so he prepared for war.

Strauss compellingly lays out the geopoltics of the battle, providing useful maps and expert analysis. Actium is on the west coast of Greece, which Strauss notes was “one of the most strategic waterways in the Mediterranean.” The key sea lanes, islands, and harbors were all located on the eastern shores of the Adriatic and Ionian Seas. “Whoever controlled that coast in ancient times,” Strauss explains, “held in his hands the fate not just of Greece but also of Italy.”

Antony had two tactical options: invade Italy or wait on the defensive for Octavian to attack in western Greece. He and Cleopatra chose the latter. Octavian’s naval forces, led by Agrippa, seized the initiative and took Methone, Antony’s key supply base in March 31 BCE. Strauss describes this move as “a military coup of the highest order--as daring and risky as George Washington’s crossing the Delaware or Japan’s surprise attack on Pearl Harbor.” Methone was Antony’s most important link in his logistical supply chain that reached southeast to Alexandria. Agrippa’s bold move would starve Antony’s troops of food and supplies.

Antony never recovered from the loss of Methone. In the late spring of 31 BCE, Octavian’s naval forces crossed over from Italy and reached the Adriatic Sea’s east shore. Strauss describes in detail the two sides’ battle fleets that would soon confront each other at Actium. Antony had greater numbers, but Octavian had better quality troops.

Actium is a promontory that overlooks and guards the entrance to the Gulf of Ambracia. Strauss describes the topography and its relevance to the battle. The actual naval campaign was fought during late August-early September of 31 BCE. Agrippa’s ships won victories at sea, cut Antony’s supply chain, and besieged Antony’s remaining forces. Antony’s eastern allies defected, and his troops were “hungry, disease ridden, short-handed, and demoralized.”

The last “fateful clash” occurred on September 2nd. Geography and wind played roles in the climactic battle. Strauss describes the sounds of the naval clash: “the shouts of the rowers, the loud cries of the helmsmen, . . . the exhortation of the generals, . . . the twang of arrows, the hissing of javelins, the detonation of catapults, . . . the whoosh of stones in the air and the crash of their landing.” There was ramming and deck fighting.

Antony and Cleopatra sensed defeat and looked to escape. In all, between 70 and 80 of their warships managed to get away, but their remaining fleet was subjected to “blazing missiles, hurled spears with torches attached to them,” and catapults that shot flaming pots. Death, Strauss writes, came by “various unpleasant ways: by the flames, by smoke inhalation, by enemy arrows, . . . or by drowning.” It was by all accounts, he writes, “a ghastly scene.”

Then Octavian moved on Alexandria, Egypt’s capital where Antony and Cleopatra waited. Octavian’s victory in Egypt led to both Antony and Cleopatra committing suicide. Rome’s civil wars were over. The republic, however, became an empire ruled by a single man who now called himself Caesar Augustus, who made Rome the envy of the world.