The War of Jenkins' Ear: The Forgotten War for North and South America and the World that Made It: 1739–1742 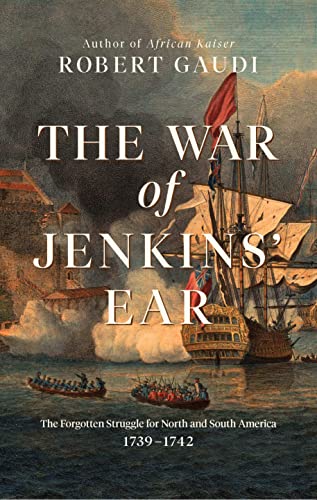 “Gaudi tells the story of the war and its principal antagonists with verve, erudition, and page-turning detail.”

The best writers of history tell a compelling narrative of events and place those events into a broader historical context. That is what Robert Gaudi has done with The War of Jenkins’ Ear, a little remembered conflict between Great Britain and Spain that was part of a centuries-long struggle between Europe’s great powers for control of the Western Hemisphere.

Gaudi tells the story of the war and its principal antagonists with verve, erudition, and page-turning detail. He begins with the incident that gave the war its name. On April 9, 1731, British Captain Robert Jenkins in command of the Rebecca, a trading brig operating in waters near Havana, Cuba, was subjected to a forcible seizure and search by a Spanish sloop. After ransacking the Rebecca, Spanish Captain Juan de Leon Fandino mistreated the British crew, including hacking off one of Captain Jenkins’ ears.

The incident, Gaudi writes, was one of many abuses inflicted by Spain against British ships and seamen in the West Indies, which Spain claimed as her own. The incident was largely forgotten until 1739 when Britain went to war against Spain.

The immediate cause of the war was the so-called “Depredations Crisis” that included the severing of Jenkins’ ear and other similar abuses. But Gaudi notes that the real causes of the war included disputes over trade (including the slave trade) and smuggling, corruption at high levels in both countries (involving the infamous South Sea Company), and fundamentally a struggle for power among Europe’s great powers in North and South America.

The War of Jenkins’ Ear and the broader European struggle took place during what the great British geopolitical thinker Sir Halford Mackinder called the “Columbian epoch,” the age of exploration and colonization that brought Europe’s quarrels to the New World. Gaudi notes that the War of Jenkins’ Ear grew out of the 1713 Treaty of Utrecht that ended the War of Spanish Succession, and subsequent smaller wars and treaties of the early 18th century.

It was a popular war in Britain whose public was treated to bellicose propaganda by the British press—what Gaudi calls “eighteenth-century ‘fake news.’” And Gaudi calls the War of Jenkins’ Ear the first “world war” because British and Spanish warships, soldiers, and sailors “crossed the Atlantic to the West Indies, . . . sailed around Cape Horn and into the Pacific all the way to the coast of China and on around the globe . . .”

Gaudi notes that Britain’s government in 1739, led by Robert Walpole, sought to preserve the peace and downplayed Spanish atrocities, even to the extent of trying to censor the press. Spain meanwhile was governed by what Gaudi calls “a quartet of hard-liners” known as the Gang of Four. The two sides negotiated over the “Depredations Crisis” but to no avail. War was declared on October 19, 1739.

The war lasted for three years, and in the end Great Britain lost despite some instances of heroic leadership by Vice-Admiral Edward Vernon, Commodore George Anson, James Oglethorpe (the founder of the American colony of Georgia), and an American captain named Lawrence Washington (the older brother of George). On the Spanish side, in one of the key battles at Cartagena (present day Colombia), Admiral Don Blas de Lezo y Olavarrieta, who had lost an eye, leg and arm in previous wars, bested Vernon and the British.

In the West Indies, disease killed more soldiers and sailors than combat did. The conditions aboard ships and on land in the tropics during the rainy season were atrocious. Medical treatment was almost nonexistent. Naval voyages were hazardous, especially traveling around Cape Horn where storms sometimes tossed ships around like toy boats.

The last British offensives in the war—at Santiago, Cuba, and Panama—came to an inglorious end in late 1741. “Britain had not only squandered thousands of lives and hundreds of thousands in treasure in a fruitless attempt to dislodge the Spanish from their strong places in the West Indies,” Gaudi writes, “it had squandered an opportunity history would not again afford—to plant an English seed on the rich soil of the South American continent.”

A subsequent Spanish invasion of Georgia also failed, but by that time the War of Jenkins’ Ear had, in Gaudi’s words, bled into the larger War of Austrian Succession, that involved Britain, Spain, France, Prussia, Austria, Saxony, and Savoy.

In the book’s epilogue, Gaudi notes that Jenkins ended up serving as acting governor on the island of St. Helena (where Napoleon would be exiled to and die after Waterloo); Fandino was captured by a British ship and was either executed or tried and imprisoned (“the waters of history have closed over Fandino’s head,” Gaudi writes); Walpole lost power due to Britain’s defeat in the war after serving essentially as Britain’s Prime Minister for 20 years; Vernon was mostly treated as the hero he was and died in 1785; and Lawrence Washington later named the property he owned along the Potomac (Mt. Vernon) after the admiral he so admired.

The great powers of Europe continued to fight for control of North America, though the key belligerents thereafter were Britain and France, with Spain playing a subsidiary role. And, ironically, after Britain mostly succeeded in ending French and Spanish claims to North America during the rest of the 18th century, it would be France and Spain that helped the American colonies defeat the British and gain their independence.