The War for Gaul: A New Translation 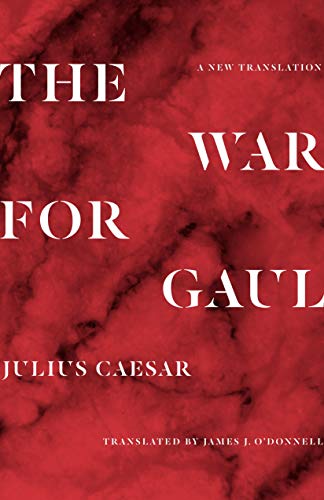 "this modern commentary on the Commentaries also 'lets you see Caesar the man and politician, not just the general he wanted you to see.'"

James O'Donnell opens his The War for Gaul by stating that no one compares to Julius Gaius Caesar but Alexander the Great. "Command, conquest, and a lasting legacy" separate them "from the mere strivers like Napoleon or Hitler."

Even for the brutal times of Caesar, the general came, saw, and conquered with no excuses, "though people die in droves, horribly on those pages." He had "something to prove, a career to make, and plunder to be harvested." The resulting campaign of "bullying allies and brutalizing the resistant" across today's France and adjoining lands kept Gaul under Roman domination for 500 years.

The blame and the consequences all fall on Caesar. "He went far beyond every reasonable moral or legal boundary." The greater struggle to replace the Roman Republic with an empire put him "in competition with two other monsters," Crassus who dies in modern Iraq and Caesar's former son-in-law Pompey the Great, whose ability and luck could not save him from Caesar.

O'Donnell writes "the book Caesar wrote is magnificent: amoral, certainly, but clear, vivid, and dramatic, a thing to be remembered and read for the ages." "This one forces us to be Romans of the kind its author wanted to be" without sympathy "with the wretchedness of the victims." Caesar did set out "to tell a good story, his story, his way, and to do so in a distinctive and peculiarly potent style." McDonald "tried to emulate him" in the translation.

The author argues, "for not teaching this book to the young," however, as "it gets war exactly right and morals exactly wrong," a fair appraisal for the whole of the fascist Roman mindset. Historical events become the text commented upon, with prologue, beginning, events, and conclusion.

The only excuse Caesar offered for this "bad man's book about his own bad deeds" is that he brought civilization to barbarians, a lie used throughout history for murder and plunder. Some people believe "empires are intrinsically good things when they are demonstrably not." "The bloody, ruthless work of making one remains inexcusable."

The Commentaries are the thoughts/annotation of the historical events by Caesar. "When we read it, we are meant to think we are getting the plain facts, direct and unvarnished." "Meant to look simple and seduce," this propaganda vehicle draws in "brave and attentive readers, ready to march twenty-five miles a day under full pack and be ready for more tomorrow."

O'Donnell calls Caesar's Commentaries "a great work of literature, one of the greatest" but this modern commentary on the Commentaries also "lets you see Caesar the man and politician, not just the general he wanted you to see." McDonald explains the economics, loan sharking, personalities, and politicians.

The book has no illustrations or maps. It does include helpful but brief appendices about chronology, sources, and terms. The War for Gaul has annotation.