War Comes to Garmser: Thirty Years of Conflict on the Afghan Frontier 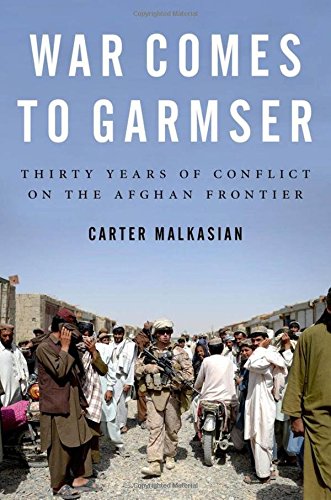 Now that the United States and its NATO partners have shifted to the end game in Afghanistan, there is little doubt that in the years and decades to come a significant body of published work will continue to grow, adding to already substantial shelves of books on the subject.

Understandably, historians will seek to recount the wars in Iraq and Afghanistan individually, but they will certainly research how these wars impacted the wider region, particularly colonial fabrications such as Syria and others.

In the case of Afghanistan, War Comes to Garmser is a welcome addition for those seeking a clearer understanding of how the United States came to what is arguably a predicament in its longest war.

Dr. Carter Malkasian focuses his new book on a single district, Garmser, in Helmand Province of southern Afghanistan. He opts to not delve into his personal experiences but rather utilizes Garmser District as a portal to the history of war in Afghanistan from 1979 to 2012.

Through 12 chapters, he chronologically and cogently recounts the district's political-military history; notable efforts include clear explanations of complex tribal relations and their relevance to the district's history as it evolved from 1979 to 2012. Usefully, the book's primary intent is indicated early:

"This book looks at why conflict lasted for such a long period, particularly focusing on how the Taliban movement formed in Garmser; how, after being routed in 2001, they returned stronger than ever in 2006; and how Afghans, British, and Americans fought against them between 2006 and 2012. In other words, why did things go so wrong for so long, and did they ever go right?"

As the US Department of State political officer for the district with two years of on-the-ground experience, Dr. Malkasian possesses unequivocal credibility. The “deep-dive” experience gained during such an extended period—at least when compared to most American personnel in Afghanistan—sets War Comes to Garmser apart from the majority of books on Afghanistan and deserves a wide readership. Like its forbear, War Comes to Long-An by Jeffrey Race, War Comes to Garmser is a book for posterity, as well as for the current generation.

Regarding the book's organization, chapter one focuses on the composition of Garmser District's geography and people. What makes the district unique is a system of irrigation canals stemming from the Helmand River that were funded by the United States from the mid-1950s to the early 1970s. The canal development was an investment used to offset Soviet influence during that time but was also the beginning of many problems for Garmser. Most salient of these were the problem of who owned the fields created as a result of irrigation improvements.

As Dr. Malkasian shows, the successive waves of jihad, civil war, and rise of the Taliban had, in Garmser's case, a basis in contested political control over available land that the canals increased.

Chapter five exemplifies the book's value and is pivotal with regard to the United States' involvement in Afghanistan. In this chapter Malkasian depicts how the Karzai government fell apart and how the Taliban returned in 2006.

This series of events were contingent on numerous factors astutely explained in the earlier chapters of the book. These include the problem of land ownership and problematic attempts at land reform; the role of Islam and the politicization of Taliban mullahs (teachers); the structure and inefficiency of Karzai's government; and the personal relationships between tribal elders, their people, and the factious outcomes of individuals and groups seeking political power.

When the United States, and later NATO, became enmeshed into these factors, it created a set of outcomes for which there were certainly numerous alternatives. In some cases these outcomes have been positive, such as the building of the Afghan National Army, numerous reconstruction projects and others.

Alternative courses of action, however, could have been taken in those cases where the outcomes had pernicious effects. Prominent of these include the decision to not focus on Afghanistan with greater attention and resources after the Taliban's fall in 2001. Additionally, the non-centralized hierarchy of Karzai's government and allegations of its venality have remained problematic. All of these problems are notwithstanding the more valuable resources of over two thousand NATO Coalition military personnel lost and thousands more injured, let alone the tens of thousands of Afghans killed, injured or displaced.

These are all consequences of the United States' and Great Britain's involvement which Dr. Malkasian examines in the context of its role in Garmser District. The remaining chapters of the book, particularly chapters 10 and 11, along with a sobering conclusion, primarily examine the possibilities that existed but were either ignored, avoided, or simply just not possible to accomplish but that bring us to our current plight in Afghanistan.

While these lost opportunities are frustrating, the results of War Comes To Garmser are highly informative and instructive. While Dr. Malkasian provides no final assessments and retains his focus upon efforts in Garmser throughout the book, his efforts do speak to the larger effort in Afghanistan.

War Comes to Garmser transcends trite exhortations to read it. Those who have smelled the pervasive smoke and experienced the sweltering heat, both in Vietnam, Afghanistan, or other similar environments will find their time well spent with this work.

All others may also gain an informed sense as to why our efforts in Afghanistan, or least Garmser District, are not what were hoped for or envisioned.