War and American Life: Reflections on Those Who Serve and Sacrifice 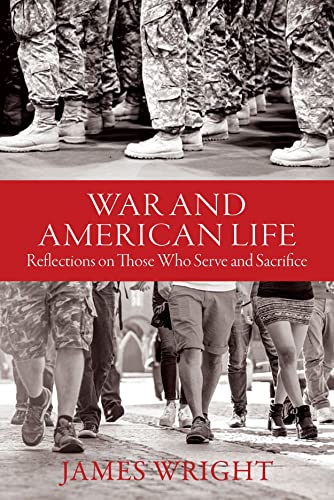 “an important book brimming with essential insights about what it means to be a nation at war.”

After serving as Dartmouth’s president for more than a decade, historian James Wright returned to the classroom and turned his scholarly attention to the human consequences of war. With an urgent voice and an eloquent pen, he became a tireless advocate for U.S. military veterans, many of whom he met as they convalesced from war injuries in hospital rooms across the nation.

As a new generation of United States soldiers waged new kinds of wars in Iraq and Afghanistan, Wright produced two fine works of history aimed at a popular readership (Those Who Have Borne the Battle and Enduring Vietnam). He also advised members of Congress as they worked to secure a modern GI Bill, promoting the importance of access to higher education for veterans. Now, in War and American Life, Wright collects more than three dozen of his public lectures, opinion pieces, and scholarly essays on war, veterans, and the manifold challenges of reintegration. The result is an important book brimming with essential insights about what it means to be a nation at war.

The essays are divided into five parts. In “Reflections,” Wright supplies autobiographical musings about his own military service that cast into sharp relief the experiences of our servicemen and women today. Eight essays comprise the second section, “Advocacy,” which documents the development of the post-9/11 Veterans Educational Assistance Act of 2008. In “History Lessons,” Wright presents essays on how Americans have remembered the wars in Korea and Vietnam, and how these conflicts posed unique challenges in the lives of their veterans. “Responsibilities” turns to more recent engagements, while two concluding essays ponder “Challenges.”

Several key arguments cohere. First, Wright is especially troubled by the reality that recent American wars have been fought by men and women “increasingly less representative” of the population. Not only have the sacrifices exacted by combat been borne inequitably, he writes, but too many Americans lack understanding of what it means to go to war.

In earlier conflicts, virtually every American knew someone who was serving, or someone who was otherwise contributing to the war effort; it was difficult to deny the realities of combat. Today, war can be sterilized and all but removed from public view. The author marvels, for instance, that the contests in Iraq and Afghanistan failed to produce any urgent debate in recent presential campaigns.

No less troubling for the author is the reality that our recent conflicts lack both traditional front lines and cogent military objectives. Wars with “complex rules of engagement,” he writes, are “difficult wars for our military to fight and difficult engagements for our democracy to sustain.”

Wright writes with passion, perspective, and purpose. Calling to mind the controversies that attended efforts to commemorate previous American conflicts—most notably the debate over Maya Lin’s design for the Vietnam Veterans’ Memorial—he insists that “Iraq and Afghanistan veterans need to tell us how they want our nation to remember their wars and how to memorialize those who died in these conflicts.” He reminds us that raw, individual memories and vexing moral injuries rarely align with the public’s demand for unambiguous heroism. He laments the loss of an “emphasis upon service as a shared obligation.” And he prompts us to wonder how our current age of political brinksmanship will affect veterans’ healing and reintegration.

Though today’s Americans seem capable of “supporting the troops” even as the oppose their war(s), the shabby state of our political discourse may sow disillusionment among reintegrating soldiers. This was certainly the case among U.S. Civil War veterans, left to wonder what exactly they had won amid the many betrayals of Reconstruction.

In sum, War and American Life deserves the widest possible readership. Clear-eyed yet never cynical, it is a brief for veterans—and a nation—in need of healing.