The Wandering Gene and the Indian Princess: Race, Religion, and DNA 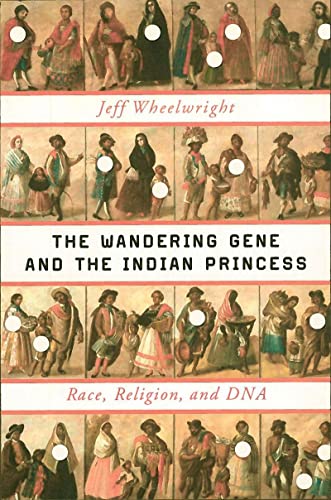 “The Wandering Gene and the Indian Princess took ten years to write and was very highly researched. Mr. Wheelwright obtained firsthand information through interviews with the Medina and Martinez families as well as with the researchers, Harry Ostrer and Stanley Hordes, adding gravitas to this fascinating account of genealogy, genetics, and race.”

Adeptly weaving science with family history, Jeff Wheelwright tells the story of Shonnie Medina, a vibrant young Hispano woman who died of breast cancer at the age of 28. She inherited a genetic mutation known as BRCA1.185delAG, which is characteristic of Jews.

The chapters of the book address various themes related to the story of the gene. It is not a chronological account of Shonnie Medina and her family. Mr. Wheelwright shows skill in developing the history, visual appearance, and mood of the San Luis Valley countryside where the Medina and Martinez family members settled. Interspersed within is a very clear and quite comprehensive scientific account of the mutated gene, which he is careful to point out is not a breast cancer gene but a tumor suppressor gene that fails to function.

The wandering gene refers to the 2500-year odyssey of the mutation from its origin in a Jewish community in the Middle East—a one-time mutation at this ancient time is generally agreed upon by specialists for other incidents of a similar mutation prove unconvincing. The author provides a fascinating historical account on how the mutation migrated with the Jews through Central and Eastern Europe, where the Jewish community was known as Ashkenazi, and through Spain in the Sephardic Jewish community.

The Sephardic Jews enjoyed a Golden Age under the Moors; however, with the expulsion of the Moors, the Jews were forced to convert to Christianity. This led to a distinction between the “Old Christians” (Spaniards whose racial heritage was pure), and “New Christians” (Jews who converted to Christianity), also known as conversos.

The Inquisition, however, targeted crypto-Jews: Jews who claimed to have converted, but who continued to practice Judaism in private. When the Spanish colonized Mexico, the Inquisition also flourished there though to a lesser extent. Due to the Inquisition, the presence of crypto-Jews in the San Joaquin Valley was virtually unknown.

The question of race is addressed by Mr. Wheelwright throughout The Wandering Gene and the Indian Princess. Race is generally considered a subspecies that develops as a result of isolation in groups or communities. This isolation can lead to an enhancement of certain traits, such as hair color or facial features.

There is an ongoing debate as to whether Jews comprise a distinct race. Racial purity has a dark side—as evidenced by the views of the Nazis and the Spanish during the Inquisition. Yet the idea of a Jewish race began during Biblical time, when the Hebrew prophets inveighed against marriage with outside peoples, placing an emphasis on genealogy or continuity of lineage.

For the Jews, race might be thought of as a combination of genetics and culture. Race was a factor in the Mexican colonies, as it determined a person’s status. Many families stressed their Spanish inheritance over their Indian origins, the former often evinced by lighter skin color.

But race was not an issue for the Medinas—they even took pride in their Indian heritage. When the surprising revelation of their Jewish heritage was revealed through their illnesses, the Medinas as a whole accepted this new contextualization of their genealogy.

In this story, Shonnie is noted for her beauty, charisma, and headstrong nature. The latter led her to reject standard treatments and surgery. The uses of alternative treatments proved fruitless, leading to her early death.

The appearance of the gene in the San Luis Valley was surprising and puzzling. After the death of Shonnie, members of the Medina family examined the incidence of cancer within the family, only to discover that the extent of cancer deaths was startling.

A genetic counseling session was held; blood samples were drawn. The results of the analyses showed (as expected) Spanish and Indian origins, a small amount of black origin, but also for the first time, about 1–2% Middle Eastern origin. Although the cause of the cancer was found to be due to 185delAG, this was puzzling since the defect was known to be associated with Ashkenazi Jews.

Since the Martinez family had Spanish origins, specialists realized that the gene must be present in Sephardic Jews as well. Mr. Wheelwright likened the mutated genes with the doctrine of predestination—as the genes determined the lifespan of the persons inheriting them.

Although the Medina family came to accept their Jewish origins, a controversy arose as to the extent of Jewish background in the Valley and how it came about. Stanley Hordes, a New Mexico historian, studied the Jewish identity through culture based on interviews and cultural artifacts. Harry Ostrer, an academic genetics researcher, studied how genes associated with Judaism could be found in the Valley. Although crypto-Judaism studies became very popular, Judith Neulander, an ethnographer, decided the studies were a sham, and attacked both approaches. The crypto-Judaism proponents regrouped and proceeded more carefully. Mr. Wheelwright describes these issues in an objective manner.

He also clearly and in considerable detail discusses how DNA analyses can be used to trace Jewish origins of a person. Inheritance through males can be traced through the Y chromosome, while female inheritance can be traced through mitochondrial DNA. A bottleneck or genetic drift occurs when inbreeding in a small closed society results in a concentration of certain genetic defects. This has occurred in some Jewish communities and may have occurred in the San Luis Valley communities as well.

The Wandering Gene and the Indian Princess ends with a discussion of the Medina family’s trials and successes, as well as of Joseph Medina’s final days.

The Wandering Gene and the Indian Princess took 10 years to write and was very highly researched. Mr. Wheelwright obtained firsthand information through interviews with the Medina and Martinez families as well as with the researchers, Harry Ostrer and Stanley Hordes, adding gravitas to this fascinating account of genealogy, genetics, and race.