The Wall: A Novel 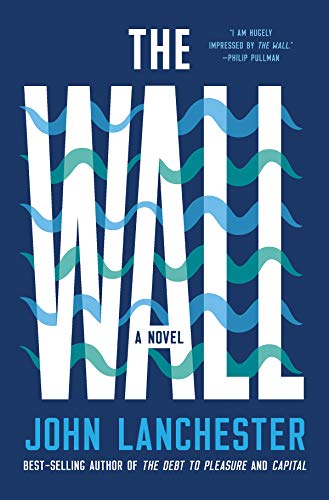 “The wall means having no choices. It means a bone-crunching ordeal of loneliness, isolation, hunger, and most of all penetrating cold.”

The Wall arrives presciently in a political era when we are building walls worldwide. There are walls between Israel and Palestine, between India and Pakistan, in Iraq, the Western Sahara, and along the southern border of the United States.

In Lanchester’s fictional domain, a nameless Island Nation has survived a catastrophic global degradation known only as “The Change.” Post apocalypse, it is now encircled by a 10,000-kilometer concrete wall separating the coast from a deadly sea and, more importantly, enemies who are referred to simply as “Others.”

Every citizen lucky enough to have survived the Change must serve a mandatory two years as a “Defender.” Standing at attention atop the wall for 12-hour shifts, you do what you are told. The wall means having no choices. It means a bone-crunching ordeal of loneliness, isolation, hunger, and most of all penetrating cold. “It’s cold on the wall. It’s the first thing everybody tells you.” It is also a world of relentless concrete: “You stand on it, you sleep on it, it’s your home and office, a place to eat and a place to shit.”

More than 300,000 people are involved in defending the wall. Others constantly try to breach it. Some who manage to make it over quietly infiltrate the population and disappear in the background. Others who are captured are given a choice: be executed or become indentured servants known only as Help.

It is a bleak and brutal existence. For every Other that makes it over the Wall, one Defender is put out to sea. That is the nature of justice on the island.

Lanchester has excellent control of language and pacing—short sentences, concrete nouns, not a superfluous word—to evoke the monotony of life on the wall and the unbearably slow passage of time. Defenders play mental games with themselves to mark events and make its passing more endurable. In its deliberate pacing The Wall compares favorably to Briefing for a Descent into Hell by Nobel laureate Doris Lessing, in which the central character in a psychiatric facility mentally relives his days of drifting, drifting, drifting alone in the sea. Lanchester’s tempo reflects time felt on the wall.

The book unfolds in three parts: The Defenders, the Others, and the Sea. While practicing wargames the narrator’s troop is ambushed. Only seven out of 30 survive. The survivors are arrested. They are “processed.” And then they are put out to sea where they become Others. The plot continues with one calamity after another, which the protagonist and a female companion all manage to survive. “Since the attack on the Wall,” he says, “I had learned to expect the worst. That was proving to be a useful habit.”