Walking Home: A Traveler in the Alaskan Wilderness, a Journey into the Human Heart 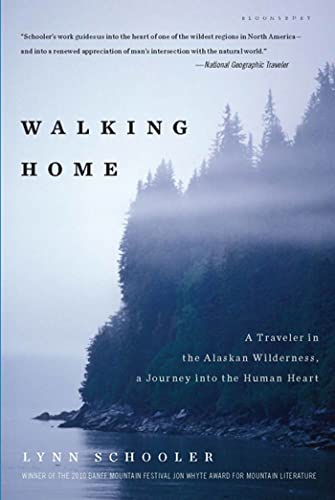 Few of us who live “in the lower 48” have any idea about what it is like to live in Alaska. Everyday living seems to be a mixture of survival, long winters, and a continuing partnership with the elements. Even fewer of us can imagine the vast loneliness of a solitary sixty-mile hike along Alaska’s southeast coast. Lynne Schooler skillfully takes the reader with him on a trek that proved to be far more than a walk on the beach.

Seeking solitude to help him understand and resolve the grief connected with a flagging marriage and the death of a dear friend, Schooler sets off hoping to find some answers. He admits that he is not a particularly brave man, and that others have done deeds of daring that far exceed his. Still, in his journey, he weaves his own “metaphor for life:” “leaving the womb of the boat, with its ready supply of nourishment and comfort . . . crawling and scrambling infant-wise on all fours across the rocks. . . . (Finally) walk(ing) upright . . . (to) find my way.”

Although a resident of Alaska for forty years and a skilled outdoorsman, Schooler was not insulated from the challenges of such an endeavor. These included being stalked by a bear, maintaining equilibrium against relentless wind and rain, and dealing with the dull aches that come from sleeping on the ground—no matter how often you’ve done it.

Along the way, it is easy to forget that the author is totally alone, since he includes many key characters and events that make up the history of the area. In learning these stories, one also learns about the culture of survival and community that makes up the Alaskan landscape.

He tells us about James Todd Huscroft, a man who claimed to have made and lost three fortunes in gold mining, but walked away after a mine collapsed, sparing his life. He lived out his remaining years as a hermit, his only companions being the travelers who came through, and the people he met during his annual trip into town.

Included are marine disasters, such as the disappearance of the Dora B. in 1900, or the Gale of December 11, 1938, during which marooned sailors were led to safety by a trapper. Suspense builds as the author describes the fate of various fishermen and berry pickers following the 1958 earthquake that measured 8.3 on the “moment magnitude scale.” The mega tsunami that followed had the force to strip the land going one-quarter mile inland from Lituya Bay.

Schooler’s writing is rich with quotations from other writers, adding to his own profound sense of reverence for the area and for life itself. Chapters flow easily from one to the next. The story comes from his own journal, but also from extensive research at the Alaska State Historical Library, and conversations with area guides, geologists, fishermen, and rangers. The book would have been enhanced by additional map insets and some pictures. The author’s descriptions are so vivid that they leave the reader hungering to “see” more.

Ultimately, Schooler’s triumph comes not from subduing nature or the thrill of winning a race against the elements. It comes instead in the form of his own insights and the realization of what is important to him. This has little to do with competition and everything to do with the people he realizes comprise the center of his life.

The book is beautifully written, deep yet clear, and highly informative. Whether boiling water for tea, or sharing a yarn from Tlingit culture, Schooler weaves the ordinary tasks of everyday life into the fabric of history and folklore.