Walking to Hollywood: Memories of Before the Fall 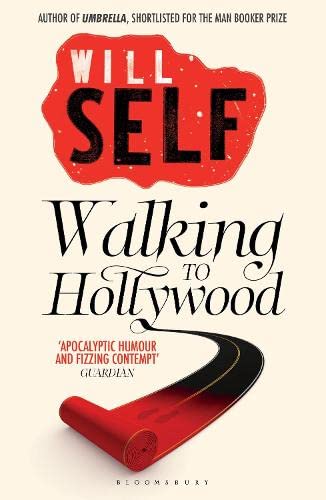 In the United Kingdom, author Will Self is well enough known to have been the punch line for a rapid-fire gag on “Absolutely Fabulous,” which is, in the realm of pop culture, high praise indeed.

But here in the United States, he has yet to leave his mark, either on “Seinfeld,” “Everyone Loves Raymond,” or “Modern Family”—meaning that here he is pretty much unknown, which is perhaps a sad thing, given how very much he seems to want to be noticed by us Americans.

In his new book, Walking to Hollywood, Mr. Self spends a great deal of time walking about in America, in Miami, New York, San Francisco, and, especially, as promised by the title, Los Angeles—walking about and pondering his way through three tales, of which the fictional memoir “Walking Through Hollywood” is the centerpiece.

As the character “Will Self “(who may or may not have any similarity to author Will Self) explains to his psychiatrist/nemesis Dr. Zack Busner:

“‘Don’t be facetious—you know my methodology: I’ll walk from my house to Heathrow—probably via Pinewood studios where they’re shooting the new James Bond film—then I’ll fly to LAX, and walk from there on to Hollywood.’

“‘Dangerous territory for you. I should’ve thought—given the events of last year.’

“‘That was different, I, I was caught unawares—I didn’t have an objective.’”

The events of last year? Another walk, another mission. With Marianne Faithfull, yet. Mr. Self, it seems, is given to walking distances in order to get things right in his brain. But why the walk across Hollywood? As Mr. Self continues with Busner:

“‘I want to find out who killed film—for film is definitely dead, toppled from its reign as the pre-eminent narrative medium of the age. I don’t know is film was murdered—but I suspect there’s a killer out there.’”

Here, at page 122 of the text, the reader pauses to sigh with relief that Mr. Self does not consider literature the pre-eminent narrative medium for our age. Where, the reader asks, would Mr. Self have had to go for find its murderer?

In this case, the where is simple enough, for, while millions the world over can’t find Iraq or New Zealand for the Nile on a map, seemingly everyone knows right where Hollywood is—perhaps because its name is writ large on the hillsides over the town. And everyone seems to feel a certain ownership with the place as well.

Most certainly Mr. Self does. When writing about Hollywood, he writes with the sensual, even sticky prose of a particularly ardent lover. His walk through the streets of is akin to the slow touch of fingertips on naked flesh, as this exchange between Mr. Self and noir detective “Mac Guffin” (character name as pun—get it?) reveals:

“’That’s not all, man, ’cause after all there’s thousands like you in this town but you’re different: you’ve got the motivation. The movies may’ve rejected you, but then you go and fall in love with Angel herself.’

“‘I’ve read your stuff, man, it’s a fucking love letter to L.A., all about how she’s been betrayed by the movies, how they eyed her up, used her, then cut her up into so many pieces nobody can put her back together again—no one, that is, except you. That’s what this walking tour is really about—you aren’t looking for who killed the movies, you’re trying to get your skinny shanks inside L.A.’s hot haunches.’”

Hot haunches aside, the walk from LAX into the heart of Hollywood is perhaps the most perplexing trek since Kurtz penetrated his Heart of Darkness. Very soon after landing in Los Angles, Mr. Self begins to see the people he meets not as they are, but as actors portraying them. He sees himself the same way—not as Will Self, but at various times as either actor David Thewlis (who, like Mr. Self, is not well known in this country, although everyone in this Hollywood of the Mind seems to recognize him—perhaps from his best known movie, Mike Leigh’s Naked, although he did have small parts in The Big Lebowski and some Harry Potter movies) or the late actor Pete Postlethewaite (another British actor who is not particularly well known here, although he was magnificent in many films, especially Jim Sheridan’s In the Name of the Father, for which he was nominated for an Academy Award).

Through the device of presenting characters as actors portraying characters, Mr. Self manages to meet Ellen DeGeneres, Orson Welles, and Robert De Niro during his excursion into Hollywood and to reveal that fact that, like many millions of folks outside America, his knowledge of Hollywood borders on the obsessive.

And that, like the many non-Americans who try to write about Hollywood, his understanding of the place, its people and their collective meaning is somehow just a bit off. We get, while Mr. Self walks, every possible L.A. archetype, from the aforementioned noir detective to the Day of the Locust mob, to the haunted Roosevelt Hotel, to the drugs and alcohol of Less Than Zero, to Psycho showers, to the famous opening shot of Orson Welles’ Touch of Evil, to author/character Self’s obsession with Joe Gillis, the down and out writer, whose loss of a car triggers a fatal chain of events in Billy Wilder’s masterpiece, Sunset Boulevard.

Of that, there is this:

“A man walks these streets alone—why, hasn’t he got a car? Has he, like the failing screenwriter played by William Holden in Sunset Boulevard, had it repossessed? ‘You’re cutting my legs off!’ Yes, I remembered now: that was what Holden-as-Gillis howled despairingly as the two truck jounced away. No, our man walks out of choice, and walks because only on foot can he engage in the sciamachy essential to his trade: fencing with the shadows of hat brims, gun muzzles and arms flung across brickwork by the beams of the Kliegs.”

Which is perhaps to suggest that “sciamachy” (Google it) is as good a word as any for what Mr. Self is up to here. Or, to suggest another bit of Hollywood iconography, this is a Le Brea Tar Pits of a novel: that which struggles in surely gets sucked under.

Mr. Self is playing games here, in all three sections of his novel. As he reveals in a brief afterword:

“All works of fiction represent terrains across which character travel, and while the writer maps these he is down there on the ground, orienting by compass—whether moral or otherwise—and the familial resemblances of faces, landmarks, and geographical features. Only toward the end of the journey, when he climbs the last hill, does he look back to survey the entire territory; only then does he understand the nature of the particular route taken.

“When I reached the end of the book—so contorted, wayward and melancholic—I looked back and saw my father-in-law’s death by cancer in 2007, Freddy Moody’s murder in July 2008 and the death of J. G. Ballard in April of 2009. The mental pathologies that underlie the three memoirs—obsessive-compulsive disorder for [section one] ‘Very Little’, psychosis for [section two] ‘Walking in Hollywood’ and Alzheimer’s for [section three] ‘Spurn Head’—are themselves displacements of a single phenomenon.”

I include the spoiler without advanced warning as I believe that it is of value and not harm to the reader to have this knowledge going in—and that the afterword would have made for a better preface.

Knowing the map of the territory traveled is interior as well as geographical is of great help in the reading of “Spurn Head,” for example, the third and final section of the book.

Here a man—a character once again named Will Self—begins another journey on foot:

“I conceived of taking a walk from Flamborough Head, north of Bridlington, where the chalk synclines of the Yorkshire Wolds are sheered off by the brown sea, to Spurn Head, that peculiar three-mile shingle bracket that hooks round into the wide mouth of the River Humber. It occurred to me that were I to keep for the entire distance within six feet of either cliff edge or shoreline, I would, very likely, have completed a journey it would be impossible to anyone to every make again. By the time another year had passed the solid ground that had risen up to meet my feet would have disappeared forever.”

In language as beautiful as his Hollywood phrasing is twisted and bizarre, Mr. Self writes of the loss of self to Alzheimer’s as a final walking trip along the cliffs of Yorkshire as they tumble and dissolve into the sea. That melancholy journey and, especially, the moment in which a seal pup is found on a deserted beach, it as brilliant and moving as anything this reader has come across in the last 20-or-so years. Notice this shard of the text that suggests the subtle onset of Alzheimer’s:

“The dogs had dragged their walkers off, the kite flyers skittered away, the wind was rising, and there were no particulars anymore with which to judge the scale of things, only the universals of sand, sea and sky.”

The reader can only conclude that Will Self is something of an anchovy and that other readers will likely either love him or hate him, accordingly. It is not a matter of talent—the words spew across the page, daring you not to read them. It is a matter of the struggle involved in knowing “Will Self” and whether a reader is up for it or not. In the case of Walking to Hollywood and its three “memoirs,” the first part is rather dull, the second, a hallucinogenic bad trip, but the third, oh, the third—few things in print these days are so well worth the price of admission.