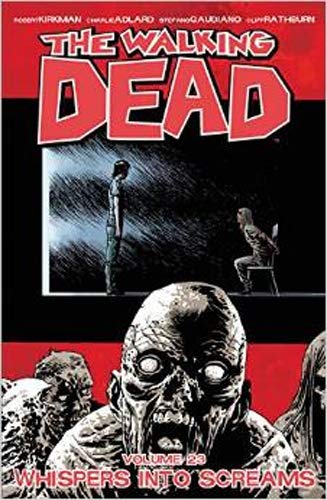 “just like the monsters that haunt the pages, zombie storytelling never dies.”

The Walking Dead has become quite the cultural phenomenon. From the 22 previous volumes of the comic book series to the hit TV show and soon to be broadcast spin-off series, TWD has kept the zombie genre going while many have said the undead are past their prime.

That criticism is mostly true for a majority of the hundreds of zombie novels and rip-off series that have been launched the past couple of years. And that criticism could easily be true for The Walking Dead if it stayed on its formulaic path of survivors meet big bad guy and fight big bad guy then beat big bad guy. But as begun in Volume 22, Volume 23 of the acclaimed comic book series has changed courses and is heading in a direction that holds nothing but promise and intrigue for its readers.

In Volume 22, time skipped ahead to when Rick Grimes and company finally made a home for themselves in the ruins of Northern Virginia. They fought off the crazies and made alliances with other regional survivor groups to maintain a semblance of peace and security. Volume 23 takes off with this new story line, but instead of keeping Rick in the forefront as the perpetual protagonist, it is his son Carl that takes the reins.

Robert Kirkman has shown that he knows how to take a trope that threatens to grow old and keep it new and interesting without losing the spirit of the genre. A breath of fresh air from the tired old zombie stink, Volume 23 puts the reader firmly in the life of Carl and his struggles dealing with adolescence and coming to terms with who he was as a boy, who he is as a teenager, and who he could become as a man. Love, loss, rage, confusion, and misunderstandings all abound in this well written volume and true beginning of the new story arc for The Walking Dead.

Couple the storyline that includes new characters and new adversaries with Charlie Adlard’s skillfully simple, yet complex black and white illustrations (inked by Stefano Guadiano with gray tones by Cliff Rathburn), and The Walking Dead is still as relevant and exciting today as it was when it first launched in 2003.

It is rare for a comic book series to last this long, especially one not run by Marvel or DC, but The Walking Dead has managed to do it and still maintain its original sense of horror and desolation that intrigued so many readers over a decade ago.

The Walking Dead Volume 23: Whispers Into Screams is the first of what promises to be a long and fulfilling future for the franchise and its loyal readers. If Kirkman and company can maintain the quality shown in Volume 23 then those that insist the zombie genre is over may need to rethink their shortsighted criticisms and admit that just like the monsters that haunt the pages, zombie storytelling never dies.