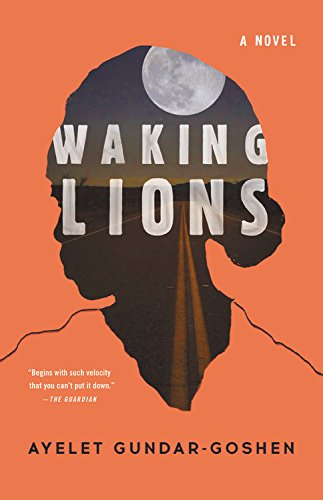 Ayelet Gundar-Goshen’s (One Night, Markovitch) second novel Waking Lions starts as a moral drama in its first 14 chapters and becomes a suspenseful crime thriller in its final 11. Its strength lies in its third person narration’s shifting perspectives that develop its characters’ backstories and dramatic situations in the first part and its page turning pacing in the second part, in which the novel’s unanswered questions are resolved.

Eitan Green is a neurosurgeon who after discovering his supervisor’s unethical conduct has been exiled from Tel-Aviv to Beersheba’s Suroka Hospital in the Negev desert, which is like being transferred from New York to Albuquerque. That piece of bad luck establishes Eitan as an initially ethical person who doesn’t go along to get along.

To compensate for the demotion and perhaps as part of a midlife crisis Eitan buys a red SUV to drive at high speeds on empty moon-lit desert roads after long hospital shifts. Perhaps this overcompensating or midlife crisis explains why it doesn’t occur to him that an exhausted driver should drive within the speed limit and go straight home to get some sleep.

With Janis Joplin on the vehicle’s high-end sound system filling his ears and his eyes on the desert moon he runs over a man crushing his skull. The man is an Eritrean illegal immigrant, and in a lapse of moral judgment Eitan, who has sworn to save lives, decides the wound is mortal, that the man will die even if driven to the hospital, and fearing that even an accidental killing could cost him his career, gets back in his car and abandons his victim.

The next day the victim’s strikingly beautiful widow Sirkit shows up at Eitan’s door, returns the wallet that had fallen out of his pocket while he was examining the dying man, and demands to talk. Eitan agrees to meet her at night at an abandoned garage formerly used by Kibbutz Tlalim near the site of the accident. The typographic presentation of the dialogue reinforces Sirkit’s foreignness: Eitan’s words are in quotation marks while Sirkit’s are in italics. Yet the scrappy, resourceful Sirkit is one of the novel’s bright spots and holds her own amid a cast of well-developed characters.

A panic striken Eitan withdraws 70,000 shekels (about $17,500) from his and his police detective wife Liat’s bank account and in another lapse in judgment hands it to Sirkit without demanding her silence and without considering that reporting him to the police would likely result in her eventual deportation. Sirkit accepts the money and demands that Eitan spend his nights seeing illegal immigrant patients at a clinic in the garage as the price of her silence. Readers must suspend disbelief and accept that large numbers of African illegal immigrants traveling late at night to and from an abandoned garage goes unnoticed by authorities.

As luck would have it Liat is assigned the case of the hit-and-run homicide, whose initial suspects are local Negev Bedouins. Gundar-Goshen’s individual characters thus also represent groups: privileged Jewish Israelis, less privileged and sometimes criminal Arab Israelis, and the African illegal immigrants who are exploited by both groups of Israelis. Within their marriage Eitan is a light-skinned Ashkenazi Jew, and Liat is a dark skinned Mizrahi Jew, and both are university educated and come from upper-middle class families.

Eitan “had never lied to Liat like that, and it both relieved and frightened him that it was so easy.”  But each time he lies to her it becomes less easy and less convincing. How long Eitan will not only be able to lie but also function at his day job at the hospital where he steals medicines, bandages, and even oxygen tanks to bring to Sirkit’s clinic; as a father and husband in the evenings; and as a garage clinic doctor at night on only three or four hours sleep provides dramatic tension in the first fourteen chapters.

Readers also wonder, what Eitan will lose first: his job or his family? Will Liat ever solve the case of the hit and run Eritrean? As Eitan and Liat grow apart a mutual attraction/affection tinged with resentment develops between Eitan and Sirkit. Yet Sirkit is the only Eritrean he sees as fully human, and his descriptions of the long lines of nocturnal patients waiting for treatment are frankly racist.

Just how interwoven are the relationships between the three ethnic groups and the roles of individual characters in an underlying background narrative is revealed in the page turner/crime thriller final 11 chapters. It is also the most enjoyable part of the book, a kind of reward after the slower paced but more literary first part.

Gundar-Goshen’s masterful command of plot and characters is only marred by a few unconvincing plot elements, by the occasional flat simile, such as comparing Eitan’s stubborn simmering anger to a Sabbath hotplate that cannot be turned off for two days, or overweight adjective as in “the carcinogenic sun.” Without the Hebrew text it is hard to know whether something is lost in translation, but the strength of translator Sondra Silverston’s translations of other authors suggests that the phrasing might be equally weak in the original.

Readers willing to overlook such missteps will be rewarded with a richly developed and ultimately fun read that has something to say about individual ethics, haves and have nots, and the global migrant crisis—thought provoking issues that should stimulate book club discussions.