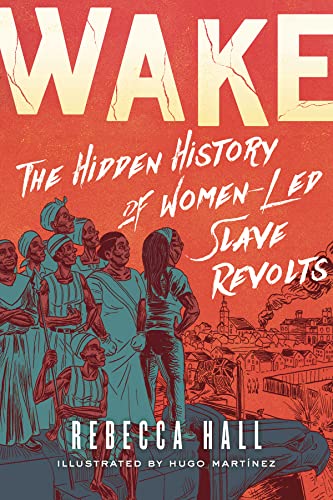 “High school students should be especially eager to read this history, a sense of 1700s America they won’t find in their textbooks.”

Women’s history in general has been left out of “mainstream” history, that is, the conventional history that has been written by men and focuses on their actions. Black women have been even more marginalized, especially during the dark days of slavery. Rebecca Hall has done some incredibly thorough research to find these missing women and tell their stories as vividly as she can.

Hall’s search provides the frame and running commentary for the histories she explores and the graphic novel’s art toggles back and forth between contemporary scenes of Hall and those of the 1700s, sometimes incorporating the two together in the reflections of puddles.

In general, though, the art by Hugo Martinez doesn’t add much to Hall’s powerful story, which is a shame, given the inherent potential of the graphic format. The emotional power of creating characters, settings, visual pacing are singularly missing from the art form, which contents itself with visually echoing the text rather than expanding beyond it. If the story were printed as text only or heard as an audio book, there wouldn’t be the sense of missing an important part of the narrative. The one advantage of the graphic format may be that it makes a tough story more accessible by breaking it up over more pages, allowing the reader the rest of the page turn. If the format brings more readers to this important history, that’s reason enough to welcome the graphic illustrations.

Hall is a lawyer by training and much of her doggedness and careful interpretation clearly comes out of her legal training. Working as a tenant’s rights attorney, she becomes keenly aware of the deeply ingrained issues of racism, advising her Black women clients that they need to “act like white women” to be granted bigger awards from juries. By this, she means to act vulnerable to garner sympathy. She writes:

“I could ‘win’ these cases for my clients. But I felt the need to see underneath the ‘Justice system’—to get at the root of what was warping the world.”

This search leads her to investigate enslaved women’s roles in slave revolts. Hall is looking for examples of women fighting against injustice rather than passively suffering from it. In much the same vein, Jewish historians have looked for—and found—stories of courageous Jewish women daring to fight back during the Holocaust rather than passively accept death, giving us a different sense of Jewish response to Nazi brutality. Hall wants to uncover the buried stories of women’s bravery and daring, to find positive images of Black women during the ugly history of American slavery.

Hall narrows her search to slave revolts in New York in the early 1700s when the colony was still part of the British crown. She ploughs through mountains of archival documentation and finds a lot of writing about major revolts, some with tantalizing mentions of women fighters. What’s lacking, however, are details. Why record women in the historical record after all? “You think you are reading an accurate chronicle written at the time, but if who we are and what we care about are deemed irrelevant, it won’t be in there.”

The lack of detail doesn’t deter Hall who expands her search to revolts on slave ships. She wonders

why revolts didn’t happen on slave ships more often. The answer, she discovers, is that they did— “there was a revolt on at least one in ten of these voyages. That was a much higher number than anyone expected.” Even more intriguing, she learns that: “The more women aboard a slave ship, the more likely a revolt.”

This brings Hall to one of her most powerful discoveries, the pivotal role women had in these uprisings:

“The answer was immediately obvious to me: the people who regulated this business, developed slave ship operating procedures, and actually ran the ships, kept women mostly unchained, on-deck and near the weapons. . . . The women used their relative mobility and access to weapons to plan and initiate revolt after revolt.”

Time after time, women fought their captors and got weapons to the men chained below deck. Still, “the slave ship crews remained oblivious to the agency of enslaved women.” It was, after all, inconceivable that women should fight like this even when crews experienced it themselves. Each time, it was considered a total aberration, a completely “unfeminine” way of behaving. These kinds of male assumptions about women’s abilities have dogged women—of all races and backgrounds—for millenia, yet also given them the protection of invisibility to act as spies, saboteurs, guerrilla fighters, hidden in plain sight because men simply didn’t consider them as possible threats.

Hall shows how effective these women were, and, just as important, how central their stories are for Black women today to claim a positive history rather than a completely negative one of brutal victimhood:

“When we go back and retrieve our past, our legacy of resistance through impossible odds . . . we redress the void of origin that would erase us. We empower and bring joy to our present.”

Wake is a good place to begin retrieving this past. High school students should be especially eager to read this history, a sense of 1700s America they won’t find in their textbooks