Waiting for Sunrise: A Novel 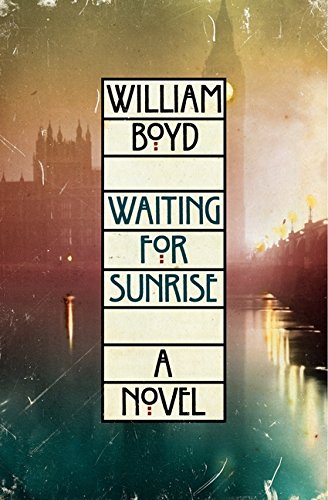 “. . . this is a story about the subtle shadings between truth and performance, between acting and the ‘true self’ which we present to the world. It’s about disguises, uniforms, clothes which we don in order to mask our intentions. It’s about the truth we tell ourselves and the secrets we hide. . . . Throughout the text, William Boyd keeps the reader guessing. He, too, withholds certain truths in order to enhance the narrative. We’re never entirely sure that we can trust any of the characters, especially our unreliable narrator—or the author. Waiting for Sunrise comes in disguise, and the sheer pleasure in reading this book through the wee small hours until sunrise truly does come, lays in discovering what truth in this novel actually is. A stellar effort.”

“Not for the first time in this whole affair I felt myself wantonly adrift—seeing a few details but making no connection—and also consumed with the feeling that invisible strings were being pulled by a person or persons unknown and that I was attached to their ends.”

With his new novel, Waiting for Sunrise, William Boyd proves himself once again a master puppeteer, an ingenious puller of invisible strings, an adept juggler of narrative balls.

Following his celebrated and critically acclaimed previous novels A Good Man in Africa, Brazzaville Beach, Any Human Heart, and Ordinary Thunderstorms, this new offering is a sophisticated thriller of the type that proves beyond any reasonable doubt that the best crime fiction doesn’t have to be held back by “genre,“ but can actually be just as intelligent and as thought-provoking as literary fiction.

Mr. Boyd, twice a winner of the Costa/Whitbread Award, is a consummate storyteller. In Waiting for Sunrise his prose is at once both tremendously readable and utterly intellectual. His characters are more than mere crime fiction ciphers, they excellently psychologically realized and fully fleshed-out.

His plotting is carefully considered, immaculately constructed, and yet the action never loses pace. This is always an intense and surprising read and perhaps is proof at last that there is such a thing as literary crime fiction.

Set against a backdrop of Europe on the verge of war, Waiting for Sunrise is the story of Lysander Rief, a young English actor, who has travelled to Vienna, home of psychotherapy (and Freud, who makes a cameo appearance) in order to undergo treatment for a problem of a sexual nature. In Vienna, despite wishing to keep himself to himself, he quickly becomes embroiled in scandal and, shockingly, finds himself (falsely) accused of rape.

The novel opens with a passage of description. Mr. Boyd quickly draws us into the action through his use of second-person narration, which inspires the immediate feeling that we are spying on Lysander: “You decide to follow him for a minute or so, vaguely intrigued and having nothing better to do.”

This brief passage—the rest of the novel is shared between third- and first-person narration—sets the tone of the novel well, for this is a story about the subtle shadings between truth and performance, between acting and the “true self” which we present to the world. It’s about disguises, uniforms, clothes which we don in order to mask our intentions. It’s about the truth we tell ourselves and the secrets we hide.

Ultimately, this is a novel about truth. It is prefaced with quotes from Ernest Hemingway and Sophocles regarding the nature of truth. Lysander, our protagonist—who “looks like someone who is far more at ease occupying the cold security of the dark; a man happier with the dubious comfort of the shadows”—wants to discover the truth about himself, through the “Vienna treatment.”

But as he soon discovers, truth is not a solid, immutable object. The truth is shifty, difficult to pin down. The truth lies beyond geographical boundaries or tightly wrapped up within our subconscious. And here, Mr. Boyd’s use of psychoanalysis as a key theme of the novel neatly reflects his quest, as a writer, to detect ‘truth’ in his characters.

Mr. Boyd sets us a number of conundra in the text. Can we really trust reality as it is presented to us? What is really happening behind closed doors? At the lodging house where Lysander has set up temporary home in Vienna, “who knew what lay beyond Privat?” What dark secrets are being held back? A fellow resident has a suggestion: “This place—this Pension Kriwanek—is just like Vienna. You have the world of Frau K on top. So nice and so pleasant, everybody smiling politely, nobody farting or picking their nose. But below the surface the river is flowing, dark and strong. . . . The river of sex.”

Sex does appear to be the primary motivation for a many of the decisions taken by the characters here. Which is again fitting, seeing as though this takes place in the home of Freud. And as the narrative progresses, we discover more about Lysander and his wholly complicated relationships with women. We meet his fiancée Blanche, his mother, the mysterious widow Madame Duchesne, and the enigmatic Hettie Bull.

Hettie Bull is another Brit abroad in Vienna. Lysander meets her in the psychotherapist’s (Bensimon’s) waiting room in a scene that recalls a similar one in “The Sopranos.” He’s intrigued by her: “Why am I troubled by this encounter with HB? . . . She’s not ‘my type’ at all, yet I already feel somehow drawn into her life, willy-nilly, her orbit. Why? . . . Because we met in the waiting room at Dr. Bensimon’s we know something secret about each other, already . . . The wounded, the incomplete, the unbalanced, the malfunctioning, the ill seek each other out: like attracted to like.”

It seems somehow preordained that Lysander will begin an affair with Hettie, despite her attachment to a German artist and his previous engagement. And when they do, both endeavor to hide the truth, booking separate rooms at hotels, and exchanging love letters and information regarding their next rendezvous behind the bar of a local café. But then everything is turned on its head when Hettie presses rape charges against him and Lysander, in disgrace, is taken to an Austrian jail.

Through his encounters with Bensimon, Lysander has been encouraged to compile a kind of “dream diary” a “journal of yourself”; “a record of your mind during these coming weeks, conscious and unconscious.” These first-person musings he entitles his Autobiographical Investigations, and through them, Lysander and author Boyd struggle to discover the “truth” of the situation. And, although he manages to get the rape charge dropped (thanks to some assistance from the British diplomat, Munro) and escapes back to London, the memory of his ordeal starts to haunt him.

And when Munro appears in London, demanding that this favor be returned—Lysander must travel to Geneva to extract a secret code from a double-agent there, by hook or by bloody crook—events take an even more sinister turn.

This is a novel in which secrets, deception, disguises, and interruptions get in the way of truth. Whenever Lysander seems on the brink of some important self-discovery, his musings are interrupted. “He missed his meetings with Bensimon. He—” And: “This monstrous global conflict was in its tenth month, and he had never even—” And: “Frustrated, Lysander wondered if he could score some petty revenge and have Osbourne-Way’s extravagance brought to the attention of someone senior to him, a quiet word that might have the effect of—“ And: “He wondered if Madame Duchesne would notice the subtle—”

Lysander can trust nobody. Everyone he meets is playing a role: “We’re all actors, aren’t we? . . . You, me, your mother, Munro and the others. Some are good, some are average. But nobody really knows what’s real, what’s true. Impossible to tell for sure.”

Madame Duchesne, his contact in Geneva, is also an actress: she always wears widow’s veil. Only her perfume is distinctive, offering what Lysander thinks is a “trace of the real woman. A little clue.”

Lysander himself adopts a disguise to flee Vienna, and then again on his mission to Geneva, when he takes on the part of a Swiss-German railway operative. He’s an actor by trade, and is half-Austrian too, which means his identity is a naturally shifting one.

In the end, the shifting sands of truth provide no real foundation for him and paranoia begins to take him over. “. . . other questions nagged at me, troubled me and set me thinking again, until by dusk all was confusion once more. Maybe this is what life is like—we try to see clearly but what we see is never clear and is never going to be. The more we strive the murkier it becomes. All we are left with are approximations, nuances, multitudes of plausible explanations. Take your pick.”

Throughout the text, William Boyd keeps the reader guessing. He, too, withholds certain truths in order to enhance the narrative. We’re never entirely sure that we can trust any of the characters, especially our unreliable narrator—or the author. Waiting for Sunrise comes in disguise, and the sheer pleasure in reading this book through the wee small hours until sunrise truly does come, lays in discovering what truth in this novel actually is.