Wade McClusky and the Battle of Midway 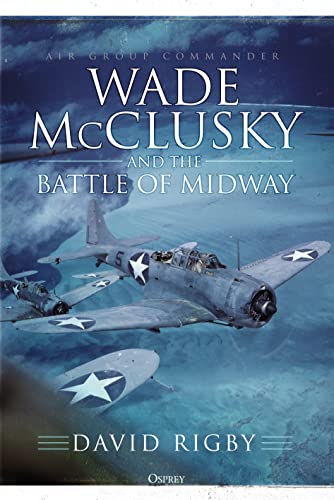 "Rigby tells an exciting tale with action coming in right away in the first chapters."

"Every book about the Battle of Midway mentions Wade McClusky, but usually only in passing." He gambled and found the "Japanese fleet [when it] was not where he expected it to be." Then he ordered his dive-bombers to attack it.

McClusky deserves more than a footnote. "His actions on June 4, 1942," "the contributions to American victory," did not happen by accident. One of the oldest pilots in the Navy, David Rigby writes, "McClusky was experienced in and familiar with the characteristics of every type of aircraft in the naval inventory of the time. Just prior to Midway he was awarded the Distinguished Flying Cross."

David Rigby in writing this biography of McClusky sets out to give the hero his due but also "accusations made in recent literature" "to disprove these fallacies." In half an hour, "McClusky's pilots destroyed, IJN Akagi and Kava," "the pride of the Japan's navy" and the largest aircraft carriers in the world. McClusky had "an excellent claim to being the most important factor in the American victory."

"McClusky's ability to keep calm under immense pressure enabled him to find the Japanese fleet" "and improvise when things went wrong." "When everything went wrong on June 4, 1942, he responded by keeping a clear head and making the correct decisions," including "one of the most important decisions made by any American military commander in all of World War II."

Rigby argues "much recent literature on the battle . . . claims that the Americans did not so much win the Battle of Midway, but rather that the Japanese lost it." "There is a wealth of evidence attesting to the complacency and poor planning with which the Japanese approached the Midway battle."

"Chance did play a role in the battle, but it is grossly inaccurate to say that Midway was an accidental victory." Rigby endeavors to set the record straight on the battle, too. Wade McClusky covers the strategic actions of the battle not just as background but to illustrate how the differences between the management of the pilots from the Hornet contrast with those of the Yorktown and the Enterprise that led to McClusky's actions.

Clarence Wade McClusky Jr., from a large Irish family in Buffalo, did exceptionally well in his admittance to the Naval Academy. "He got into just enough trouble to be respectable, but not enough to endanger his naval career." As an underclassman, he served on battleships on summer cruises to Europe but also suffered, as did other cadets, "a hazing regimen that was often quite violent."

"Earning his pilot wings in 1929," the later hero of Midway began his career "on the ground floor of naval aviation, and its attendant controversies." McClusky went on active duty one year before the "Navy received its first two true aircraft carriers."

Rigby tells an exciting and epic tale with action coming right away in the first chapters. The author makes the book's argument at the beginning and McClusky's life follows including a detailed account of Midway and his long service in the Navy afterward.

The structure of Wade McClusky proves complicated at times but more so because of the author making almost irrelevant comparisons that distract from his narrative. Rigby includes detailed annotation, illustrations, a bibliography, and discussion of sources throughout the text.