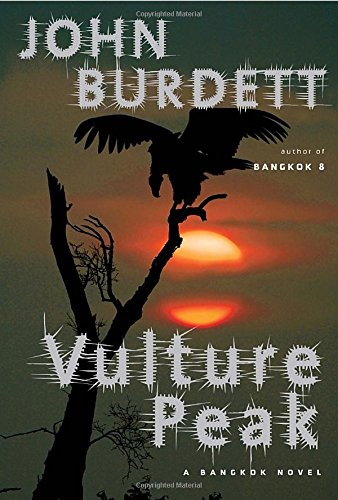 “Vulture Peak is a modern morality tale with all the requisite bells and whistles and much more: a salutary warning for the Internet age. ‘It’s a beautiful, global world, so long as you keep your eyes shut.’”

“In the morning I woke to feel the world on my shoulders, which is where it normally sits. I know there are other cops all over the planet who feel the same way. The steady accumulation of human dirt—let’s call it evil—makes it a little harder, day by day, to find the light.”

So observes the detective protagonist of John Burdett’s Vulture Peak. So far, so crime-thriller-typical. We’re used to this type, aren’t we? The world-weary cop, beaten down by the weight of all he’s endured. The policeman who’s seen morality so compromised he can barely even understand what’s right and wrong anymore, let alone drag himself out of the darkness. Characters like this populate virtually every such genre novel that hits the bestseller lists.

But that’s where the similarities end. Although author Burdett’s hero, Detective Sonchai Jitpleecheep, faces a moral dilemma in this novel, it is one which is at least three steps removed from those usually faced in genre fiction. Sonchai might suffer from the travails of being a cop, but he is working to a code that is at times wholly alien to the western reader.

Here, time and again, John Burdett breaks the crime-thriller mold. And then reassembles it, piece by piece. His narrative becomes more than the sum of its parts. This is a philosophical treatise, a travelogue, a vast character study, and a subversive anticapitalist tract. But it is also thoroughly enjoyable.

Even the tone of the stories seems strange. Through his first-person narrative, we are addressed as “Dear Farang Reader” or “DFR,” a twist on Jane Austen’s “Dear Reader,” which isn’t your typical way of addressing the reader of a rather bloody crime story. And we’re introduced to a whole new vocabulary too: farang is the Thai word for westerner, katoey means transsexual (more on that later).

Of course, to many, something of the strangeness is lost. This is after all, the fifth in Mr. Burdett’s Bangkok series. Fans have come to know and love his diverse cast list and will welcome them back like old friends. But for the virgin John Burdett reader, discovering the characters that populate his Bangkok is an unrivaled pleasure.

Meet Sonchai, our not exactly run-of-the-mill detective. Witty and observant, Mr. Burdett helps us see the world through his eyes—a worldview that is blurred and not just by the smoke of burning incense. Sonchai is “the half-farang bastard son of an American serviceman and so can pass for near white.”

Known, only half-jokingly, as the “Third World Cop” by one of his colleagues in the Chinese police force, he was raised in a brothel by his mother, the madam. He’s partial to a few puffs on a spliff, and he’s a rather less devout Buddhist than he’d like to be. As his boss observes of him: “What scares you is the thought you might not be on the side of the angels. I think you’re staging this whole drama because you fear for your karma.”

Sonchai is accompanied by his partner, Chanya, “a former whore who’d worked in my mother’s bar, the Old Man’s Club, where we fell in love,” by his sometimes-willing sidekick, the katoey Lek, “a transsexual permanently on the verge of the operation that will permanently turn him into a woman,” and Sonchai’s boss Vikorn, a colonel in the Royal Thai Police who is variously described alternately as “master crook of the universe,” or “a criminal genius almost on a level with Mao” who “prowls instead of walks.”

Another character who puts in a reappearance is Vikorn’s arch nemesis, General Zinna of the Royal Thai Army. Between them, they have almost the entire Thai black market covered. And Sonchai must plot a course through this moral minefield, trying to do what he believes is right, trying to work out whom he can trust—and whom he cannot.

The new case here is high profile, involving the trafficking of human organs. Early in the novel, Sonchai discovers that he has to unwittingly “sell . . . 1,764 human eyes” in Dubai. He’s been used as a mule, when he believed he was simply visiting in an information gathering exercise. But the motivations of the characters surrounding Sonchai in this murky world are clouded from the start.

In Dubai, Sonchai encounters the Vulture Twins, two amoral Chinese women who are right at the heart of the organ trafficking. On a plane trip to Monte Carlo, the pair bet on the destination of a fly, waging upwards of $50,000 on this whim.

Later, they are described as using “human organs as betting chips.” This is a world in which: “the human being has already been commodified by stealth. In the future everybody is viewed as an item for sale. Crowds become sources of stupendous wealth, so long as you can get away with murder—as the rich and powerful always do. . . . It’s market logic: the only true god.”

And: “Zinna sells Burmese and Chinese body parts, and business is booming. They say it’s better than methamphetamine, and the best news is there’s no law enforcement, not even from the West. Smuggle a little marijuana, and they jump on you. Smuggle a liver that’s been ripped out of a political prisoner, and they wave you on.”

Sonchai’s investigation jetsets him around the world, taking in Phuket, Monte Carlo, Dubai, Shanghai, and “the frozen psychosis of Hong Kong with its motherboard of steel and glass towers . . . ,” and yet he struggles to steady his moral compass because “the plurality of the modern world” has rendered the needle’s direction haywire. Indeed, in various dark, dark musings, it is contended that: “A money-driven morality is no morality at all,” and, “Under materialism everyone is a whore.”

And: “All human beings are cannibals when it comes to brute survival. That is really what the trade is all about, no matter how they care to dress it up for the folks at home.”

Capitalism itself appears to be the villain of the piece: “You mean whodunit? Only in the more general sense . . . Ronald Reagan, Milton Friedman, Margaret Thatcher, Adam Smith. Capitalism dunit. Those organs are being worn by somebody else right now.”

But, of course, there are real villains whom Sonchai must chase, in an increasingly dangerous game of cat and mouse that stretches across the continents. Vulture Peak is a modern morality tale with all the requisite bells and whistles and much more: a salutary warning for the Internet age. “It’s a beautiful, global world, so long as you keep your eyes shut.”